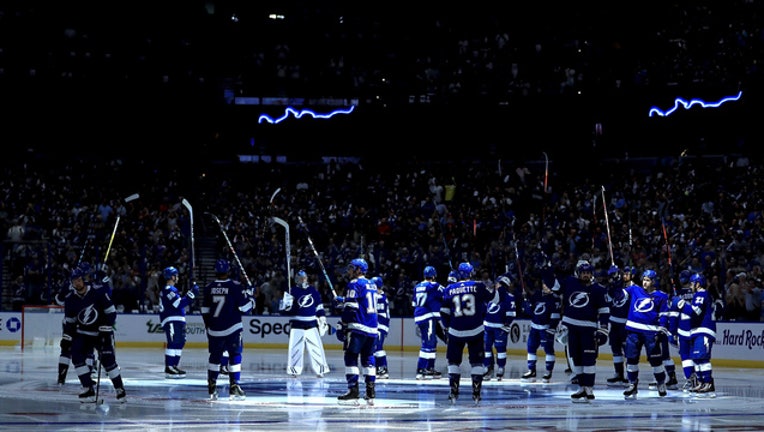 TAMPA, FL - OCTOBER 06: The Tampa Bay Lightning acknowledge the crowd during Opening Night against the Florida Panthers at Amalie Arena on October 6, 2018 in Tampa, Florida. (Photo by Mike Ehrmann/Getty Images)

TAMPA, Fla. (AP) - J.T Miller and Nikita Kucherov scored in the shootout and the Tampa Bay Lightning beat the Florida Panthers 2-1 in the regular-season opener for both teams Saturday night.

Florida goalie Roberto Luongo departed midway through the second period with a lower-body injury after teammate Frank Vatrano landed on his extended right leg during a scramble in front of the goal. The 39-year-old Luongo, who stopped all 13 shots he faced in just over 32 minutes, needed help to skate off the ice.

Luongo was also shaken up earlier in the second when he took a shot by Steven Stamkos off the mask.

Lightning goalie Andrei Vasilevskiy made 42 saves in regulation. He made one save in the shootout and had another shot hit the post.

The Lightning got a third-period, short-handed goal from Anthony Cirelli.

Tampa Bay was held scoreless over the final 159:27 in the 2018 Eastern Conference Final in which eventual Stanley Cup champion Washington rebounded from a one-game deficit to win Games 6 and 7.

Jacob MacDonald scored for the Panthers. Florida missed the playoffs by one point last season despite going 25-8-2 after the All-Star break.

Cirelli tied it at 1 by beating James Reimer with 9:15 to play. Reimer stopped 15 shots.

MacDonald scored at 5:58 of the first from the left circle in his first NHL game. The 25-year-old MacDonald is the sixth NHL player born in Oregon.

Florida center Derek MacKenzie left in the first period with an upper-body injury.

NOTES: Lightning F Ryan Callahan (shoulder surgery) is starting the season on injured reserve, but could be back in the next month. C Tyler Johnson (upper body) didn't play, but should return next week. ... Panthers D MacKenzie Weegar (shoulder) sat out, while D Bogdan Kiselevich (jaw), LW Jamie McGinn (back) and D Josh Brown (upper body) are on IR.

Panthers: Will honor the inaugural 1993-94 team as part of their 25th-year celebration before Thursday night's home opener with Columbus.

Lightning: Play the second of a season-opening five-game homestand Thursday night against Vancouver.