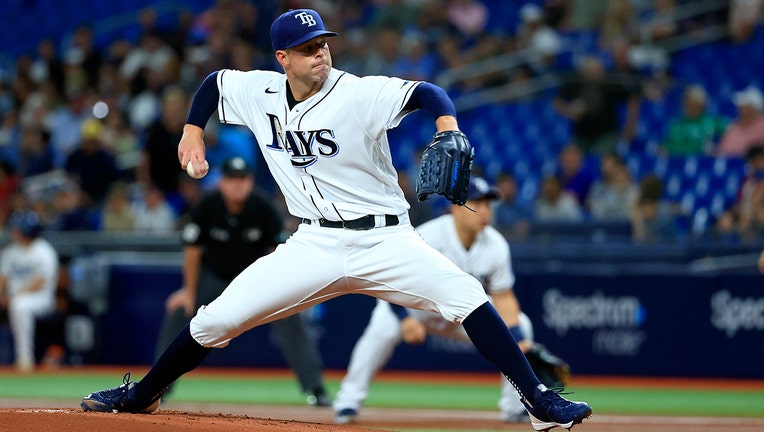 ST. PETERSBURG, Fla. - Chris Sale worked five scoreless innings in his season debut, but the Boston bullpen couldn't hold a two-run lead in a 3-2 loss to the Tampa Bay Rays on Tuesday night.

Sale, out all season with a fracture in his right rib cage, allowed three hits with one walk and struck out five. The lefty reached 97 mph on his fastball during a 78-pitch, 53-strike outing.

The Red Sox are hoping the 33-year-old Sale can boost their chances of making the playoffs. This was just his 10th start for Boston since 2019.

The Rays went up 3-2 in the sixth when pinch-hitter Francisco Mejía had an RBI single off Matt Strahm (3-3). Two more runs scored when the Red Sox made two errors on the same play.

Brooks Raley worked the ninth for his fifth save in six chances.

Boston second baseman Trevor Story left the game when he was hit on the right hand by a pitch he swung at in the fifth inning.

Tampa Bay trailed 2-1 with two out in the sixth when Taylor Walls lined a single off Strahm's left wrist. The left-hander then threw wildly to first base, allowing Isaac Paredes to score. First baseman Franchy Cordero then threw off the mark to the plate, and Mejía scored the go-ahead run.

Alex Verdugo got Boston’s first hit off Kluber when he flared a single to left with one out in the fifth. He went to third when Jeter Downs — Story's replacement — had a soft single to center. Boston took a 2-0 lead on Cordero’s RBI sacrifice bunt and a run-scoring triple by Bobby Dalbec.

Boston All-Star Rafael Devers, who sat out the previous three games with lower back pain, went 1 for 4 as the designated hitter. Regular DH J.D. Martinez, added to the AL All-Star team Tuesday, got the night off.

Sale’s first pitch was briefly delayed when it appeared he dropped his Pitch Com device en route to the mound. He walked from the mound back toward the third-base line where he retrieved it.

Red Sox: INF/OF Kiké Hernández (right hip flexor strain) had his rehab assignment ended and will be re-evaluated. "We had to back off and now see if there’s something else going on that we haven’t seen," manager Alex Cora said.

Red Sox: Sale was reinstated from the 60-day injured list and righty Brayan Bello was optioned to Triple-A Worcester.