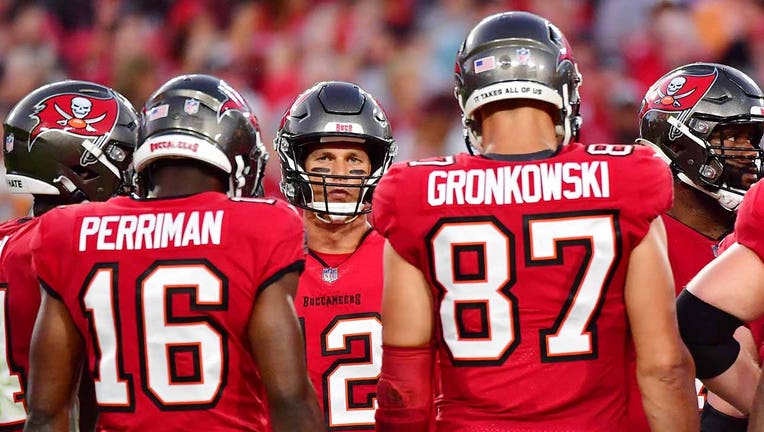 TAMPA, FLORIDA - DECEMBER 12: Tom Brady #12 of the Tampa Bay Buccaneers looks on against the Buffalo Bills during the first quarter at Raymond James Stadium on December 12, 2021 in Tampa, Florida. (Photo by Julio Aguilar/Getty Images)

TAMPA, Fla. - The Tampa Bay Buccaneers have 10 wins and are on the brink of clinching their first division title since 2007.

"We all know we can play a lot better than that," Tom Brady said after Sunday’s 33-27 overtime victory over the Buffalo Bills nudged the Bucs (10-3) closer to their first NFC South title in 14 years.

The Bucs won for the fourth straight time since dropping back-to-back games at New Orleans and Washington, but needed the 700th touchdown pass of Brady’s career to escape with a win after squandering a 21-point halftime lead.

"I have so much respect for that team and especially that defense and what Sean (Payton) does with whoever they have playing quarterback. It’s going to be a heck of a ballgame," Bucs coach Bruce Arians said.

"T-shirt and hat games are big. They’re fun locker rooms," the coach added. "Hopefully, we play (well) enough against them that we can put them on."

Despite being 6-0 at home and in the thick of the race with Arizona and Green Bay for the top playoff seed in the NFC, the Bucs feel they’ve yet to truly hit their stride.

Injuries have contributed to inconsistency on defense, and even the Brady-led offense has been a work in progress.

While the 44-year-old quarterback leads the NFL with 4,134 yards passing and 36 touchdowns, opponents who are able pressure Brady in the pocket have had success slowing down the league’s highest-scoring team.

The Bills did that Sunday after allowing 303 yards and 24 points in the first half, holding the Bucs to three points while Josh Allen rallied Buffalo in the second half to force overtime.

Brady, who earlier in the day became the NFL’s career completions leader, won it with a perfect pass that Breshad Perriman turned into a 58-yard scoring play.

MORE: ‘He was a meanie’: Brady, Gronkowski bond developed slowly but gets better with age

Arians was asked if he learned anything about his team.

"Really nothing new," the coach said. "We know how to win. I would just like to see us not make it that close."

RB Leonard Fournette, who’s working on a one-year contract for the second straight season, is making a strong case to be part of Tampa Bay’s future as an every-down back. He had another big game Sunday, rushing for 113 yards on 19 carries and scoring on a 47-yard run in the first quarter. In addition to rushing for 778 yards and eight TDs, the fifth-year pro is third on the team with 62 receptions for 421 yards and two TDs.

Fournette rejects the notion that he’s proving he can be an every-down back.

Injuries continue to impact the secondary. The return of CBs Carlton Davis and Sean Murphy-Bunting from injured reserve has helped. Arians also thinks Richard Sherman, who played against the Bills after being activated from IR, can contribute as a cornerback and safety down the stretch. The veteran had his 37th interception on Sunday.

Perriman was targeted by Brady just one time against the Bills before the speedy receiver’s fourth reception since signing with Tampa Bay last month beat the Bills.

"With this offense, you wait for your turn," Arians said. "And when your turn comes, you better make the play."

Antonio Brown’s three-game suspension for misrepresenting his COVID-19 vaccination status ends next week. Arians said Monday that he hasn’t made a decision on Brown’s future with the team.

"I haven’t made that determination yet, but we’ll see how it goes," Arians said.

"Gio is in the (MRI) tube, so we don’t know yet the extent of his injury," Arians said. "Dean is just dealing with wooziness and what’s causing it, whether it’s concussion-related — which he didn’t take a hit — or if it was just something else like a head cold or something. We’ll see what’s going on with him."

The Bucs can clinch the NFC South and guarantee themselves at least one home playoff game by beating the Saints this week.