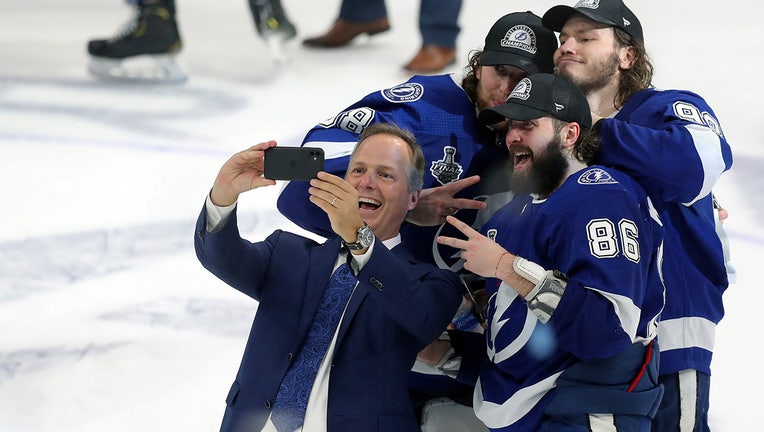 Head coach Jon Cooper of the Tampa Bay Lightning takes a selfie with Andrei Vasilevskiy, Mikhail Sergachev, and Nikita Kucherov after defeating the Montreal Canadiens 1-0 in Game Five to win the 2021 NHL Stanley Cup Final at Amalie Arena on July 07,

TAMPA, Fla. - When the Tampa Bay Lightning had their first chance to clinch the Stanley Cup championship in the 2020 playoff bubble, Jon Cooper recalls how he let his mind drift to what the celebration would be like.

"You’re thinking about raising the Stanley Cup, what’s it going to be like after, lifelong dreams, who’s going to get the drink out of it," he said. "That’s called channeling your energy in the wrong direction."

After missing their chance to sweep the Montreal Canadiens, Cooper and the Lightning were only steeled further by another dispiriting loss. In a familiar way, too: Motivated by just the latest aggravating defeat throughout the past two playoffs, the Lightning came back two nights later and won the Stanley Cup with a gritty, 1-0 win on Wednesday night.

It put an exclamation point on a second consecutive championship and third overall that was made possible by stumbles along the way. This extraordinary repeat, with each title coming in the midst of a pandemic, was filled with lessons learned.

Cooper said "it’s a journey" to win, and the mile markers along the way were losses: Game 5 of the final to Dallas 10 months ago before winning the Cup in six. Superstar Nikita Kucherov sitting out for the entire regular season after hip surgery. An overtime heartbreaker in the potential semifinal clincher against the New York Islanders. And then that OT loss in Montreal with the Cup in the building. 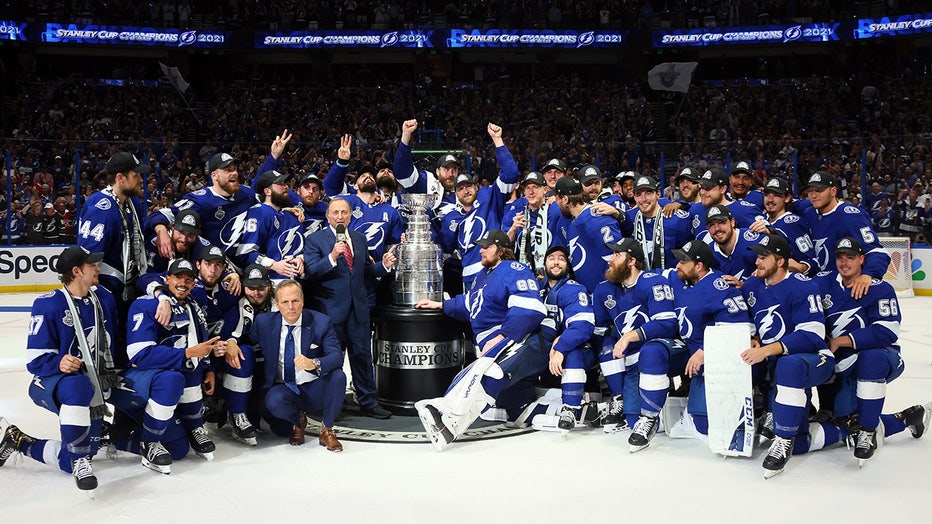 The Tampa Bay Lightning pose with the Stanley Cup after defeating the Montreal Canadiens to win the 2021 NHL Stanley Cup Final. (Photo by Bruce Bennett/Getty Images)

Backstopped by goaltender Andrei Vasilevskiy posting another shutout in a clinching game and going undefeated after losses, Tampa Bay showed the resolve of a champion.

"There’s always big losses," said forward Patrick Maroon, who became the fourth player in NHL history and first in 57 years to win the Cup three years in a row on different teams. "We’ve had some tough ones during the playoffs this year. It’s the way you respond."

Listen to captain Steven Stamkos or veteran defenseman Ryan McDonagh, and it’s clear Cooper’s vision of navigating playoff hockey has filtered down to his players. There was no riding the highs or wallowing in the lows.

The Lightning instead learned to react well to each twist and turn, and the front office learned to build a juggernaut of a team in the salary cap era that has reached the semifinals five times in seven years and the final three times. That’s no easy task, as the players who have been with Tampa since the 2015 final loss to Chicago and beyond know well. Those around in 2019 remember winning the Presidents’ Trophy with the league’s best record and then being swept right out of the playoffs in the first round at the hands of a harder-working, less-talented team in Columbus.

"There’s no doubt that today those experiences are part of our baggage," said general manager Julien BriseBois, who wasn’t afraid to ante up at the past two trade deadlines to go all in. "We can draw on those experiences to prepare for our games. ... They made us better." 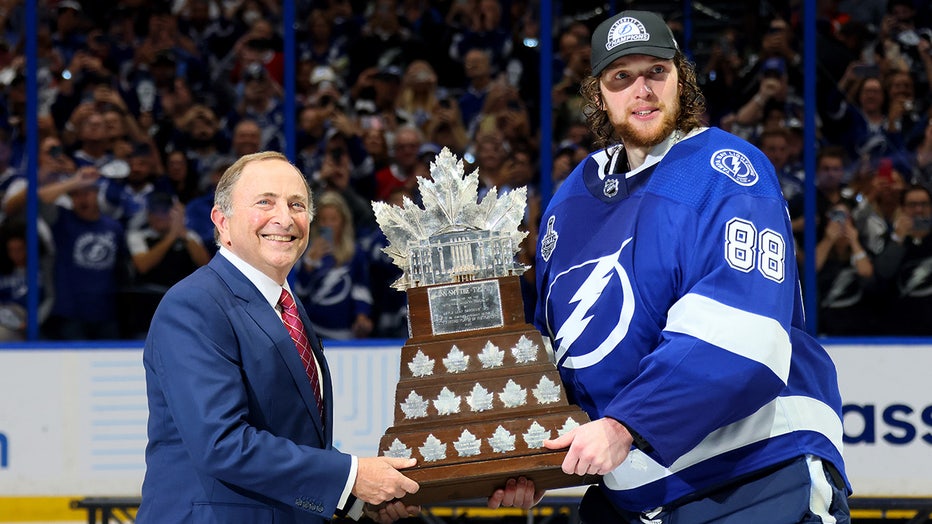 Perhaps it’s so difficult to repeat because it is so exhausting. It’s only been done once since the cap era began in 2005.

What the Lightning did from the time they hoisted the Cup as bubble hockey champions Sept. 29 in Edmonton, Alberta, until Wednesday night was get better from each individual setback.

The first challenge was finding out Kucherov would not be able to play during the condensed, 56-game regular season. Tampa Bay took advantage of salary cap rules to bring back their superstar in time for Game 1 of the first round, which the Lightning started on the road after losing four of six.

Missing the benefits of home didn’t matter, not after almost every NHL team became used to playing in empty or nearly empty arenas.

Losing to the Islanders in overtime in Game 6 put the Lightning in their first must-win situation in 22 months, not since facing elimination against the Blue Jackets in 2019. This time, with Montreal already waiting, Yanni Gourde scored the only goal of the night, Vasilevskiy made 18 saves and Tampa Bay found a way.

"It was all a culmination of two years of work," Cooper said.

Tampa Bay was the overwhelming favorite against the Canadiens, who brought the underdog label and an exciting blend of young and old talent backstopped by standout goalie Carey Price.

The Lightning shrugged off the feel-good Habs, solved Price and relied on their depth to win it all — after they were dealt one final blow to learn and grow from. The morning after their only loss of the final, players at breakfast found renewed focus.

Tampa Bay never lost back-to-back playoff games in either Cup run. It’s impossible to lose a best-of-seven series that way, and Tampa Bay showed why it deserves to be in the modern-day dynasty conversation.

"That’s the mentality we’ve had: Sometimes it takes four games, sometimes seven," Stamkos said. "This group is very mature in terms of realizing the task at hand."

Much like the tail end of the pandemic in the U.S., the Lightning are likely at the end of their reign as perennial Cup contenders with roster moves on the horizon. If this run has shown anything, it’s that they can lose and still find a way to win.