TORONTO - The back-to-back Stanley Cup championships are trying to make it a three-peat as the NHL playoffs began Monday. The Tampa Bay Lightning were on the road, taking on the Maple Leafs in the first round.

Now, even though the first two games are in Toronto, Bolts fans are still expected to be out in full force at Sparkman Wharf, where the official watch party will be held. They hosted watch parties today and will host another Wednesday. You can find more information here: www.nhl.com/lightning/fans/watch-parties.

The Maple Leafs have not won a playoff series since 2004 when the Lightning won their first Stanley Cup. But regardless, Coach John Cooper says they’ve been practicing, playing hard, and are ready to hit the ice.

The Auston Matthews-led Toronto Maple Leafs had a terrific regular season but have yet to prove they have what it takes to be successful in the playoffs.

After winning two Stanley Cup championships, the Tampa Bay Lightning are finally at the White House to be honored for back-to-back Stanley Cup Championships.

While the Lightning’s experience on hockey’s grandest stage has served them well during back-to-back championship runs, the Maple Leafs haven’t won a playoff series since 2004. This is the first-ever postseason meeting between the Atlantic Division rivals.

"It’s been a long-time coming. We haven’t played them. For me it’s not going to change anything. We’ve got a job to do and that’s to win some games here in the playoffs no matter the opponent," said Stamkos, who grew up just outside of Toronto rooting for the Maple Leafs.

With Matthews becoming the first player to score 60 goals in a season since Stamkos did it 10 years ago, Toronto set club records for victories (54) and points (115), finishing second in the Atlantic behind the Presidents’ Trophy-winning Florida Panthers.

Is Stamkos thinking about retirement?

FOX 13 Sports' Kevin O'Donnell asks Steven Stamkos - the most accomplished player to ever put on a Lightning sweater - if he thinks about retirement as he plays his 14th year in the NHL.

MORE: Steve Stamkos talks past and future, 14 years into his career

Tampa Bay got a team-leading 42 goals and 106 points from the 32-year-old Stamkos and finished third in the division with 51 victories and 110 points.

"You sit back, we have an off day, and say: ‘Wow, this team won 51 games and that’s a hell of an accomplishment,’" Lightning coach Jon Cooper said. "But it will be long forgotten once we head to Toronto because it’s a whole different season now."

Toronto’s playoff failures over the past two decades include squandering a 3-1 series lead against Montreal in the opening round in 2021. 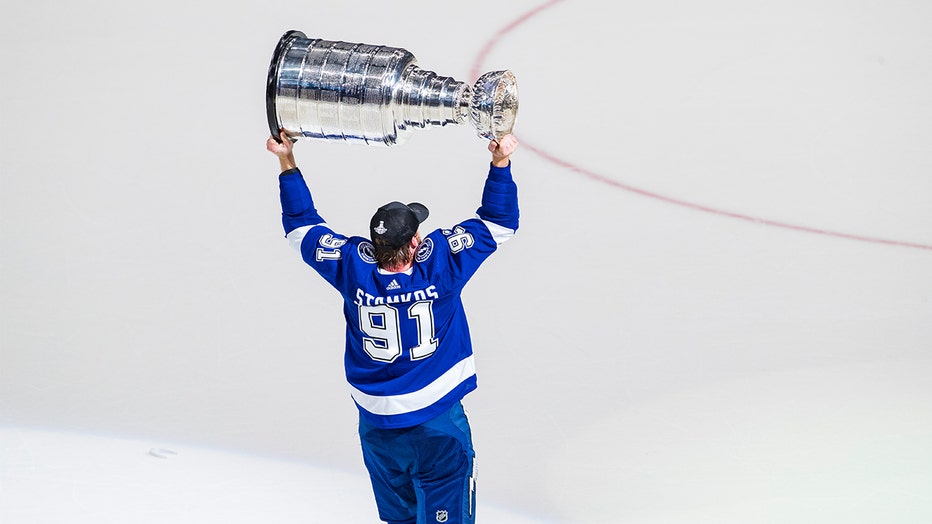 The team returned this year, determined to learn from its mistakes and not get caught up in the day-to-day highs and lows of the regular season.

Or, lingering outside chatter about Toronto’s postseason futility.

"Everyone has experience and learns from the past, good or bad," Toronto captain John Tavares said. "You have to grow from that, whether it’s as a hockey player or even as a person."

"There’s always topics of conversation floating around," Matthews offered. "There’s only so much that we can control."

The Maple Leafs embrace the challenge of measuring their progress against the two-time defending Cup champions, whose star-studded lineup includes Nikita Kucherov, Bryaden Point, Victor Hedman and Andrei Vasilevskiy, the winning goaltender in every Tampa Bay playoff victory during its back-to-back run.

"We have absolute respect for the Tampa Bay Lightning in what they’ve accomplished and who they are," coach Sheldon Keefe said. "Yet we have great belief in our own group. We’re ready for a battle."

The Lightning will be back in Tampa Friday and Sunday for Games 3 and 4.