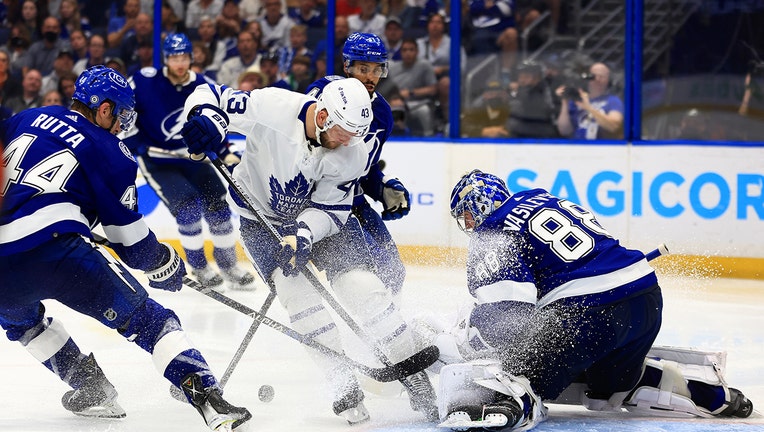 TAMPA, FLORIDA - APRIL 04: Andrei Vasilevskiy #88 of the Tampa Bay Lightning stops a shot from Kyle Clifford #43 of the Toronto Maple Leafs in the third period during a game at Amalie Arena on April 04, 2022 in Tampa, Florida. (Photo by Mike Ehrmann/

TAMPA, Fla. - Auston Matthews had three goals to tie the franchise single-season record for goals with 54, and the Toronto Maple Leafs beat the Tampa Bay Lightning 6-2 on Monday night.

Matthews, who also had an assist and extended his goal streak to six games. completed his seventh career hat trick — and fourth this season — from the slot to give Toronto a 5-2 lead at 7:08 of the third. The center equaled Rick Vaive's mark set in 1981-82.

Mitchell Marner had a goal and two assists, giving him 22 points (six goals, 16 assists) during a 10-game point streak. He also recorded his sixth straight multi-point game as the Maple Leafs took a two-point lead over Tampa Bay for second place in the Atlantic Division. Marner scored his goal at 11:24 of the third.

Pierre Engvall and Alexander Kerfoot had the other Toronto goals. Jack Campbell had 32 saves.

READ: A humble Victor Hedman finds another level 13 years after being drafted by the Lightning

Matthews put Toronto up 2-1 with a wrist shot from the left circle 1:46 into the second.

After Rutta scored four minutes later, the Maple Leafs took a 4-2 advantage on Matthews’ low-slot redirection with 10:03 left in the second and Kerfoot’s in-close goal 2:28 later.

Engvall opened the scoring on Toronto’s first shot 1:59 into the game.

Kucherov tied it at 1 from the left circle right off a faceoff win by Steven Stamkos at 6:24 of the first.

Matthews (253) moved past Bob Pulford (251) into ninth place on Toronto’s all-time goals list. He has a point in each of his last 13 games. ... Marner joined Matthews (seven games, 2018-19) as the only Toronto players to have streaks of six or more multi-point games. ... Kucherov has two goals and 10 points during a five-game point streak.

Lightning: At Washington on Wednesday night.