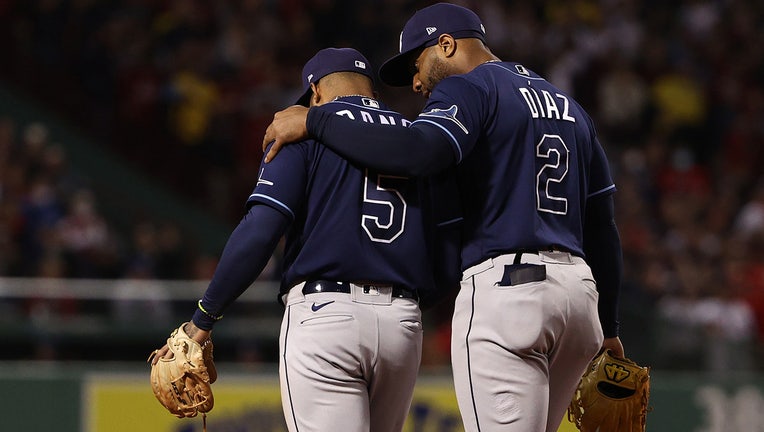 Yandy Diaz comforts Wander Franco after his throwing error in the eighth inning against the Boston Red Sox during Game 4 of the American League Division Series at Fenway Park on October 11, 2021 in Boston, Massachusetts. (Photo by Winslow Townson/Get

BOSTON - Kiké Hernandez delivered Boston's second straight walk-off win, scoring pinch-runner Danny Santana with a sacrifice fly in the ninth inning to send the Red Sox to the AL Championship Series with a 6-5 win over the Tampa Bay Rays on Monday night.

After winning Game 3 of their AL Division Series on Sunday with Christian Vázquez's two-run homer in the 13th, Boston took Game 4 for its first set of consecutive walk-off postseason wins since 2004 ALCS Games 4 and 5, both courtesy of David Ortiz against the Yankees.

Rafael Devers had a three-run home run off rookie Shane McClanahan to ignite a five-run third inning that put Boston in front 5-0. Tampa Bay battled back and tied it in the eighth.

The wild-card Red Sox will await the winner of the other ALDS matchup between the Houston Astros and Chicago White Sox. Houston leads 2-1 going into Game 4 in Chicago on Tuesday, a makeup of Monday’s rainout.

Boston improved to 15-3 in potential clinching postseason games and have won each of their last eight. It brings an abrupt end to the season for the Rays, who’d been eyeing back-to-back trips to the World Series after winning 100 games during the regular season and rolling to AL East title.

Vázquez led off the ninth with a single through the hole to left field and moved to second a sacrifice bunt by Christian Arroyo. Travis Shaw then hit a bouncing ground ball to third that went for an infield single when Yandy Díaz bounced his throw to first baseman Ji-Man Choi.