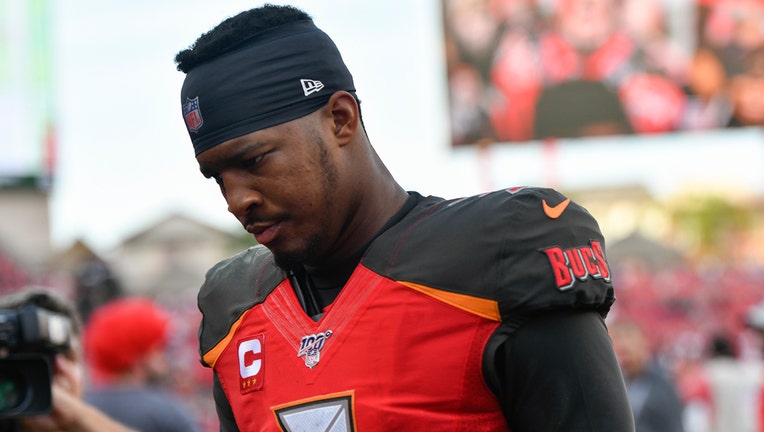 A dejected Tampa Bay Buccaneers Quarterback Jameis Winston (3) walks off the field after throwing a pick-6 in overtime during an NFL game between the Atlanta Falcons and the Tampa Bay Bucs on December 29, 2019, at Raymond James Stadium in Tampa, FL. ( Roy K. Miller/Icon Sportswire via Getty Images )

TAMPA, Fla. - The Tampa Bay Buccaneers certainly have a big decision to make and it won't be an easy one following its 28-22 loss to the Atlanta Falcons on Sunday.

Do they stick with their former No. 1 draft pick or do they cut ties with Jameis Winston? Last night's final game of the season only seemed to highlight their dilemma.

With one last bad throw to close out the season, Winston became part of his own one-man club.

Winston threw a pick-six on the first play of overtime Sunday -- thereby losing the game. With that throw, also become the first NFL quarterback to toss at least 30 touchdowns and 30 interceptions in the same season.

Winston, who led the league in picks and was second with 33 touchdowns, also became the eighth player to surpass 5,000 yards passing in a season. But more than the yardage, his year will be remembered for wild inconsistency that ended in the Bucs missing the playoffs for the fifth year of his five-year stay in Tampa.

Among the more twisted angles to Winston's off-target stay in Tampa: The last pass he threw during his five years with the Bucs was the same as the first - an interception returned for a touchdown. Next, the team has to decide if the 25-year-old, who was picked first in the 2015 draft, is the quarterback of the future or if it's time to part ways.

Coach Bruce Arians might have summed it up best after the game when he said Winston does “so much good and so much outright terrible.”

When Arians was asked if he thinks Winston's pick problem is fixable, he said it's one of the things he's going to have to evaluate.