TAMPA, Fla. - Hurricane Epsilon’s maximum sustained winds dropped slightly as it moved northwest over the Atlantic Ocean on a path that should sideswipe Bermuda on Thursday.

Epsilon’s maximum sustained winds decreased late Thursday morning to 90 mph (150 kph), dropping it from a Category 2 storm to a Category 1 as it swirled near enough for the National Hurricane Center to issue a tropical storm warning for the island. The Miami-based center said Epsilon was located about 235 miles (375 kilometers) east-southeast of Bermuda and moving to the northwest at 7 mph (11 kph).

Forecasters said Epsilon should make its closest approach to Bermuda by Thursday evening. Gradual weakening was expected into the weekend. Large ocean swells could cause life-threatening surf and rip current conditions along the coast of New England and Atlantic Canada during the next couple of days, the hurricane center said.

Epsilon had gained 50 mph (80 kph) in wind speed in just 24 hours to become a major hurricane on Wednesday, officially qualifying as a rapidly intensifying storm. It was the seventh storm this season to power up so quickly.

Over the past couple decades, meteorologists have been increasingly worried about storms that blow up from nothing to a whopper, just like Epsilon. Forecasters created an official threshold for this dangerous rapid intensification — a storm gaining 35 mph (56 kph) in wind speed in just 24 hours. 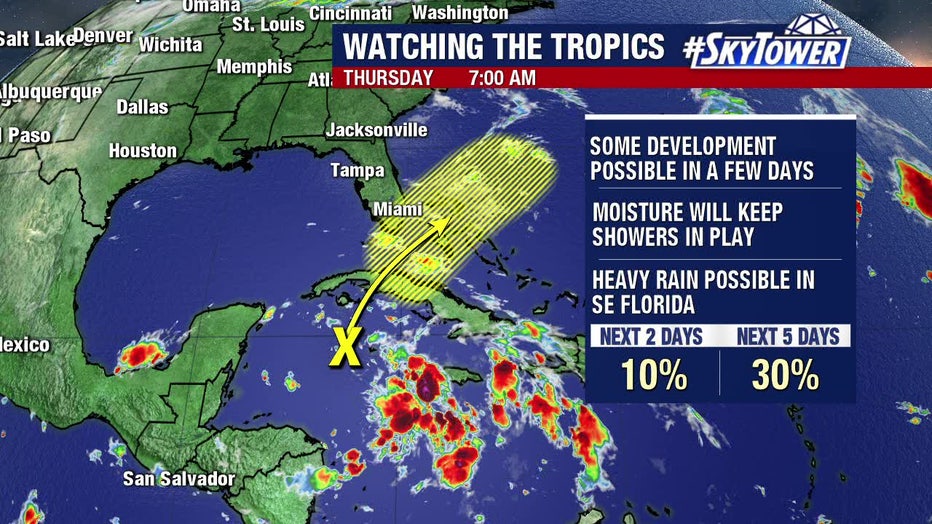 This year’s season has had so many storms that the hurricane center has turned to the Greek alphabet after running out of official names.

Meanwhile, forecasters say an area of low pressure in the Caribbean has a chance of developing into a tropical system as it passes by south Florida over the next few days. It's expected to increase Florida's rain chances, regardless of its development.