Boulder Police officials updated the public regarding Monday’s mass shooting at the King Soopers grocery store that left 10 people dead, including the first police officer to arrive on the scene.

BOULDER, Colo. - Police on Tuesday identified a 21-year-old man as the suspect who opened fire inside a crowded Colorado supermarket, and court documents showed that he purchased an assault rifle less than a week before the attack that killed 10 people, including a police officer.

Supermarket employees told investigators that Ahmad Al Aliwi Alissa shot an elderly man multiple times outside the Boulder grocery store before going inside, according to the documents. Another person was found shot in a vehicle next to a car registered to suspect’s brother. The documents did not say where the gun was purchased.

Authorities said Ahmad Al Aliwi Alissa was from the Denver suburb of Arvada and that he engaged in a shootout with police Monday afternoon inside the store. The suspect was being treated at a hospital and was expected to be booked into the county jail later in the day on murder charges.

Investigators have not established a motive, but authorities believe he was the only shooter, Boulder County District Attorney Michael Dougherty said.

RELATED: 21-year-old man to be charged with 10 counts of first-degree murder in Boulder grocery store shooting

A law enforcement official briefed on the shooting told The Associated Press that the gunman used an AR-15 rifle, a lightweight semiautomatic rifle. Officials were trying to trace the weapon. The official was not authorized to speak publicly and spoke to AP on condition of anonymity.

The suspect’s family told investigators they believed Alissa was suffering some type of mental illness, including delusions. Relatives described times when Alissa told them people were following or chasing him, which they said may have contributed to the violence, the official told AP.

The attack sent terrorized shoppers and employees scrambling for cover. It was the nation’s deadliest mass shooting since a 2019 assault on a Walmart in El Paso, Texas, where a gunman killed 22 people in a rampage that police said targeted Mexicans. 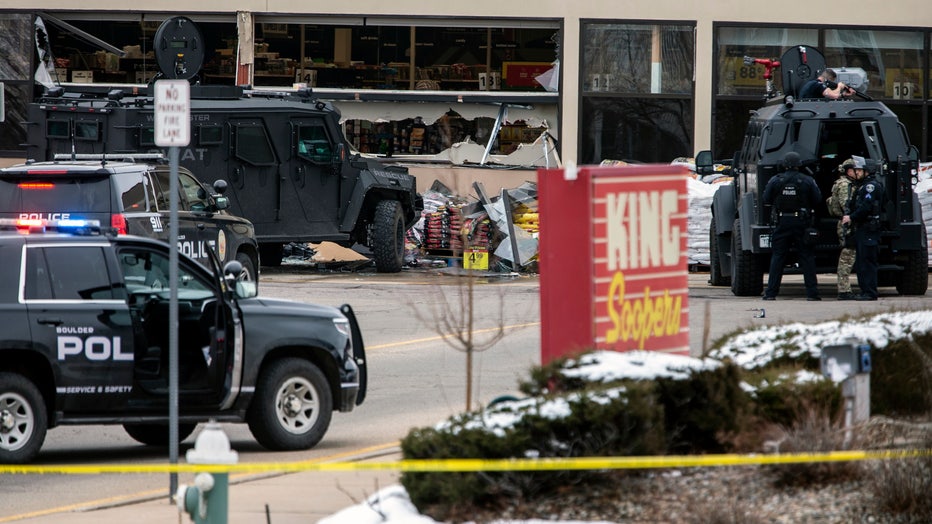 Smashed windows are left at the scene after a gunman opened fire at a King Sooper's grocery store on March 22, 2021 in Boulder, Colorado. Ten people, including a police officer, were killed in the attack. (Photo by Chet Strange/Getty Images)

Hundreds of police from throughout the Denver area responded to the attack, converging on a King Soopers supermarket in a busy shopping plaza.

SWAT officers carrying ballistic shields slowly approached the store as others escorted frightened people away from the building, which had some of its windows shattered. Customers and employees fled through a back loading dock to safety. Others took refuge in nearby shops.

"This is a tragedy and a nightmare for Boulder County," Dougherty said. "These were people going about their day, doing their shopping. I promise the victims and the people of the state of Colorado that we will secure justice."

Boulder Police Chief Maris Herold identified the slain officer as Eric Talley, 51, who had been with the force since 2010. He was the first to arrive after responding to a call about shots fired and someone carrying a rifle, she said. 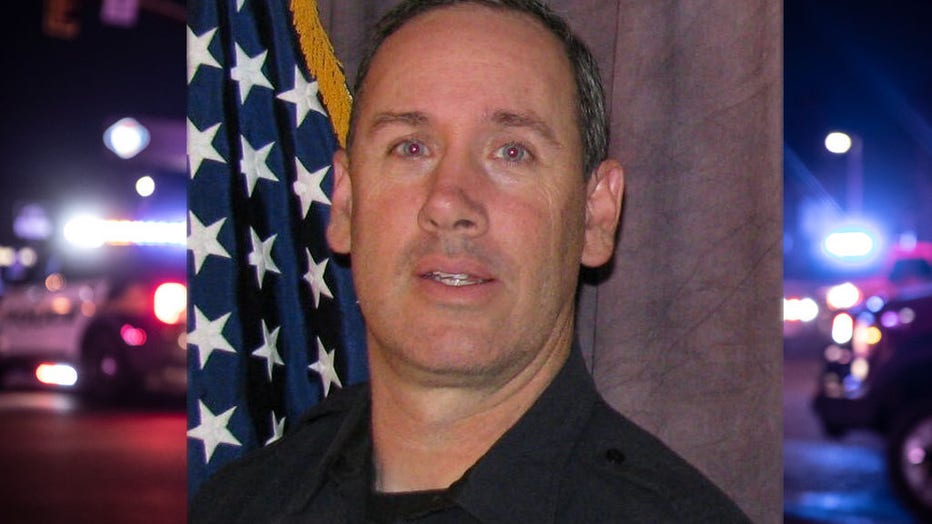 "He was by all accounts one of the outstanding officers of the Boulder Police Department, and his life was cut too short," Dougherty said.

Talley was the father of seven, his youngest seven years old, his father told Fox 31 Denver.

"He loved his kids and his family more than anything," his father said.

Dozens of police and emergency vehicles, their lights flashing, escorted an ambulance carrying the officer from the shooting scene after nightfall. Some residents stood along the route, their arms raised in salute.

President Joe Biden announced that flags nationwide would be lowered in memory of the victims — an order that comes just as a previous flag-lowering proclamation expired for those killed in the Atlanta-area shootings. Together the two orders mean near-continuous national mourning for almost two weeks.

The attack in Boulder, about 25 miles northwest of Denver and home to the University of Colorado, stunned a state that has seen several mass shootings, including the 1999 Columbine High School massacre and the 2012 Aurora movie theater shooting.

Monday's attack was the seventh mass killing this year in the U.S., following the March 16 shooting that left eight people dead at three Atlanta-area massage businesses, according to a database compiled by The Associated Press, USA Today and Northeastern University.

It follows a lull in mass killings during the coronavirus pandemic in 2020, which had the smallest number of such attacks in eight years, according to the database, which tracks mass killings defined as four or more dead, not including the shooter.

Rep. Joe Neguse, a Democrat whose district includes Boulder, said Tuesday on "CBS This Morning" that "enough is enough" when it comes to political impasses that keep gun control laws from passing Congress.

President Joe Biden gave remarks the day after 10 people were killed in a mass shooting at a King Soopers in Boulder, Colo.

"The time for inaction is over. It does not have to be this way. There are commonsense gun legislation reform proposals that have been debated in Congress for far too long," Neguse said. "The gun lobby and so many others have stopped the ability to make meaningful reforms in the past, but that’s no excuse. I think the American people are tired of excuses."

"Action is needed now to prevent this scourge from continuing to ravage our communities," she said in a statement Tuesday in which she cited House passage of two background checks bills. Those bills are now pending before the Senate.

"While we await further information on the details of this heinous crime, we continue to stand with victims, families and young people across the country saying, ‘Enough is enough.’"

Sarah Moonshadow and her son, Nicolas Edwards, had just bought strawberries inside the supermarket when they heard gunfire. Moonshadow told The Denver Post they ducked and "just ran." Outside, Edwards said, arriving police pulled up next to a body in the parking lot.

Video posted on YouTube showed one person on the floor inside the store and two more outside on the ground. What sounds like two gunshots are heard at the beginning of the video.

Matthew Kirsch, the acting U.S. attorney for Colorado, pledged that "the full weight of federal law enforcement" would support the investigation. He said investigators from the Bureau of Alcohol, Tobacco, Firearms and Explosives were at the crime scene, along with FBI agents.

Colorado Gov. Jared Polis said in a statement that the state had seen "the face of evil."

The King Soopers chain said in a statement that it was offering prayers and support "to our associates, customers, and the first responders who so bravely responded to this tragic situation."