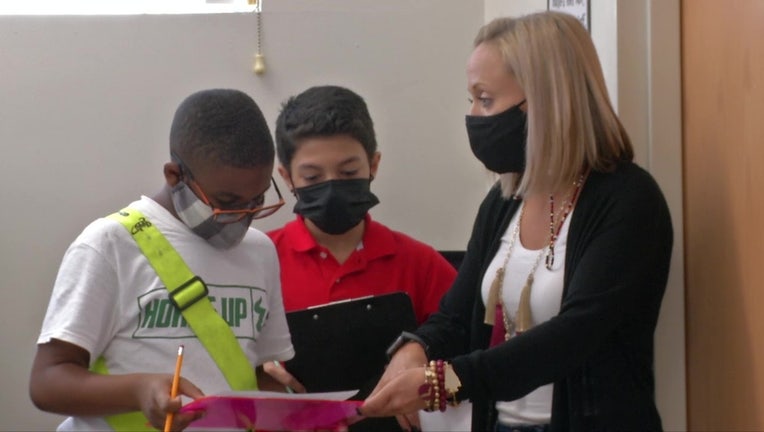 PHOENIX - A judge on Monday struck down Republican-passed Arizona laws that block schools from requiring masks and restrict the power of local governments to impose COVID-19 requirements, the latest turn in a nationwide legal battle over pandemic rules.

If it withstands a promised appeal, the ruling by Maricopa County Superior Court Judge Katherine Cooper could clear the way for Arizona cities and counties to enact mask requirements. At least 29 public school districts had defied the laws and enacted their own mask requirements.

Cooper’s sweeping ruling also struck down a number of non-virus provisions that were slipped into the state budget and an entire budget measure that had served as a vehicle for a conservative policy wish list. They included a required investigation of social media companies and stripping the Democratic secretary of state of her duty to defend election laws.

The ruling comes as the fight over school masks and other COVID-19 restrictions has moved into courtrooms across the U.S. Lawsuits have been filed in at least 14 states either for or against masks in schools. They directly challenge either state rules banning masks or local school board policies mandating them.

In Texas, dozens of school districts have defied Republican Gov. Greg Abbott’s mask mandate ban, but the state’s highest court sided with him last month. In Florida, an appeals court overruled a lower court this month and allowed Republican Gov. Ron DeSantis’ ban on school mask mandates to go back into effect. The case has ping-ponged between federal and state courts.

A Florida judge ruled Governor Ron DeSantis' executive order banning mask mandates in schools was unconstitutional while also rejecting many of the anti-mask claims DeSantis made when issuing the ban back in July.

A federal judge in Iowa blocked a state law that bans school masks.

Parents are split, with some scared that their children could be exposed to the coronavirus without a mask mandate and others saying their children are at little risk and that mask requirements harm their kids. The federal Centers for Disease Control and Prevention recommends mask-wearing in schools, and children 12 and under are not yet eligible for vaccines.

In Arizona, a coalition of educators and allies had sued to challenge laws prohibiting public school districts from imposing mask requirements, colleges from requiring vaccinations for students, and communities from establishing vaccine passports for entry into large events, businesses and other places. It also challenged a broad invalidation of any other local virus measure.

The coalition argued a large number of Arizona children would get sick with COVID-19 if the new laws weren’t blocked. The restrictions had been written into state budget measures that were passed near the end of the legislative session with only support from majority Republicans.

The judge said the laws violate constitutional requirements that the content of legislation is described in its title and is confined to a single subject. State attorneys argued that all the provisions had something to do with spending for education or health and that the Legislature didn’t need to be more specific.

"That is not correct," Cooper wrote. "The Legislature has discretion to title a bill but, having picked a title, it must confine the contents to measures that reasonably relate to the title and to each other to form one general subject."

A spokesman for Republican Gov. Doug Ducey called the ruling "clearly an example of judicial overreach" and vowed an appeal.

"Arizona’s state government operates with three branches, and it’s the duty and authority of only the legislative branch to organize itself and to make laws," C.J. Karamargin said in a statement. "Unfortunately, today’s decision is the result of a rogue judge interfering with the authority and processes of another branch of government."

The law barring mask mandates at public schools was scheduled to take effect Wednesday. The ruling was a relief for the districts that required masks, accounting for more than 334,000 students and nearly 500 schools.

The court action has far-reaching ramifications for the Legislature, which has long ignored the constitutional requirement that budget bills only deal with spending items. Lawmakers have packed with them policy items, and this year majority Republicans were especially aggressive.

An entire budget measure that served as a catch-all for a wish list of conservative policies was found to be unconstitutional Monday as well other laws unrelated to COVID-19 prevention efforts. One prohibits the use of state money for teaching critical race theory, a way of thinking about America’s history that centers on the idea that racism is systemic in the nation’s institutions and they function to maintain the dominance of white people.

The judge pointed to the single-subject rule to overturn SB1898, the bill filled with GOP policy wishes. It included what she called "multiple, unrelated subjects" like dog racing, the governor’s emergency powers, local COVID-19 measures and much more.

"None of these subjects have any logical connection to each other nor ‘fall under some one general idea,’" Cooper wrote.

Other parts of that law would have let the state Game and Fish Department to register voters and would have set up a special legislative committee to review the results of the Arizona Senate’s partisan audit of the 2020 election.

An attorney representing the state said the Constitution does not require lawmakers to specify each item they include in budget bills that direct spending and that a ruling agreeing the Legislature violated the Constitution could upend years of budget measures that added unrelated policy items.