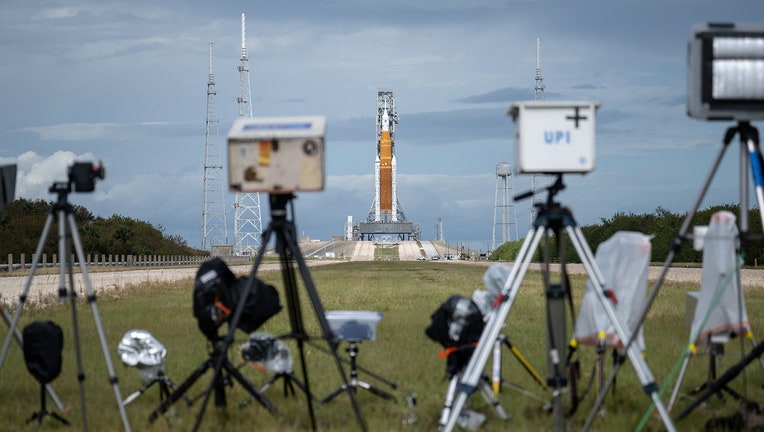 Media remote cameras are setup outside Launch Pad 39B and aimed at NASA’s Space Launch System (SLS) rocket with the Orion spacecraft aboard as preparations for launch continue, Sunday, Nov. 13, 2022, at NASA’s Kennedy Space Center in Florida. (NASA/B

CAPE CANAVERAL, Fla. - NASA started the countdown Monday for this week’s planned liftoff of its new moon rocket, although hurricane damage could cause yet another delay for the test flight.

Hurricane Nicole’s high winds caused a 10-foot (3-meter) section of caulking to peel away near the crew capsule at the top of the rocket last Thursday. Mission managers want to make sure the narrow strip won’t damage the rocket if it breaks off during liftoff. A final decision was expected Monday evening.

Liftoff is scheduled for the early morning hours of Wednesday from NASA's Kennedy Space Center, with test dummies rather than astronauts on board. It’s the first test flight for the 322-foot (98-meter) rocket, the most powerful ever built by NASA, and will attempt to send the capsule into lunar orbit. 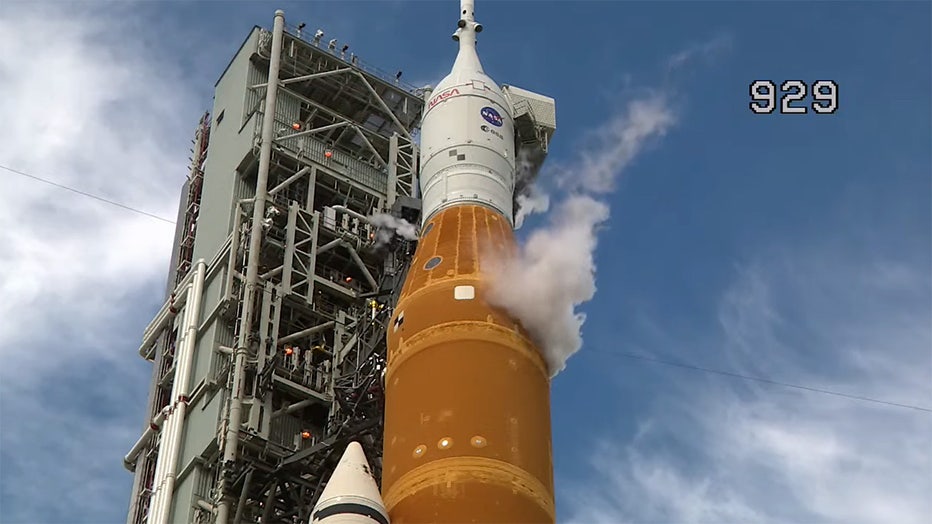 In this shot from NASA TV, the Artemis I fueling test is underway on Wednesday, Sept. 21.

The nearly monthlong $4 billion mission has been grounded since August by fuel leaks and Hurricane Ian, which forced the rocket back into its hangar for shelter at the end of September. The rocket remained at the pad for Nicole; managers said there wasn't enough time to move it once it became clear the storm was going to be stronger than anticipated.

The space agency plans to send astronauts around the moon in 2024 and land a crew on the lunar surface in 2025.

Astronauts last visited the moon in December 1972, closing out the Apollo program.

RELATED: These recycled space shuttle parts are now powering Artemis I to space

Meet the LEGO astronauts aboard Artemis I

No small steps here: NASA managers explain how they're using Artemis missions to inspire the next generation of scientists and engineers.

A microwave oven-size NASA satellite, meanwhile, arrived Sunday in a special lunar orbit following a summer liftoff from New Zealand. This elongated orbit, stretching as much as tens of thousands of miles (kilometers), is where the space agency plans to build a depot for lunar crews. The way station, known as Gateway, will serve astronauts going to and from the lunar surface.

The satellite, called Capstone, will spend six months testing a navigation system in this orbit.