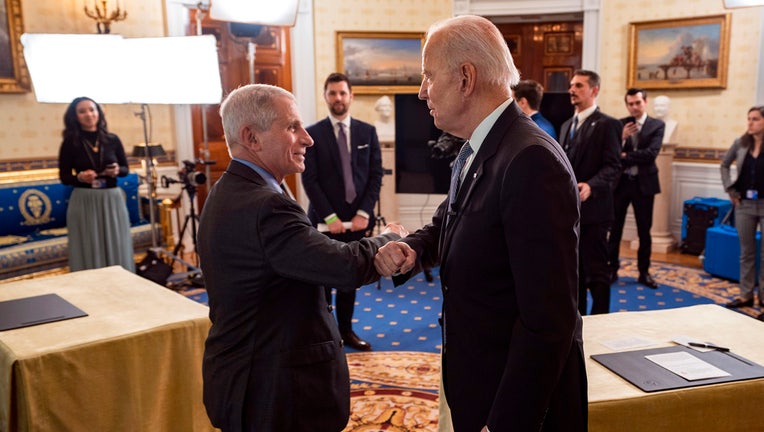 President Joe Biden participates in a townhall with chief medical adviser to the president Dr. Anthony Fauci on Monday, May 17, 2021, in the Blue Room of the White House. (Official White House Photo by Adam Schultz)

President Biden said he is "very confident" in Dr. Anthony Fauci amid Republican attacks on his chief medical adviser after the revelation of thousands of his emails from the early days of the coronavirus pandemic.

The president was updating reporters as he departed Rehoboth Beach, Del., and when he walked out of the room, one shouted to ask if he is "still" confident in Fauci, director of the U.S. National Institute of Allergy and Infectious Diseases (NIAID). Moments later, Biden popped his head back in the room and said, "Yes, I am very confident in Dr. Fauci."

Fauci’s emails, which are heavily redacted, have prompted Republicans to demand answers from the NIAID director about why he did not more aggressively pursue the theory that coronavirus could have leaked from the Wuhan Institute of Virology (WIV) in China.

In one February 2020 email, he also said wearing a mask was "not really effective in keeping out the virus," though the disease expert has already admitted he downplayed the effectiveness of masks in part so that supply would not run low for medical professionals.

At the same time, Fox News has confirmed that State Department officials seeking to demand transparency from the Chinese government say they were explicitly told by colleagues not to explore the WIV’s gain-of-function research because it would bring unwelcomed attention to U.S. government funding of it.

"He's been an undeniable asset in our country's pandemic response," Psaki said. "It's obviously not that advantageous for me to relitigate the substance of emails from 17 months ago."

In one email, National Institutes of Health (NIH) Director Francis Collins sent Fauci a link to a Fox News report that gave credence to the theory coronavirus could have originated in the Wuhan Institute of Virology with the subject line "conspiracy gains momentum." Fauci's response is entirely redacted.

In a Feb. 1, 2020, email, immunologist Kristian Andersen wrote to Fauci arguing the virus had "unusual features" that could suggest lab manipulation. Andersen and his team then looked into the theory further, and their studies showed the virus was not a "laboratory construct or a purposefully manipulated virus," according to the emails.

Another email came to Fauci from Peter Daszak, who runs EcoHealth, which received millions in grants from the NIH, including a $600,000 grant from the NIAID that it later paid to the Wuhan Institute of Virology to study the risk that bat coronaviruses could infect humans.

"I just wanted to say a personal thank you on behalf of our staff and collaborators, for publicly standing up and stating that the scientific evidence supports a natural origin for COVID-19 from a bat-to-human spillover, not a lab release from the Wuhan Institute of Virology," Daszak said in an email. Fauci replied: "Many thanks for your kind note."

Fauci has since said he is "keeping an open mind" about the virus's origins.