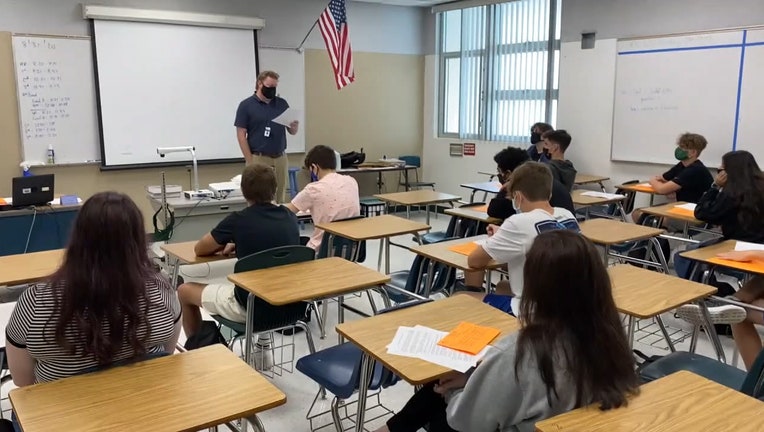 GAINESVILLE, Fla. - Florida’s Legislature is on the verge of requiring public schools across the state to set aside one to two minutes of silence every morning, adding to the mix of school announcements, the Pledge of Allegiance and roll calls.

The House passed HB 529 last month on a 94-24 vote, and a similar bill is making its way through the Senate. In the House, the 24 opponents included 23 Democrats plus Republican Rep. Linda Chaney of St. Petersburg.

Under the proposal, which would cover all K-12 public school classrooms, teachers can not recommend what students do with that time but should encourage parents to have that conversation with their children.

Rep. Randy Fine, R-Palm Bay, who sponsored the House bill, said it would give students, who are so often overwhelmed with technology and social media, a moment to pause and reflect on life. In a committee hearing, he cited the 2018 Marjory Stoneman Douglas High School shooting in Parkland, Florida, as an extreme example of what can happen when students can’t find peace.

"It doesn’t cost anything. It addresses a problem in a small way that our children are having today in our society. It doesn’t have any downside," Fine said in an interview. "Why wouldn’t we do it?"

A version of the bill failed in the Senate last year after also winning approval in the House. This year, it was one of the first legislative proposals to pass the House.

Fourteen states already mandate moments of silence at the beginning of each school day, and seventeen states allow for one although it isn’t required, according to a legislative staff report on the bill. Florida is in the second category, with each school board deciding for itself whether a moment of silence is necessary.

The bill amends a Florida statute that already had allowed for "an objective study of the Bible and religion" in public schools.

Fine, who is Jewish, said the bill is not about religion, as it would also strike the phrase "silent prayer" from that same statute. But others weren’t sure.

Devon Graham, Florida assistant state director of the non-profit American Atheists, has testified in nearly every government meeting about this bill. She said she worried the bill would ostracize students from different religious or non-religious backgrounds.

"The fact that this bill is part of a statute that explicitly describes the study of religion and the Christian Bible in our schools isn’t convincing anyone that this moment of silence isn’t religiously motivated," Graham said at one hearing.

One proponent of the bill is Rabbi Schneur Oirechman, who founded Chabad of Tallahassee and FSU 21 years ago. After California’s Chabad of Poway shooting that killed one woman in 2019, Oirechman said he and a group of other rabbis wrote to Sen. Dennis Baxley, R-Lady Lake, advocating a moment of silence. Baxley sponsored the bill in 2020 and again this year.

This moment of silence has been a Chabad movement since 1983, when famous Rabbi Menachem Schneerson began to speak on the topic, Oirechman said.

"Students should be encouraged by their parents to think about a higher authority and what does God mean to them," Oirechman said. "It’s about instilling values in our children. The parents will tell the children what these values are."

This isn’t the only time that issues of school prayer have been raised in the Legislature this year. One bill proposes that student athletic associations adopt procedures about one- to two-minute opening remarks during sports games. The bill itself does not mention prayer, but one of the bill’s sponsors, Rep. Webster Barnaby, R-Orange City, did during a committee meeting.

Not all teachers are thrilled about the idea of a moment of silence.

Erica Simon, a fourth-grade teacher at Discovery Key Elementary School in Palm Beach County, does not think it would have any effect on students – especially elementary students, who benefit most from being guided in the classroom, she said.

"If I said to my students, ‘OK, we’re gonna have a minute of silence. Think about whatever you’re supposed to be thinking about at this moment,’ a lot of them would just be sitting there," she said. "Nothing would be going through their heads."

Practically, it would be difficult to implement because many students show up late, she said. Simon said she also believes it would take away time from learning, as one or two minutes each day adds up quickly.

"Bills and legislation get put into place by people who are not in a classroom, that don’t have a clue what’s going on inside of the school," she said. "How is one to two minutes of a day going to make any difference in a child’s life?"