TALLAHASSEE, Fla. - Continuing his administration’s campaign against critical race theory, Florida Gov. Ron DeSantis on Wednesday teased legislation that he said would, in part, allow parents to sue schools that teach the theory.

Flanked by Republican lawmakers, parents and Education Commissioner Richard Corcoran, the governor held an event in Wildwood to announce what he called the "Stop Wrongs Against Our Kids and Employees Act," or Stop W.O.K.E. Act. The legislation, which as of Wednesday had not been filed, would be considered during the 2022 session, which will start Jan. 11.

DeSantis decried critical race theory, which is centered on the premise that racism is embedded in American institutions, as "corporate-sanctioned racism" and said the proposal would prohibit training for educators on teaching the theory. 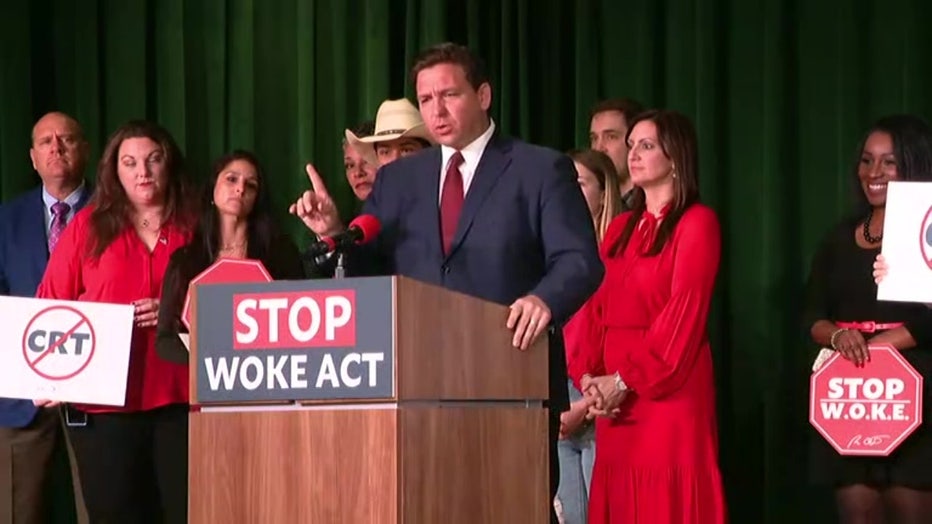 DeSantis and Corcoran this year pushed a proposed rule to eliminate critical race theory from Florida classrooms and instructional materials. The State Board of Education approved the rule in June.

The governor said the new proposal is intended to cement the state rule in law --- strengthening the ability for enforcement.

Republicans throughout the country have rallied behind opposition to critical race theory. But Democrats have largely criticized DeSantis, who is running for re-election in 2022, on the issue, with many arguing critical race theory is not taught in public schools.

"Let’s be clear, Gov. DeSantis and his administration know full well that CRT (critical race theory) is not taught in K-12 schools or workplaces," Sen. Shevrin Jones, D-West Park, said in a statement Wednesday. "It’s unfortunate that instead of running on forward-looking ideas to improve people’s daily lives, Republicans would rather manufacture a crisis out of a non-issue, all in the hopes of fanning the flames of a culture war for political gain."

DeSantis said that under the proposal, parents would be able to recover attorney fees if they successfully sue schools that teach critical race theory in defiance of the state.

"A lot of the time these people will fear lawsuits more than a fine from the state Department of Education because when you do lawsuits, you get discovery, and you’re subject to that. And when they say they’re not doing CRT and then you have all this information showing that they are doing it, it really is an uncomfortable position for them," DeSantis said.

In addition to public schools, DeSantis said the proposal would prohibit colleges and universities from hiring critical-race theory consultants, which the governor argued is a "cottage industry" designed to provide training to teachers and professors.

Corcoran, a former Republican House speaker, said in a statement Wednesday that Florida teachers and students are "under constant threat" by critical-race theory advocates.

But Sean Shaw, an attorney and former Democratic state lawmaker who ran for attorney general in 2018, slammed DeSantis’ proposal and pointed to the part about lawsuits over critical race theory.

"Trial lawyers are only good if we are suing to stop CRT? Not if we are suing to make insurance companies pay up? Florida is pretty damn good at being bad," Shaw tweeted Wednesday, referring to a new state law (SB 76) that sought to reduce litigation about property-insurance claims.

DeSantis, who is widely speculated as a potential 2024 Republican presidential candidate, enlisted critical-race theory detractors from outside of Florida to promote the legislation Wednesday. They included Chris Rufo, director of the Initiative on Critical Race Theory for The Manhattan Institute, a conservative think tank.

"Governor Ron DeSantis is not only protecting all of the employees and students in the state of Florida. He is providing a model for every state in the United States of America," Rufo said in a prepared statement sent from DeSantis’ office.