TAMPA, Fla. - Governor DeSantis said most people who applied for unemployment benefits in March are now receiving benefits if they are, first, eligible and, second, correctly submitted their applications.

He said if people applied for benefits in March and have not yet received a determination, it is likely that they left out information in their claims.

“Nine times out of 10, the application is incomplete,” DeSantis said on Friday, as he asked a reporter to provide him with names of people who say they have not yet received benefits. “If they haven’t been, I want those names. We’ll get it over to the agency and see if we can get working on it.”

However, applicants have told FOX 13 News they feel certain they submitted claims with all the information needed, but the glitchy online system caused some of the data to disappear. According to a source inside the state government, that checks out.

Last week, Gov. Ron DeSantis passed blame for the unemployment mess to his own team. Now he's blaming the unemployed themselves for submitting incomplete claims. But a government source who transfers data told us they do submit everything, and then glitchy system erases information.

The source, who agreed to speak to FOX 13 under the condition of anonymity, is involved in transferring data behind the scenes. Based on their observations, the system appears to erase data after it is entered, which can cause claims to be delayed or denied.

Since DeSantis said Friday he wanted the names of those who claim to still have problems with the CONNECT unemployment system, FOX 13 and other news outlets across the state have collected lists of claimants who say they are stuck in limbo. 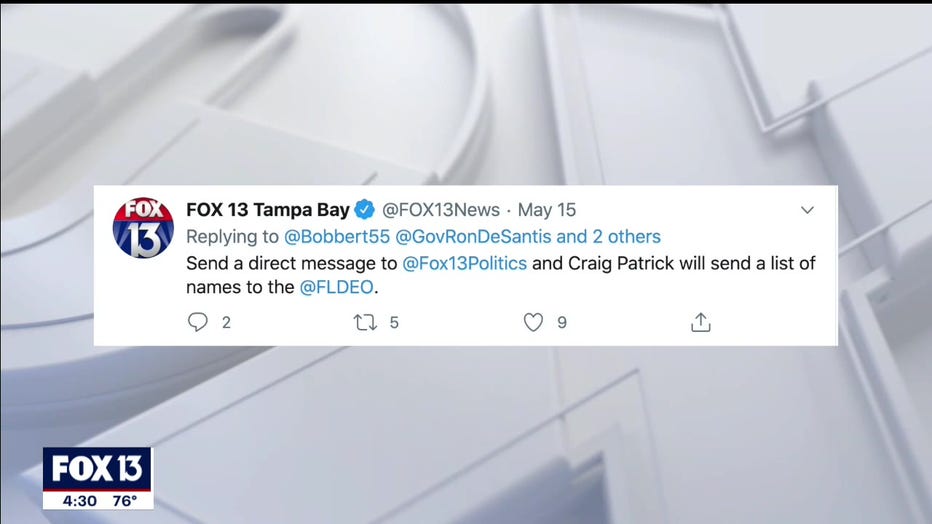 But after asking reporters for names of individuals for his administration to investigate, he deflected responsibility for investigating claimants' eligibility to television news reporters.

“I think it’s [journalists'] responsibility, if you’re representing someone who, in March, hasn’t been paid, to tell your viewers whether that person is a valid applicant or not,” said Governor DeSantis. “You’re not even investigating whether they’re valid claims, you’re just asserting people have applied.”

The governor cited an example of one individual from the Tampa Bay region who is facing delays due to the applicant’s employer challenging the claim. He also said people are applying for benefits who live out of state or outside of the United States.

As of Monday, the state has determined 370,511 applicants are ineligible for state and federal unemployment benefits.

DeSantis solicits names of Floridians still not processed by DEO

Gov. Ron DeSantis bristled at questions about the state’s unemployment system on Friday, suggesting that the unpaid claims were the result of errors or ineligibility.

Meanwhile, FOX 13 asked the DeSantis administration for clarification on other outstanding issues.

Last week the governor said he extended the waiver of the two-week benefit recertification, however, at the same time, his Department of Economic Opportunity announced it reinstated the requirement.

We asked the administration how the governor can waive two-week recertification requirements while DEO reinstated the requirement, as per federal law. We also asked which federal law DEO is referring to and how it mandates claiming weeks for state benefits staring May 10, but not prior weeks.

An administration spokeswoman thanked us for all our questions and said they would respond as quickly as they can.