MIAMI - Taking aim at Silicon Valley, Gov. Ron DeSantis on Monday signed a measure to crack down on large social-media companies that block users from their platforms.

DeSantis, who made the issue one of his top priorities during this year’s legislative session, described Florida as a "trailblazer" and said the bill would protect free speech.

"What we have seen in recent years is a shift away from internet platforms and social-media platforms from really being liberating forces to now being enforcers of orthodoxy," DeSantis said. "So, their primary mission or one of their major missions seems to be suppressing ideas that are either inconvenient to the narrative or which they personally disagree with."

But critics contend it is unconstitutional for Florida to try to regulate how businesses determine what can be posted on social-media platforms. They also pointed to DeSantis making the issue a priority after his ally, former President Donald Trump, was blocked from Facebook and Twitter after Trump supporters stormed the U.S. Capitol on Jan. 6. 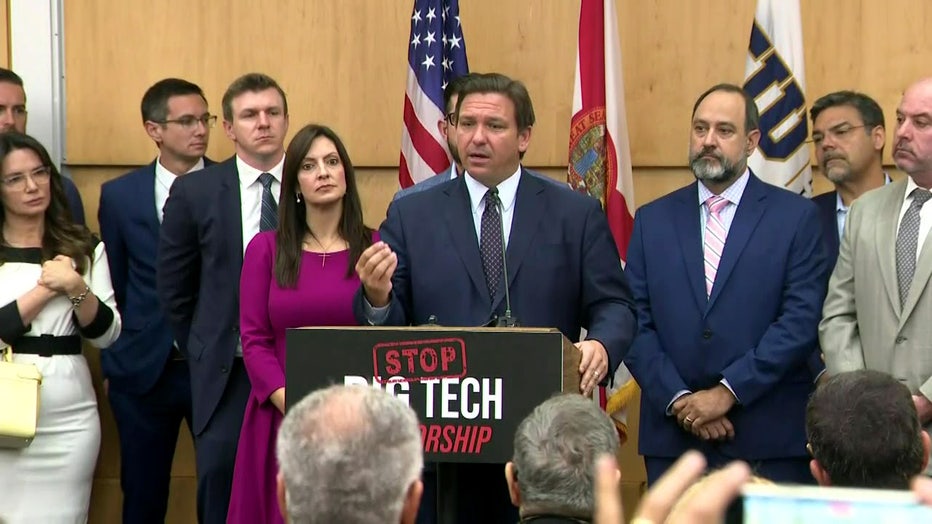 "The Republican less-government crew is at it again inserting government into privately owned social media companies to placate one individual," state Sen. Audrey Gibson, D-Jacksonville, said in a statement Monday. "These enterprises take responsibility for what appears on their platforms and have the right to do so. Vulgarity and inciting violence are not their business model and our legislature should appreciate rather than legislate against such a concept."

DeSantis signed the bill (SB 7072) at Florida International University in Miami during a news conference that tried to draw parallels between big technology companies and dictatorships in Cuba and Venezuela.

The bill, in part, will bar social-media companies from removing political candidates from the companies’ platforms. Companies that violate the prohibition could face fines of $250,000 a day for statewide candidates and $25,000 a day for other candidates.

As an indication of how the bill targets large technology companies, it will apply to platforms that have annual gross revenues of more than $100 million or have at least 100 million monthly individual "participants" globally.

DeSantis and other speakers at Monday’s news conference railed against Silicon Valley.

"I, along with the legislators and this great governor, do not think that a handful of kids behind some desks in Silicon Valley get to be the arbiter of what free speech is," House bill sponsor Blaise Ingoglia, R-Spring Hill said.

DeSantis said Florida will be the first state to "hold Big Tech accountable." His political committee, Friends of Ron DeSantis, quickly sent out a fundraising email touting his approval of the measure.

"It’s time to step up and ensure that we the people, especially our everyday Floridians, are guaranteed protection against the Silicon Valley power grab," DeSantis said during the news conference.

But along with facing opposition from Democratic lawmakers, the bill drew criticism from groups such as the Florida State Hispanic Chamber of Commerce.

"The (bill) compels businesses to host speech that contradicts the terms and agreements to which users agree --- which legal and First Amendment experts have claimed is unconstitutional," Julio Fuentes, president of the Florida State Hispanic Chamber of Commerce, said in a prepared statement. "In the same way that a grocery store can turn customers away for not wearing shoes or shirts in their store, social media companies have the right to turn users away for violating their rules."

TechFreedom, a Washington, D.C-based think tank, also argued that the measure is unconstitutional.

"The bill is extreme. It's a brazen assault on the First Amendment," Corbin Barthold, internet policy counsel for TechFreedom, said in a prepared statement. "DeSantis wants to compel websites to speak. He can’t. He wants those sites to be subject to campaign-finance law. They aren’t. He wants consumer-protection law to erase free-speech rights. It won’t. DeSantis is attacking the very constitutional principles Republicans just spent four years putting conservatives on the courts to protect."