TAMPA, Fla. - Every day, the Florida Department of Health issues a report on the total number of COVID-19 cases in the state, as well as the percentage of all tests that came back positive. The reports are dependent on data from labs that perform the COVID-19 tests but inconsistency in what information labs send to the sate has led to questions about how many tests have come back negative.

Further down you'll see other labs with positivity rates of 14%, 3%,10%, and so on, but you'll spot a few with 100% positivity rates. One lab, for example, reported 464 test positive test results and no negatives.

In the Bay Area, James A. Haley Veterans Micro Lab reported 96 positives out of 96. Morton Plant Hospital showed 35 out of 35. Tampa General Hospital Clinical Lab reported 25 out of 25. St. Anthony's had 22 out of 22

It is important to note that, in some cases, multiple labs report from some hospitals, including TGH. Another lab within the hospital, its largest lab, reports a 6% positivity rate from 32,717 tests. 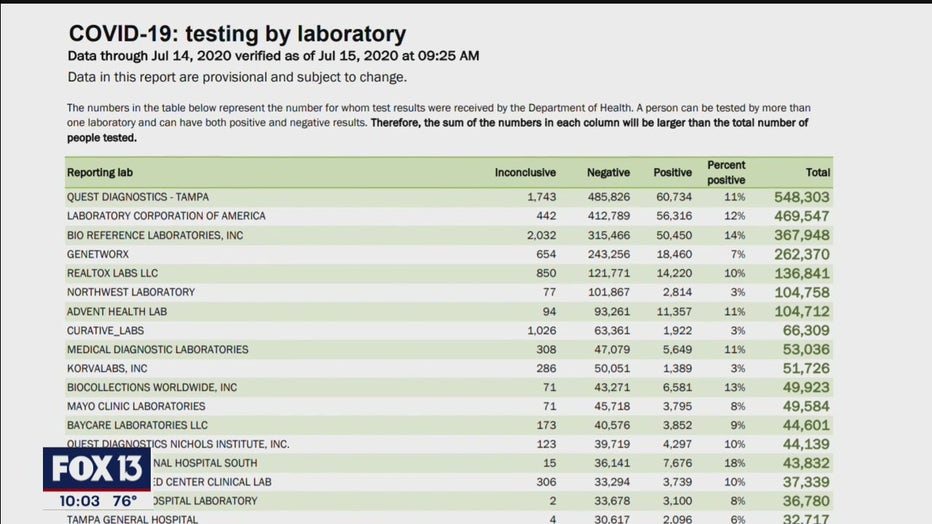 So, why are some labs only reporting positives?

The DOH told FOX 13 in a statement, "All COVID-19 cases are confirmed through diagnostic and antigen testing and then reported to the state by the labs performing the testing. Private and public laboratories are required to report positive and negative test results to the state immediately. In recent days, the Florida Department of Health noticed that some smaller, private labs weren’t reporting negative test result data to the state. The Department immediately began working with those labs to ensure that all results were being reported in order to provide comprehensive and transparent data. As the state continues to receive results from various labs, the Department will continue educating these labs on proper protocol for reporting COVID-19 test results."

USF's Dr. Charles Lockwood said he told the governor in April, when 10,000 people were being tested for COVID-19 daily, that Florida needed to test 30,000 people a day. Now, the state is near 150,000 a day, but getting the results back is the major problem.

It's the norm and the law that if someone tests positive for certain infectious illnesses, it's reported to the state. In a pandemic, it's the rule that negatives are reported, too. All of those numbers factor into the state's percent positivity, which is also supposed to determine what stays open and what closes down.

DeSantis addressed the issue Wednesday, saying, "There were a number of labs who were just simply doing what the default is, which is sending the positives only without sending the negatives. So, I don't think they were trying to be underhanded, those labs. I think that's kind of what they were doing before this started."

"So, that was identified," DeSantis continued. "I think they are going to start doing the negatives as well."

AdventHealth's Centra Care also showed a positivity rate of 100% on the state report. However, they responded that, “the state’s direction to Centra Care was to only report positive cases, so that’s what they are doing. You would have to ask the state why they would assign a percentage without having the total.”

Inside a COVID-19 testing site

FOX 13's Jennifer Holton spent a day at a testing site to see what the volunteers face as they battle the elements while trying to stay safe.

"That number is not correct. I’m not sure where it came from," said Dr. George Ralls, vice president of quality and clinical transformation at Orlando Health. "I’m still trying to track down how that information was communicated to the DOH.”

The hospital system says its percent positivity is actually 9.7%.

"When a 98% rate of positives comes in from a particular lab or particular location, the computer system should be programmed - and I'm sure it will be now - to say, 'Time out. What's happening here?' before it's reported," said USF Health's Dr. Jay Wolfson.

Wolfson said it's crucial that this data is published daily and that it's accurate to achieve full transparency.

"Trust is such an important thing," he said.

But he urges everyone to remember that it's been a learning process, not only on how to better treat the virus, but how to better manage it, too.

"The positives are positive. When we do testing, we don't create positives. We simply measure them," Wolfson said. "But for purposes of controlling this epidemic, we also have to know what the negatives are so we can keep track of what's happening in the community."

FOX 13 News asked the DOH about AdventHealth's claim that its Centra Care lab was directed to only report positives, but has not yet gotten a response. We also reached out to other hospitals mentioned in the report. James A. Haley's public affairs specialist Shayna Rodriguez responded and said they are looking into it.

As of Wednesday, the labs reporting only positive tests account for 5,730 tests. That's less than 0.1% of the tests counted by the state.