Ghislaine Maxwell, former Jeffrey Epstein associate, was found guilty of five of six sex trafficking counts. Her family says they will release a statement later in the evening.

NEW YORK - Family members of Ghislaine Maxwell expressed their belief in her innocence after the British socialite was found guilty of luring teenage girls to be sexually abused by American financier Jeffrey Epstein.

Maxwell, 59, was convicted of five of six counts late Wednesday by a New York federal jury after five full days of deliberation. Each charge carries a maximum prison term of five to 40 years.

The Maxwell family issued a statement after the jury’s verdict was read, saying it would support her efforts to appeal the conviction.

"We believe firmly in our sister’s innocence. We are very disappointed with the verdict,’’ the statement read. "We have already started the appeal tonight, and we believe that she will ultimately be vindicated." 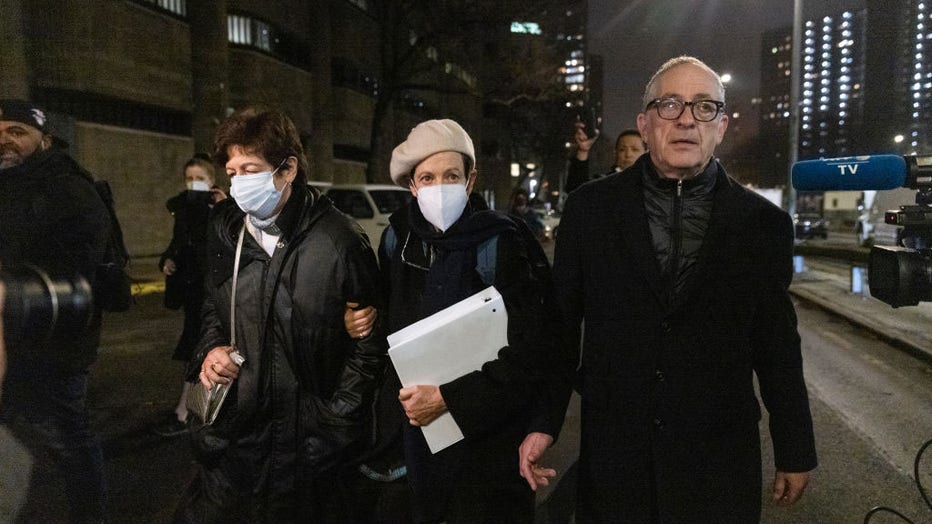 The jury's verdict ended a month-long trial featuring accounts of the sexual exploitation of girls as young as 14. Four women testified that they were abused as teenagers in the 1990s and early 2000s at Epstein’s homes in Florida, New York and New Mexico.

One of the women who testified anonymously as "Jane" said she was 14 when she met Maxwell and Epstein, and alleged that the pair fondled her together. Another woman, identified as "Carolyn," testified about what prosecutors called "a pyramid of abuse" encouraged by Maxwell, in which girls would recruit underage victims for Epstein to abuse.

Maxwell was the longtime companion and employee of Epstein, who died by suicide in August of 2019 in a Manhattan jail cell after his arrest on charges of sexually abusing dozens of underage girls. Epstein had been charged in federal court in Manhattan for the alleged crimes in New York and Florida in the early 2000s.

Maxwell had been held without bail since her July 2020 arrest.

During the trial, prosecutors called 24 witnesses to give jurors a picture of life inside Epstein’s homes — a subject of public fascination and speculation ever since his 2006 arrest in Florida in a child sex case.

A housekeeper testified he was expected to be "blind, deaf and dumb" about the private lives of Epstein, a financier who cultivated friendships with influential politicians and business tycoons, and Maxwell, who had led a jet-setting lifestyle as the favorite child of a media mogul.

A former pilot for Jeffrey Epstein testified Tuesday that he never saw evidence of sexual activity on planes he flew for his boss and his guests including multiple flights with Donald Trump and Bill Clinton.

As the verdict was read, Maxwell was largely stoic behind a black mask. Afterward, she could be seen pouring herself water as one of her attorneys patted her back. She stood with her hands folded as the jury filed out and glanced at her siblings — faithfully in attendance each day of the trial — as she herself was led from the courtroom.

With the maximum prison terms for each charge ranging from five to 40 years in prison, Maxwell faces the likelihood of years behind bars — an outcome long sought by women who spent years fighting in civil courts to hold her accountable for her role in recruiting and grooming Epstein’s teenage victims.

She did not hug her lawyers on the way out, a marked change from previous days during which Maxwell and her team were often physically affectionate with one another.

One of her victims who also testified, Annie Farmer, chose to use her real name after being vocal about her allegations in recent years. She said she was grateful the jury recognized Maxwell’s "pattern of predatory behavior."

"She has caused hurt to many more women than the few of us who had the chance to testify in the courtroom," Farmer said in a prepared statement. "I hope that this verdict brings solace to all who need it and demonstrates that no one is above the law. Even those with great power and privilege will be held accountable when they sexually abuse and exploit the young."

Socialite Ghislaine Maxwell, friend of financier Jeffrey Epstein, has been found guilty on five out of six counts in her federal sex trafficking trial. Maxwell faces up to 40 years in prison after being convicted on charges including sex trafficking and conspiracy to entice a minor.

U.S. Attorney Damian Williams praised the victims who testified against Maxwell after experiencing what he called "one of the worst crimes imaginable."

"I want to commend the bravery of the girls – now grown women – who stepped out of the shadows and into the courtroom. Their courage and willingness to face their abuser made this case, and today’s result, possible," he said in a statement.

No sentencing date was set.