Senate Bill 524 was signed by the governor at Rookies Sports Bar & Grill in Spring Hill in front of a large crowd of supporters. The newly signed bill will require voter rolls be reviewed annually and updated, strengthening ID requirements, establishing the Office of Election Crimes and Security, and increasing penalties for election law violations.

"I think this office will be very much appreciated, and it will allow us to have people who really specialize in election security and election integrity," Governor DeSantis said during the new conference held in Spring Hill.

The law will increase the penalty for ballot harvesting to a third-degree felony in Florida, punishable by up to five years in prison, a $5,000 fine, and up to five years probation, according to Governor DeSantis. Previously, the penalty was a first-degree misdemeanor, the governor's office confirmed. 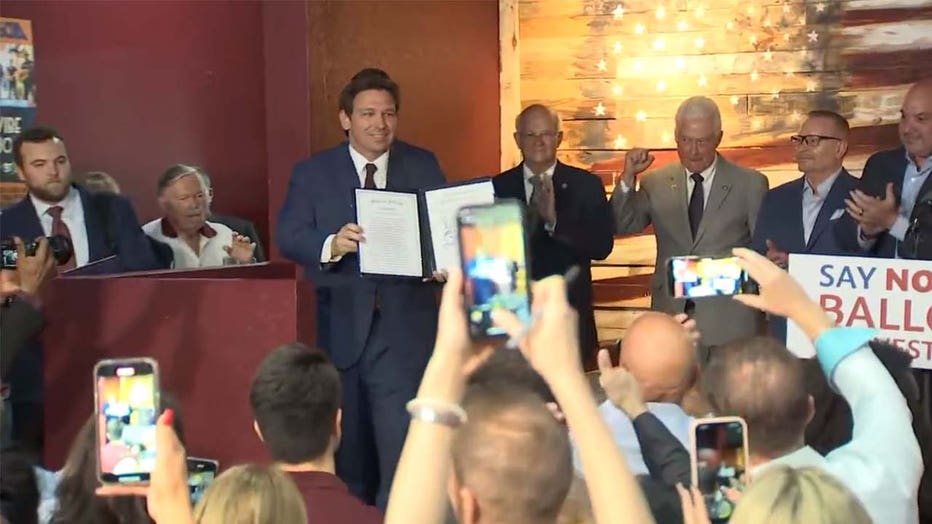 The Office of Election Crimes and Security will be established within the Department of State, according to the governor's office. The Florida Department of Law Enforcement received positions and resources in this year's budget to support election-related criminal investigations with the new police force, the governor said.

The bill requires voter list maintenance be conducted on a yearly basis by supervisors of elections to combat possibilities of voter fraud, DeSantis said. It will also require the Department of State recommend plans on strengthening ID requirements for mail-in ballots.

"We need to do more to ensure our elections remain secure," the governor said. "We have ended ballot harvesting, stopped drop boxes and the mass mailing of ballots, and banned Zuckerbucks, and this bill will give us more resources to make sure bad actors are held accountable."

A federal judge in Tallahassee ruled some of last year’s election provisions are unconstitutional and the state should be barred from asking for similar changes without the approval of the federal government. Judge Mark Walker said the laws "Attack the voting rights of Blacks in Florida."

However, Governor DeSantis predicted Monday that higher courts will uphold the new laws.