TAMPA, Fla. - For the first time since Hillsborough County Sheriff's Office Deputy Brian Lavigne was killed in the line of duty, the sheriff's office is honoring all their heroes.

His plaque is now the seventeenth added to HCSO's memorial wall, unveiled during a 35-minute annual ceremony tonight held in honor of all HCSO deputies who have died in the line of duty.

"I hoped and prayed my duties as sheriff would never have cause to present a widow or grieving family with a flag to honor their fallen loved one," said Sheriff Chad Chronister, fighting back tears. 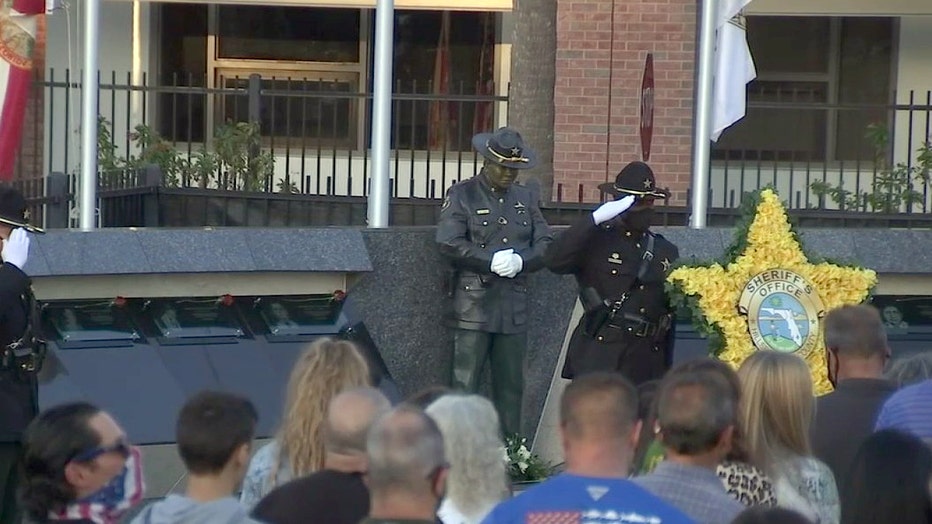 LaVigne died January 11 when the driver's side of his car was hit by a fleeing suspect.

"He was a shift away from retirement," said Chronister afterward. "The plans they had were grandeur. He went into the DROP program to get a certain amount of money so they could travel the world."

His family was there, but too emotional to speak.

‘He was my role model’: Daughter of fallen deputy remembers father killed 1 shift away from retirement

Corporal’s daughter reflects on why she became a deputy

Deputy John Kotfila was killed in 2016, also in a crash.

His sister, Katelyn, who became a deputy in his honor, says the practice of honoring each deputy who was killed is a difficult, but necessary part of dealing with grief.

"You live losing him all over again. It's hard to go through that every time," she said to reporters beforehand. "I know it means a lot to my family, especially my mom. She does not ever want anybody to forget him."

Katelyn wasn't planning to be a cop until she was inspired by the brother she was so close to.&nbsp; John Kotfila Jr. was a Hillsborough deputy sheriff who gave his life.

The 40-minute ceremony made sure of that, and is a reminder that all those who wear the badge every day, also risk their safety.

"Those engraved on the memorial behind me were a son, a husband, a father, and a friend," said the sheriff.

Just this year, two other members of law enforcement have been killed in the line of duty just in Tampa Bay.

Statewide, 12 have been killed, compared to four in the same time period last year.

Mourners lined the streets to pay their final respects to Corporal Brian LaVigne, the fallen Hillsborough sheriff's deputy who was killed in the line of duty last week.