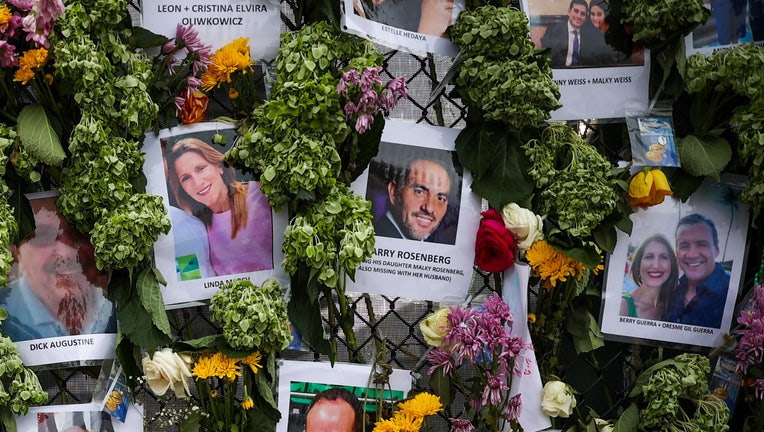 A missing poster of Harry Rosenberg hangs on a fence as part of a makeshift memorial in Surfside, Florida on June 29, 2021. His daughter, Malky Weiss, and her husband, Benny Weiss, pictured in the upper right corner, had just arrived for a visit and

SURFSIDE, Fla. - On a recent morning before communal prayers at a synagogue, Harry Rosenberg told a friend that his new beachfront condo in Florida offered a much-needed change of scenery after an awful year in which he lost his wife to cancer and both parents to COVID-19 in New York.

The home in Surfside was to be a gathering spot for visiting children and grandchildren, and his daughter and son-in-law were doing just that when they traveled to the condo last week from New Jersey to join him for the Sabbath.

Hours later, the building collapsed, and all three family members are missing in the rubble.

Their cascading tragedies — cancer, COVID-19 and now the flattening of the building — are reminders of the excruciating toll the collapse has taken on families after what was already a grief-filled year.

Elsewhere in the building, a woman also sought a fresh start in Florida after falling ill and recovering from COVID-19. Another man was visiting Florida to attend the funeral of an old friend who died after being infected, and a Colombian family was in Miami to get the vaccine.

"He told me, ‘It is the next chapter of my life.’ He went through hell. His parents passed away. His wife passed away," said Steve Eisenberg, who saw the 52-year-old asset manager last week at the synagogue.

One of the Bay Area's top search and rescue teams has deployed to South Florida to help with the deadly condo collapse.

Rosenberg "came to Florida to breathe a little bit,¨ said Rabbi Sholom D. Lipskar, founder of the Shul of Bal Harbour, the synagogue he joined.

When the building tumbled to the ground, Rosenberg's daughter, Malky Weisz, 27, and her husband, Benny Weisz, 32, had just arrived for their visit on the second floor of Champlain Towers South. So far, 12 bodies have been recovered. Almost 150 people are still unaccounted for.

Described as a family man and observant Jew, Rosenberg had launched a young adult center for mental healing at a hospital in Israel in memory of his late wife, Anna Rosenberg.

Before his wife died last summer of a brain tumor, he spent three years taking care of her, a close friend said.

"He put his life on hold," said Maurice Wachsmann, a friend of Rosenberg's for more than 30 years.

Months after her death came more heartache. His father died of COVID-19 in January, and weeks later his mother died of the same.

"It was extremely difficult," Wachsmann said. "He did everything for his parents. Family first, before everything."

Last week, Rosenberg traveled to New York for the baby-naming ceremony of his second grandchild and rushed back to Miami to prepare for his daughter and son-in-law's visit. She works as an auditor at a branch of the Roth & Co accounting firm in Farmington, New Jersey. Her Austrian-born husband works in finance.

In his short time in Florida, he was already known by people in the community. Fellow members of the synagogue and his family are now anxiously awaiting any news from the scene. In the pile of rubble, family and friends have spotted one remnant of his life at Surfside from afar: a white couch.