LAKELAND, Fla. - More details have been released about five Floridians charged in connection with the January 6 U.S. Capitol riot, several of whom allegedly beat officers with flagpoles and riot shields while shouting, "We didn’t come all this way just to stand here!"

The federal indictment outlines a detailed timeline of the group’s alleged two-hour attack on law enforcement around the Capitol building and in the structure’s tunnels, supported by annotated photos showing them grappling with officers. 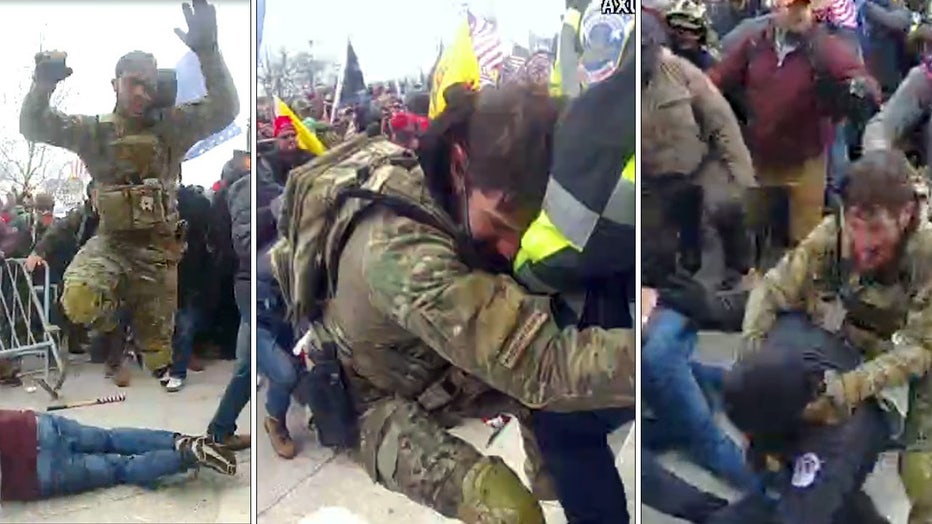 Images in the indictment allegedly show Jonathan Pollock of Lakeland leaping over rioters to attack officers, grabbing one around the neck. The FBI says he's still at large. 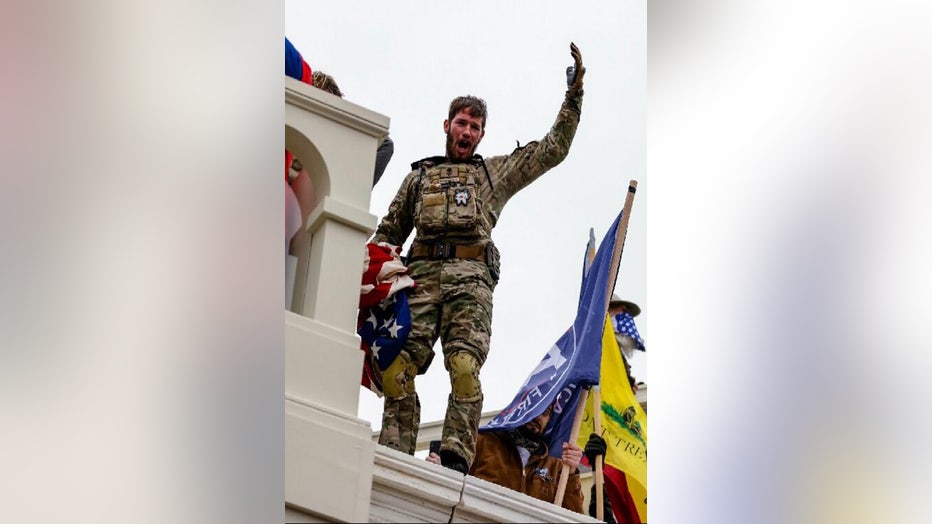 The man identified as Pollock in the indictment.

According to the indictment, a former co-worker of Jonathan Pollock told investigators that Pollack had taken "several weeks off" to go to Washington with family, then returned with photos from the riot and bragged to his coworkers about "having been on the news."

The next day he left his job, citing a family emergency, and his co-workers never saw him again. 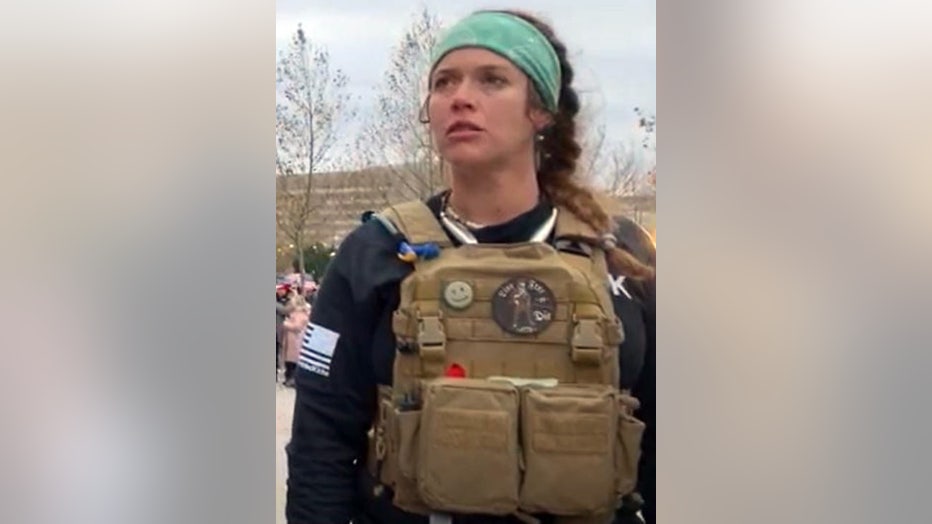 The woman identified as Pollock in the indictment.

In addition to social media images, the rest of the group was identified in part based on tips from other witnesses, including two local members of law enforcement who were familiar with the Pollock family and their Lakeland gun shop.

Agents also watched Michael Perkins’ Lakeland home to match him with surveillance images from the riot, and they say cell phone records show Olivia Michele Pollock – Jonathan's sister – was in or around the Capitol during the riot. 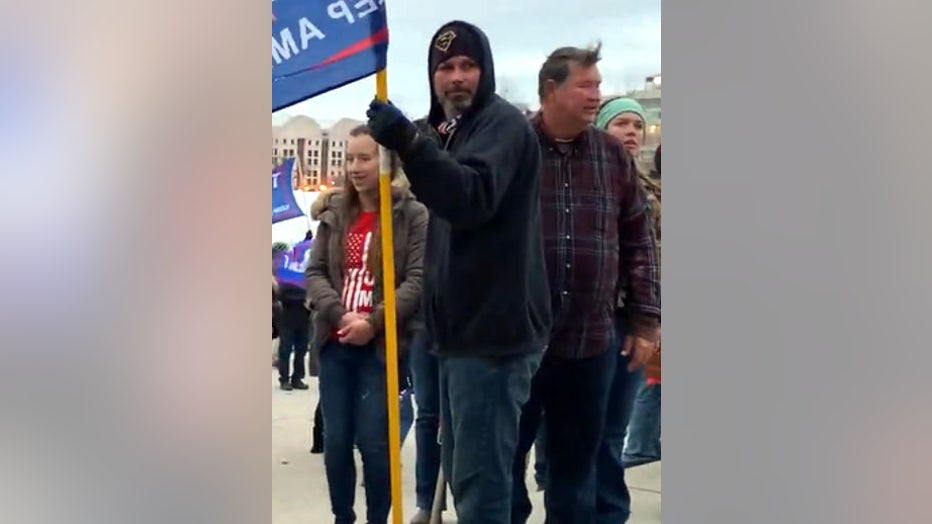 The man identified as Perkins in the indictment.

Photos in the indictment show a man, identified as Jonathan Pollock, dressed head-to-toe in camouflage tactical gear. Agents say he charged at officers with a flagpole, then knocked over a metal gate and tackled an officer, kneeing one near the face before punching another officer in the face and holding him on the ground "in a choking action."

Meanwhile, Perkins allegedly struck another officer in the back of the head with a flagpole while Olivia Pollock tried repeatedly to grab a baton from an officer’s hands. 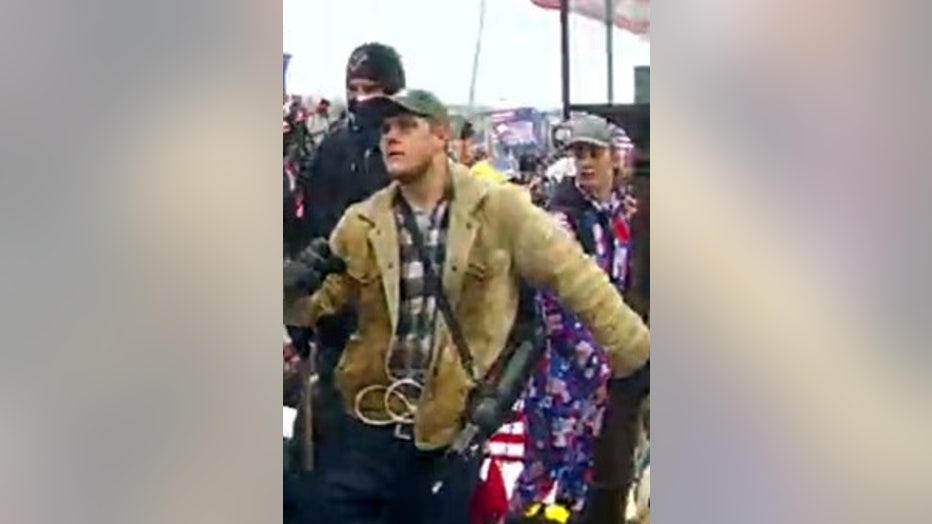 The man identified as Doolin in the indictment.

Agents say Doolin was spotted at that time with zip-tie handcuffs tucked into his belt and a riot-control chemical spray can, which appears to belong to law enforcement, slung over his shoulder.

After tussling with officers, Jonathan Pollock and Doolin began screaming, the indictment says, shouting, "We didn’t come all this way just to stand here!" and "We didn’t come this far just to push back the cops." 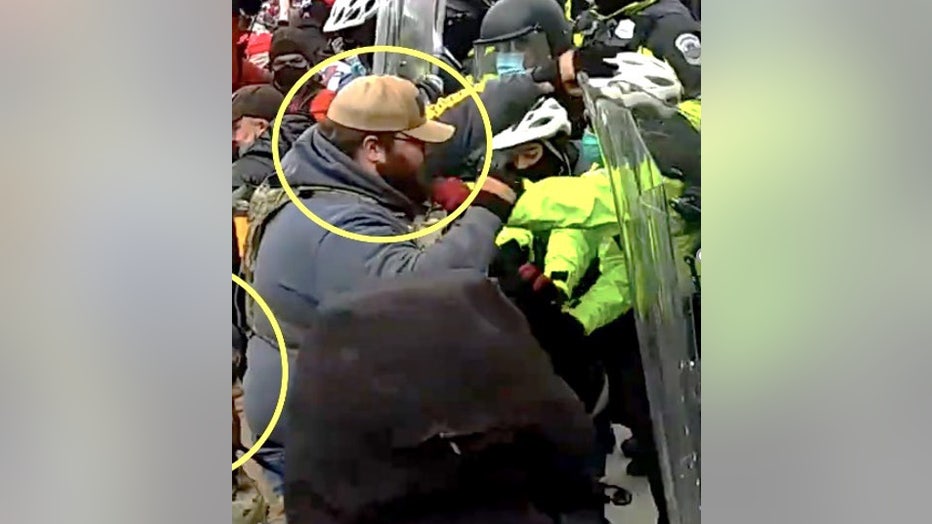 The man identified as Hutchison in the indictment.

After that, the indictment says Pollock encountered officers at the Capitol tunnel, where he slammed a riot shield into the line, jamming their own shields and "preventing them from defending against the attacks" while he and others blocked their movement.

All five suspects face several charges, including assault on law enforcement, violent entry and disorderly conduct, and theft of government property. All have been arraigned in court except for Jonathan Pollock, who remains at large. 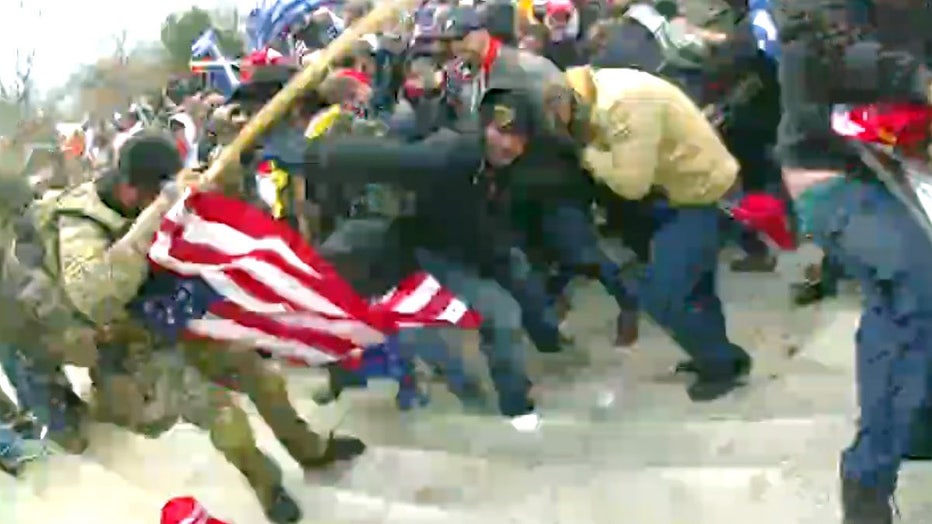 The FBI says this images shows Doolin, Perkins, and Pollock engaging with officers.

More than 500 people have been arrested in the six months since the riot. The U.S. Capitol Police say the majority of threats come from California and Florida and that’s why it is opening two field offices – one in Tampa and one in San Francisco.