Swans rounded up for yearly exams

LAKELAND, Fla. - Tuesday was the day the Lakeland Parks and Recreation Department looks forward to all year: The annual Swan Roundup. It’s a sight to behold as johnboats race across the lake trying to keep up with the swans.

Steve Platt, known as “The Swan Father,” says the process is not as hard on the swans as it appears.

“It’s really not as stressful as it looks on them. We’re pretty quick and it usually takes a couple of hours and we’re done.”

To catch the swans, Platt hangs off the front of a johnboat with a large net and the driver gets the boat right next to the birds. That’s when Platt nabs them with the net.\ 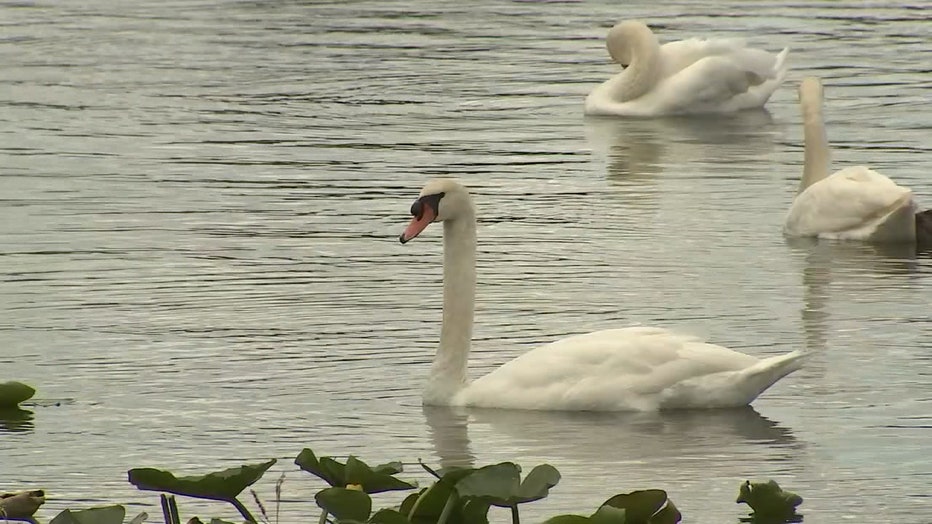 “It’s really all up to the driver. He can see around me enough to keep them all pushed to our right-hand side and at that point the birds like to duck and dive.  We’re on it, it’s just a matter of getting them tired enough where we can put them in the net,” explained Platt.

After the swans are captured, they are placed in a holding pen overnight to settle them down after the stress.

“Every year we catch them up one day, and the next day, examine them. We’re making sure that they are all at a good weight, that they are not carrying any excess parasites, and that there aren’t any that are having to live with painful injuries,” said Dr. Price Dickenson with My Pet’s Animal Hospital.

Dickenson is volunteering her time to help these birds because they are such an important part of Lakeland.

Kevin Cook, the city’s director of Communications, says feeding the swans is almost like a rite of passage for residents. Because these birds are domesticated, they must get their annual checkups. So every year people come out and watch the annual Swan Roundup.

You could own a famed Lakeland swan

The swans of Lakeland are known around the world, but a population boom means the city needs to find new homes for some of the birds.

This year there are so many swans swimming the lake, the city will hold a swan sale later this month. The swans will cost $400 each and there will be a limit of four per purchase.