TAMPA, Fla. - A manatee and her calf are recovering in ZooTampa’s critical care center after a boat strike that left the mother with a collapsed lung.

"The mom was injured by a watercraft. She does have several previous boat strike injuries, but she was brought in due to her floating on top of the water column," said ZooTampa manatee and Florida wildlife care supervisor Jaime Vaccaro.

Earlier this month, neighbors along the Hillsborough River spotted a manatee that appeared to be struggling with buoyancy issues and unable to dive.

"Buoyancy is really important for them and when they cannot submerge under the water column to get food that really can affect their overall health. It not only can affect their eating, but they can also be suffering from internal damage that could lead to infections," explained Vaccaro. 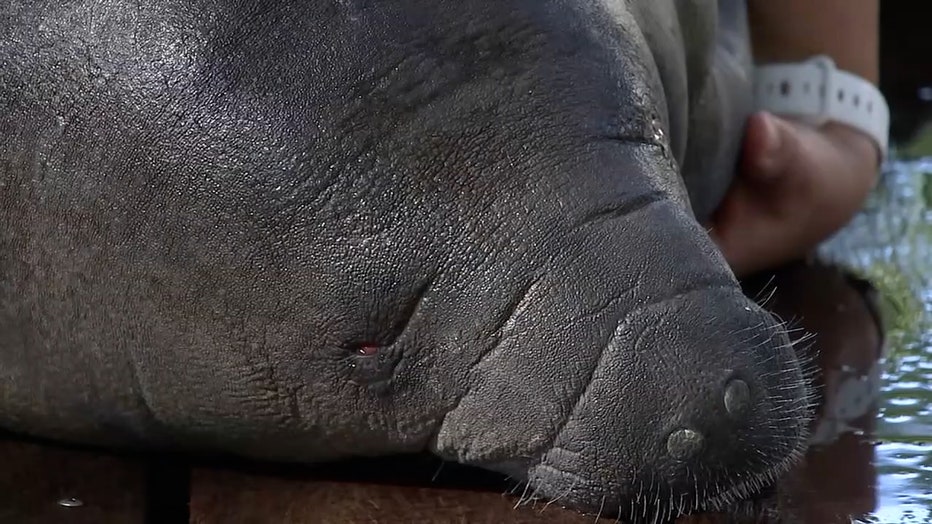 Manatee mom who had a lung collapse after being struck by a boat is recovering at ZooTampa with her calf.

The mom is a previously tagged 1,600-pound manatee named Juvea. She was rescued along with her 6-month-old calf. They’re now among 17 injured manatees receiving treatment in ZooTampa’s manatee critical care center. Nearly half of the critical care patients are suffering from boat strike injuries.

"They were hit by boats most likely going at a higher rate of speed and that, in turn, either fractured or broke their ribs, which punctured their lung, so they, unfortunately, have a collapsed lung and that causes air to move to the chest cavity. It causes them to kind of float like a balloon on top of the water," said Vaccaro.

Juvea is currently unable to eat on her own, so zoo staff members are using a feeding tube to ensure she gets the nutrients and electrolyte fluids she needs to heal.

Despite all that’s happened to her, she’s still able to produce milk for her calf.

When a golden retriever paddled a little too close to a herd of manatees in the waters off Alabama's Gulf Coast, the startled sea cows erupted into a splashing frenzy around the pup — prompting the dog to immediately make a beeline back for the beach.

READ: ‘Oh my gosh!’: Curious golden retriever in Alabama spooks manatees — and herself

"Her calf is doing wonderful. Manatee moms are great moms, and it’s amazing to see how sometimes we get some moms that are in really rough shape, but they manage to keep their calves healthy," said Vaccaro. "They really give their all for their calves, and they’re a resilient species. So, her calf has been nursing pretty frequently."

Manatee calves typically stay with their moms through their first 18 months of life. ZooTampa staff are helping to raise several orphaned calves. It’s unclear what happened to their moms, but the calves will need to be bottle-fed and will remain at the zoo until they’re old enough to be released on their own. 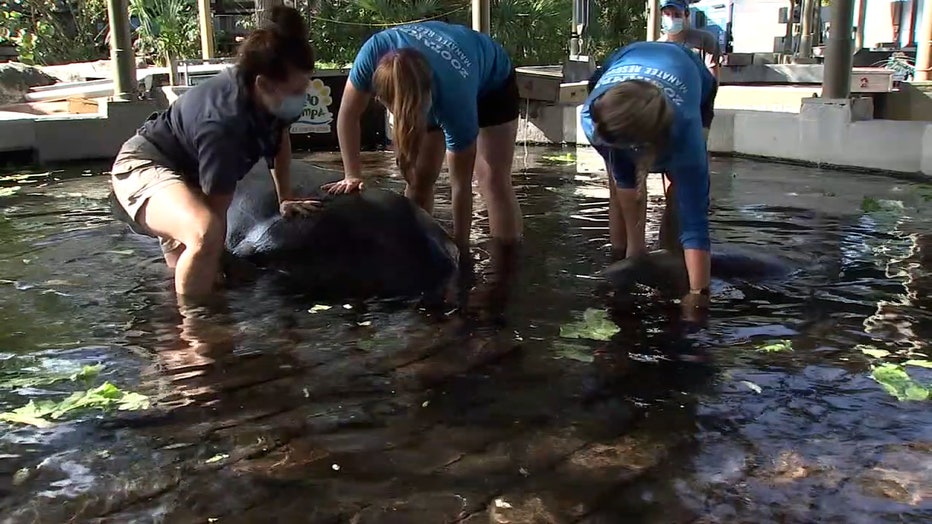 Manatee mom and her calf at ZooTampa

Juvea and her calf will stay together at ZooTampa until she’s well enough for their release. Vaccaro explained the typical recovery time from a boat strike injury is about six months.

"We are hoping everything goes well for Juvea. We’re just going to give it time to see if that air can kind of dissipate out of her chest cavity. Sometimes it works itself out on its own, but a lot of times it needs intervention by our vet team to do a chest tap," said Vaccaro.

The pair offers a good reminder to boaters to slow down and obey posted speed signs.

"If you see a no wake zone, those are going to be areas where manatees are known to frequent, so just slow down. Wear polarized glasses if you can, that’ll help you to be able to see them better in the water," said Vacarro.

Boaters should look out for a circular pattern created when manatees propel through water with their tail. Their backs and nostrils can also be seen just above the water plain when they surface. Having a navigator to look out for wildlife is a good idea.

Manatees are also incredibly curious and often explore objects using their flippers and prehensile lip – much like their relative, the elephant, uses its trunk. Cleaning up trash and fishing debris helps keep manatees safe.

"We often see things like discarded fishing line wrapped around their flippers or crab trap ropes around them. Entanglements are definitely prevalent here among the manatees that come into our critical care center," said Vacarro.

Injured manatees can continue to travel great distances, so it’s important to report sightings to the FWC immediately. If you see a manatee that’s floating above the water surface, on its side, entangled, or has an open wound, call FWC's hotline at 1-888-404-FWCC.