A pool party in the Ozarks drew a large crowd over Memorial Day weekend during a time of social distancing. Video credit:&nbsp;@breelove17 via Storyful

O’FALLON, Mo. - Missouri’s health director issued a dire warning Monday after photos and video showed Memorial Day weekend revelers partying close together: The coronavirus is still here, and the spreading of illnesses could have “long-lasting and tragic” results.

According to FOX 2, the state's health officials are urging anyone who traveled to Lake of the Ozarks over the weekend and ignored health recommendations to self-quarantine for 14 days, or until they test negative for COVID-19.

One video on social media showed a crammed pool at Lake of the Ozarks, with people lounging and playing close together, without masks. The lake draws people not only from as far away as Arkansas and Iowa.

It’s an especially popular spot for travelers from St. Louis city and county, which combined account for more than half of Missouri’s 12,167 confirmed cases of COVID-19, the illness caused by the virus, and more than two-thirds of the state’s 685 deaths.

“The risk of contracting COVID- 19 is exponentially increased,” Page said. “This reckless behavior endangers countless people and risks setting us back substantially from the progress we have made in slowing the spread of COVID-19. I encourage everyone to follow the Department of Public Health advisory to determine a safe path forward in the workplace.”

Bars, restaurants and hotels at Lake of the Ozarks also had big crowds, and they weren’t alone. In Hannibal, Mark Twain’s hometown and a popular regional tourist attraction, people could be seen sitting shoulder-to-shoulder inside and out at downtown bars and restaurants over the weekend.

Republican Gov. Mike Parson allowed Missouri businesses and attractions to reopen May 4, but the state order requires 6-foot social distancing through at least the end of May. The order leaves it up to local and state health officials to enforce social distancing.
The sheriff of Camden County, the area of the lake that attracts the most visitors, said in a statement that there is no crime related to social distancing “and therefore the sheriff’s office has no authority to enforce actions in that regard.”

“We expect residents and visitors alike to exhibit personal responsibility when at the lake,” Sheriff Tony Helms said. “We also respect the right of citizens to move freely around the lake and take responsibility to protect themselves from any expected dangers related to COVID-19.”

But the images clearly caught the eye of other public officials. 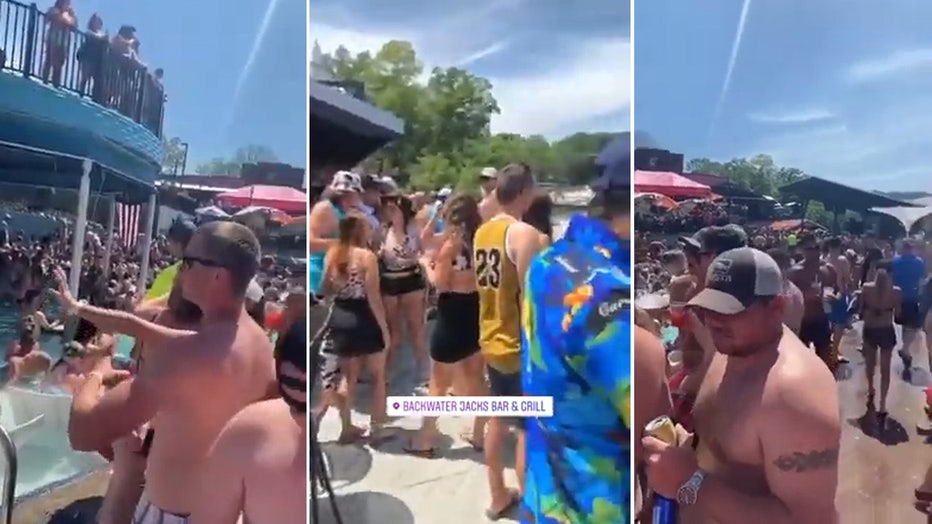 “This Memorial Day, we caution that COVID-19 is still here, and social distancing needs to continue to prevent further spread of infections,” Missouri Department of Health and Senior Services Director Randall Williams said in a statement.

Video from the Lake of the Ozarks typically showed younger people. Williams said close contact, even in the outdoors, can lead to more infections, even among the young and healthy who may not experience symptoms.

“When they then carry the virus and transmit it to a more vulnerable person, this is when we tend to see the long-lasting and tragic impact of these decisions that are being made,” Williams said.

St. Louis Mayor Lyda Krewson, in a statement, called it “irresponsible and dangerous” to engage in such high-risk behavior.

“Now, these folks will be coming home to St. Louis and counties all over Missouri and the Midwest, raising concerns about the potential of more positive cases, hospitalizations, and tragically, deaths,” Krewson said in a statement. “It’s just deeply disturbing.”

St. Louis Health Department spokesman Harold Bailey said officials are “greatly concerned” that city residents will return from large gatherings and bring the virus back with them.

“That could negate, or even set back the mitigation efforts we have accomplished up to this point in the pandemic,” Bailey said in an email.

For most people, the new coronavirus causes mild or moderate symptoms, such as fever and cough that clear up in two to three weeks. For some, especially older adults and people with existing health problems, it can cause more severe illness, including pneumonia, and death.

St. Louis officials said private commercial labs are experiencing delays in processing coronavirus tests. A news release from the city health department did not name the labs with delays or specify the lag.

Dr. Fredrick Echols, the city’s health director, said the delays mean longer wait times for patients wanting to know if they’ve tested positive. It could also mean that data used to determine the timing of phased-in business re-starts could be skewed.

“Test results are the key to understanding how widely the virus has spread, how it is currently spreading, and its severity,” Echols said in a statement.