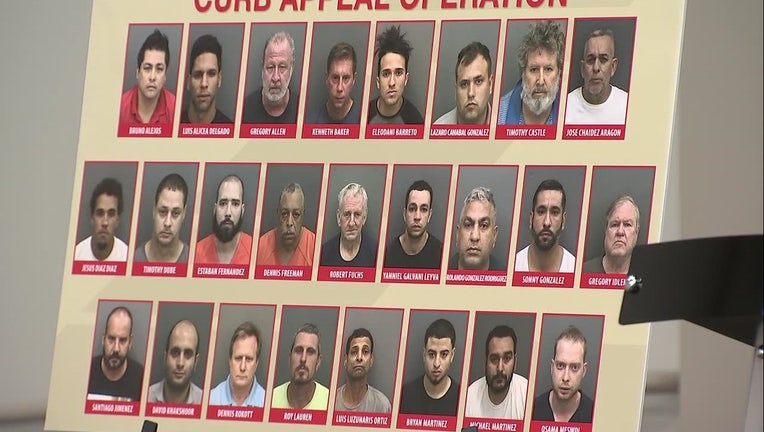 TAMPA, Fla. - Dozens of men were apparently fooled into thinking they were soliciting sex from women, but those women turned out to be deputies with the Hillsborough County Sheriff's Office, the agency announced Wednesday.

In a news release, Sheriff Chad Chronister said more than 40 men were arrested during the undercover operation.

Detectives said the purpose of the sting was to reduce the demand for human trafficking.

"Prostitution should not be viewed as a victimless crime. The person on the other end of these transactions could be someone who has been forced into human trafficking,” Sheriff Chad Chronister said. "I want to make it clear to those who want to purchase sex here in our community, you will be held accountable for your actions."

The sheriff's office said the men arrested ranged in age from 20 to 76 years old.

How to spot the signs of human trafficking

Christa Lynn Hicks, the executive director of anti-trafficking at One More Child based in Polk County, says the signs of a child being trafficked or abused might not be what you think, but there are ways everyone can help protect children, especially during the pandemic.

One of the men arrested, 37-year-old Isaac Jermaine Thomas, also faces charges of fleeing and attempting to elude an officer after he tried to take off in his vehicle as they went in to arrest him.

It's not the first time the sheriff's office targeted similar suspects. Over the summer, six men, deemed by the sheriff as "The Sinful Six," were arrested after investigators saved five trafficking victims.

Earlier this month, when detectives announced they arrested nearly two dozen men for trying to contact minors for sex, the sheriff said the agency wants to increase its awareness campaign on human trafficking, considering Super Bowl LV is still set to be held in Tampa next year.