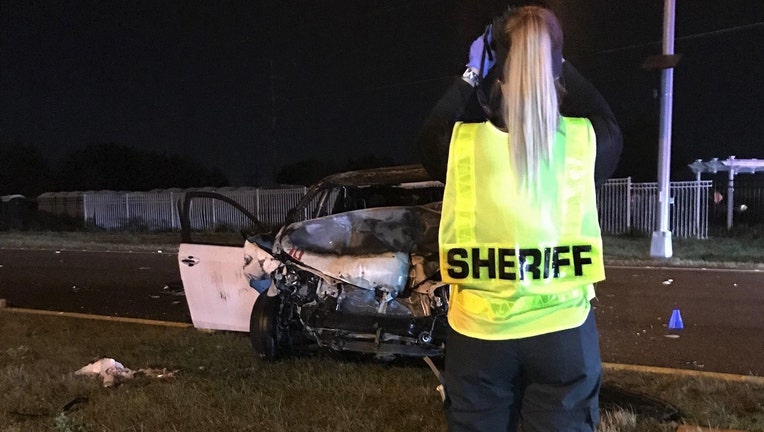 MULBERRY, Fla. - A 12-year-old boy from Plant City was killed shortly after midnight Sunday following a two-vehicle crash near Mulberry, according to the Polk County Sheriff’s Office.

It happened on State Road 60 at Coronet Road.

Deputies say Mario Martinez, 30, of Mulberry, was driving a Toyota Corolla westbound on SR 60 in the outside lane, while Andres Orozco, 42, of Wauchula, was traveling south on Coronet Road in a pickup truck pulling a trailer along with a 12-year-old and 14-year-old.

The pickup truck pulled into the intersection and into the path of the Corolla, which had the right-of-way, according to PCSO.

When deputies arrived, they found the 12-year-old boy unresponsive in the median of the highway. He was airlifted to St. Joseph Hospital in Tampa where he died of his injuries. The 14-year-old was taken to Lakeland Regional Health for a broken collar bone and was treated and released. Orozco was also taken to Lakeland Regional Health with a broken neck and broken leg and is listed in critical but stable condition.

Martinez was treated and released at Lakeland Regional Health for a broken leg. He was then arrested and taken to the Polk County Jail and charged with DUI Manslaughter, two counts of DUI crash with a serious injury, DUI, and driving without a valid license.

Deputies say no one in Orozco’s car was wearing a seatbelt, but Martinez was wearing one.

The roadway was shut down for approximately five hours while the PCSO Traffic Homicide Unit was investigating at the scene.

This crash remains under investigation.