TAMPA, Fla. - Redistricting added a new congressional district in Central Florida, and indirectly produced an open seat that serves west Polk and east Hillsborough counties. It's a Republican-leaning district with five Republicans running for the GOP nomination in the 2022 midterm primary.

As a state Senator, Kelli Stargel sponsored Florida’s new restrictions on abortion, which ban it in most cases beyond 15 weeks.

She said if elected to Congress, she would not support similar legislation on a federal level because she said it should be left to the states to decide.

FOX 13 Political Editor Craig Patrick began the interview with a closer look at Stargel’s position on the issue. 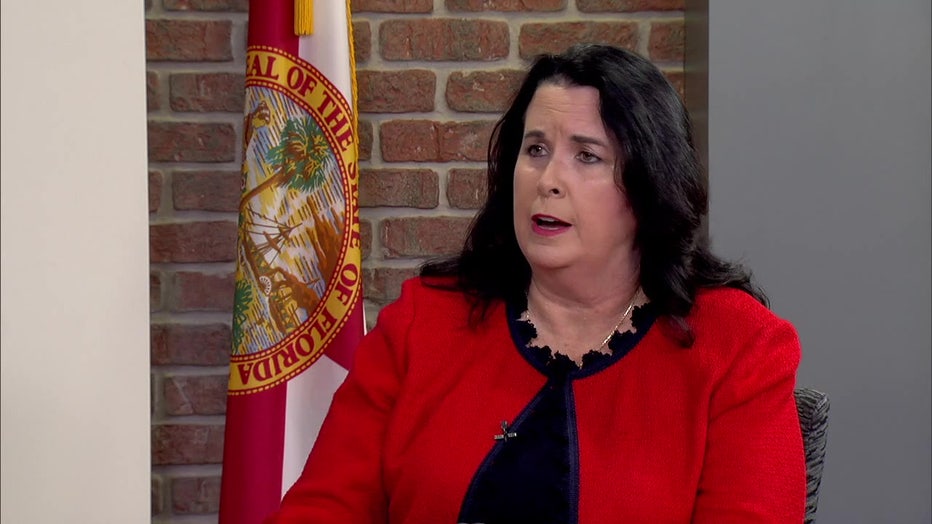 Kelli Stargel, candidate for GOP nomination for Congress, interviewed by Craig Patrick ahead of 2022 primary

Kelli Stargel: "Well, as you said in the beginning, it's at 15 weeks. So up to those 15 weeks, you have all the, we don't have any questions asked. You could have an abortion for any reason. I'm not saying that that's my personal position, but that's what that bill stated. So there was really no need to have those exceptions because you had up to 15 weeks to make that determination of what you wanted."

Craig Patrick: "A human trafficking, a victim of rape, someone who's a victim of domestic abuse could be withheld from or may not have the opportunity until 15 weeks. And there are cases, be they rare, that clinicians have said they might not even know they're pregnant till 15 weeks."

Kelli Stargel: "They know when they were raped. And they know that once you've been raped and any time you've had any kind of an unprotected sex, you're at risk of being pregnant. So that individual, the moment they’re raped, needs to start looking down that path of how they want to handle that situation."

Craig Patrick: "Abortions performed beyond 15 weeks account for a very small percentage of all those performed in Florida. It's in the vicinity of 3%. In light of the Dobbs decision, in hindsight or looking ahead, would you press for, on a federal level, a more extensive ban, say, six weeks, or zero weeks?"

Kelli Stargel: "…these decisions should be made at the state level… I don't believe the federal government needs to be involved in that issue at all."

Craig Patrick: "With respect to gun rights. The NRA lowered your grade down to a C. You have three other opponents in the race who have qualified A's. Did you reach out to the NRA and ask why and why do you think they dropped your grade?" 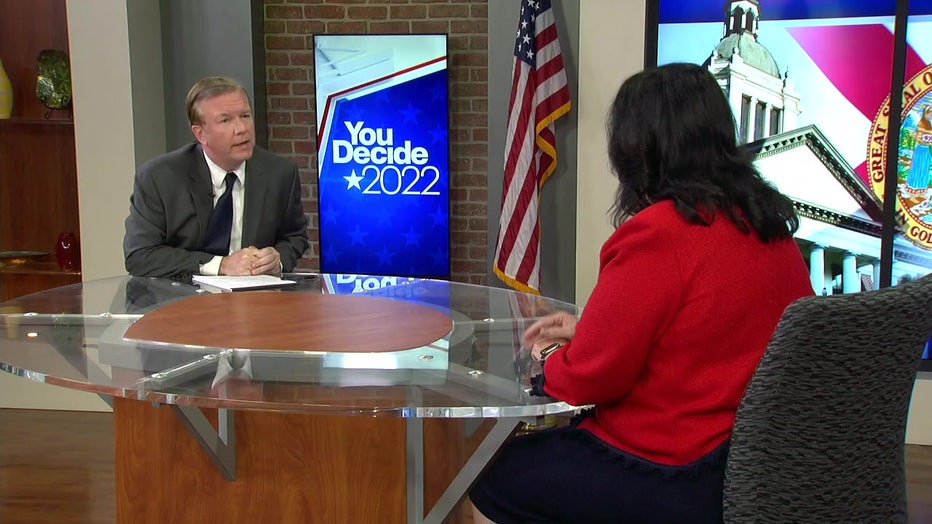 Kelli Stargel: "The individuals who have As, they completed a questionnaire. I have a long track record. In fact, several years ago when we had one of our bills and the amendments that was trying to block assault weapons. I stood and defended our right to be able to have guns. I feel like if the criminals can have these guns, law-abiding citizens should be able to have them as well. And we need to make sure we protect that. The C, I think there was gamesmanship in that, quite honestly, because I have other members that we have all gotten Bs. The same happen to one of my other opponents. So I'm not sure exactly happened with that C."

Craig Patrick: "Did you to reach out to them and say, 'Wait a minute, this isn't right.'"

Kelli Stargel: "They couldn't give an answer, as well."

Kelli Stargel: "A socialist is an individual comes in and puts on people, takes away their rights and their freedoms, and enforces something upon them that they do not agree with, from the government level. "

Kelli Stargel: "I see socialism at the national level as being more of a government overreach into the individual lives of people and families."

Craig Patrick: "In that sense, socialism can be synonymous with fascism then."

Kelli Stargel: "Probably in a lot of ways, yes.".

Craig Patrick: "By a different definition of socialism, Social Security or Medicare can be perceived as a form of socialism. President George W. Bush moved to privatize Social Security, I believe, in 2005. If you're elected to Congress, would you pick up on that?"

Kelli Stargel: "I don't think Social Security has been a longstanding policy within our state. Many feel, and I agree, that people have paid into Social Security through their working tax dollars into that program and have a hope that it's going to be there when they get ready to retire. I have questions in the way that our federal government is handling itself and the way that it's spending that. In my generation, we've done everything we can to protect ourselves and not depending on the federal government to be there. But I think it's a policy that was put into place years ago. It's long-standing. People have a comfort in that, and I would not recommend you take away Social Security." 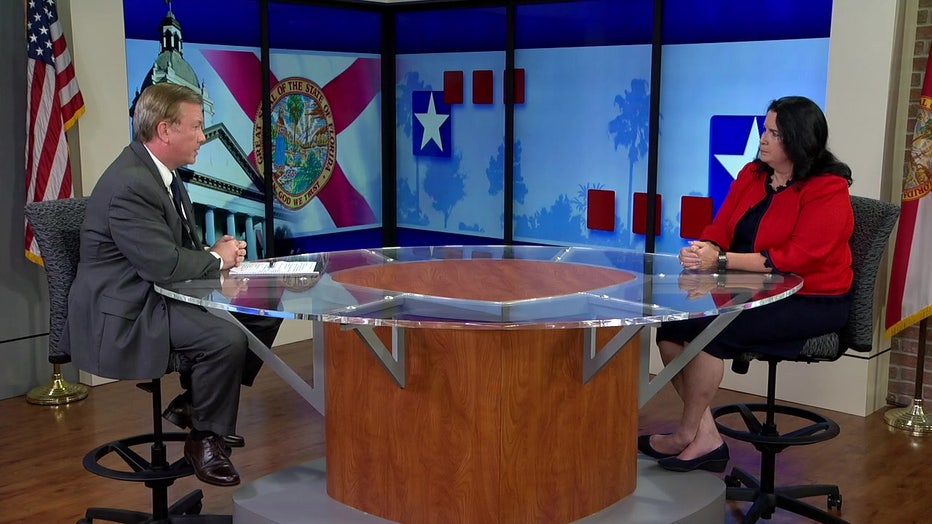 Kelli Stargel, candidate for GOP nomination for Congress, interviewed by Craig Patrick ahead of 2022 primary

Craig Patrick: "We had a problem with potential insolvency in the early 1980s. We are on a path to insolvency yet again, if something doesn't give. That would seem to be increasing payroll taxes or reducing benefits to keep it solvent. Which direction would you take it?"

Kelli Stargel: "It would absolutely be to reducing the benefits and making sure that we have the ability for reducing fraud."

Craig Patrick: "You say reduce benefits to recipients. What do you have in mind? What kind of reduction would you consider?"

Kelli Stargel: "I would have to get up there and look at it specifically what there could be. But we had a discussion a while back on Medicaid, you know, a few years ago. And, you know, like orthodontic benefits that people in Medicaid have received. And I think if you have a major mouth issue or something, orthodontics might be appropriate. But I had five children. We had to wait and one-by-one put braces on our children because we couldn't afford it. I think that's OK for government to recognize that the average working class Floridian or people in the United States is struggling, and you shouldn't have people on social services getting benefits that our working class individuals can't provide for their own children. That's a little bit of a topsy-turvy. And eventually you just run out of other people's money to pay for those programs."

Kelli Stargel: "I think it's what we should always be negotiating for the best way to provide services. I think a lot of that problem is the in-between that a lot of government hires to manage some of that."

Craig Patrick: "But in fact, Medicare should be able to negotiate the prices of certain drugs in part B and part D?"

Kelli Stargel: "To looking at how we can negotiate better prices, absolutely. They should be able to have those negotiations."

Kelli Stargel: "I think as a whole, our Florida elections have done well, but there are things that she did in her office that I do not agree with. I think we've seen results of that. I don't know. I've just recently discovered some accountabilities that were lacking and some money that was taken and then some someone who was alerting her that we had sexual offenders who were voting that were not allowed to vote according to our law, and that did nothing. So to the degree that I've seen publicly, it looked OK. But now that I'm finding out more information, I'm not so sure."

Craig Patrick: "Did the state need a forensic audit?"

Jackie Toledo is a state lawmaker, engineer and small business owner. She is branding her congressional campaign as a ‘mom on a mission’ to fight what she calls ‘woke indoctrination’ in public schools, and ‘big-government mandates.'

Kelli Stargel: "It depends on what you define a forensic audit as…"

Craig Patrick: "Should there have been more auditing of the 2020 election in Florida than there was?"

Kelli Stargel: "It depends on, I can't say globally. I don't know what rose to the level of security of questions. There were individuals who have said these things happen. I assumed if someone points out something that happened that was incorrect at a voting polling place today. We had the situation the other day when I was campaigning and a man came and said, You weren't on my ballot, but I'm a Republican. Why not? I said, I can't explain that. I don't know why not either, to investigate and see what happened. So that when you say audit, it depends on that definition. We always need to be looking at what can be happening, fraudulently making sure it's not happening, making sure that it's not widespread. I believe we've done a lot of that. Could it have been done better? As information is coming out, we're seeing that possibly it could have been done better. But as a whole, I wouldn't say our elections are in question in the state of Florida. I think the elections as a whole, for the most part, probably were well…"

Craig Patrick: "What about, across the nation, was President Biden the legitimately elected President of the United States?"

Kelli Stargel: "Unfortunately, I think, he is elected…"

Craig Patrick: "Well, it takes us back to the word legitimate. Do you think that Biden was legitimately elected president?"

Kelli Stargel: "I think he's been certified, and he is our president."