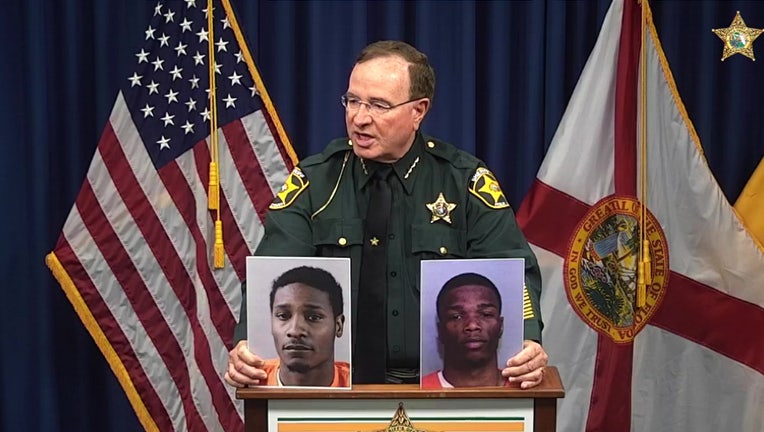 LAKELAND, Fla. - A two-year-old girl is fighting for her life after deputies say she was shot by her three-year-old brother in Lakeland just before midnight on Friday.

According to the Polk County Sheriff’s Office, three men were at Chad Berrien’s home watching a basketball game when they heard a pop. That’s when the men saw that the two-year-old had been shot and her brother ran crying from the living room.

The men grabbed both children, got in a car and headed to the hospital, but on the way, deputies said they crashed into another vehicle that turned into their path.

While investigating the crash, Lakeland police learned about the shooting and contacted the Polk County Sheriff’s Office because it occurred in unincorporated Lakeland.

Deputies began investigating around 4:30 a.m. and, using a search warrant, discovered marijuana inside the home.

Deputies say Kevonte’ Wilson told them he brought the gun inside the home and stored it between the couch cushions to keep it away from the children.

Wilson was arrested for failure to safely store a firearm, carrying a concealed firearm, possession of marijuana and possession of drug paraphernalia.

However, Polk County Sheriff Grady Judd said he will likely face more charges because legislation dictates that if a child is shot by a family member, no arrest can be made prior to seven days before the shooting. Wilson's prior criminal history includes charges of grand theft, written threats to kill, defrauding an innkeeper, and driving with no valid license.

Berrien, who had four outstanding warrants for failure to appear for battery, resisting arrest and driving with a suspended license, was also arrested for possession of marijuana over 20 grams, possession of drug paraphernalia and maintaining a house for drug use.

The three-year-old boy was taken by the Florida Department of Children and Families and placed into the care of his grandmother.

Judd stresses that the child will not face any charges.

He said, "There is absolutely no reason to think that was an intentional act, other than he was a baby playing with what he thought was some sort of toy. But, we will hold the adults appropriately liable for the conduct."

The two-year-old girl was shot one time in her upper left chest, and is currently in critical but stable condition at Lakeland Regional Health. She suffered severe injuries to her internal organs and Judd said she will be transferred to an intensive services hospital in Central Florida for additional care.

Judd said all of the adults are cooperating and added, "This just appears to be a horrible, tragic accident that never should have occurred."