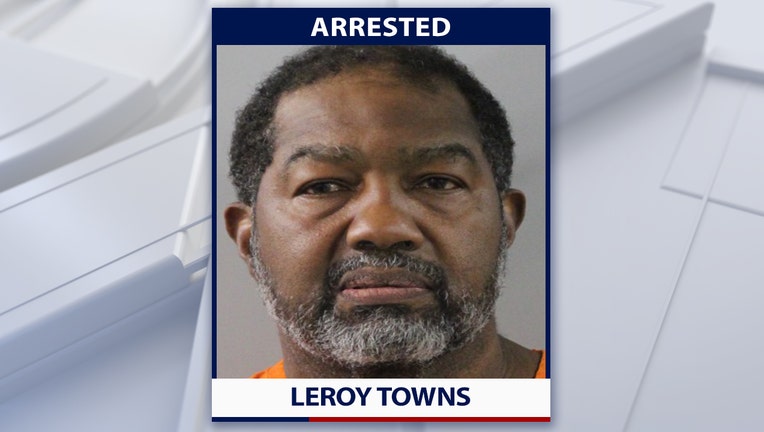 LAKE WALES, Fla. - Leroy Towns, 61, a registered sexual predator with a criminal history, was arrested Thursday afternoon after allegedly exposing himself and then crashing into a police vehicle while trying to flee from officers.

According to the Lake Wales Police Department, two people complained about a man exposing his sexual organs shortly after 3:45 p.m. in the area of 230 East Park Avenue.

Officers and detectives responding to the calls identified Towns as the suspect and located him at the Lake Wales Library on Cypress Gardens Lane, which is less than one block away from where the exposure incident occurred. However, officers say when they approached, Towns got into a gray Lincoln and attempted to flee.

An officer who was on Cypress Gardens Lane saw Towns backing the Lincoln out of a parking space at the library, accelerating quickly and jumping a curb. The officer activated his emergency lights on his marked police vehicle and tried to stop Towns. That’s when Towns, who was still driving in reverse and looking backward, angled his vehicle toward the patrol car. To avoid a collision, the officer says he drove forward, but Towns still sideswiped the patrol car and continued fleeing in reverse at a high rate of speed.

Police say Towns then struck a tree and large metal light pole, breaking it off at its base. He then drove forward across both lanes of traffic and jumped another curb. He then crashed into another tree, nearly striking a pedestrian in the area. He again accelerated but this time the tree had disabled his vehicle, allowing officers to take him into custody.

Towns has been charged with exposure of sexual organs, fleeing or attempting to elude, resisting officer without violence, aggravated assault on a law enforcement officer and leaving the scene of a crash with property damage.

Lake Wales Police Chief Chris Velasquez said, "This is another great example of officers showing restraint and using much less force than allowed to arrest a dangerous career criminal and sexual predator. This is also an example of someone who should have never been out of prison and allowed to victimize our citizens again."

Police say Towns has been arrested 16 times in Polk County since 1989. Nine of these arrests involved charges for indecent exposure.  In four of these arrests, Towns was charged with lewd/lascivious acts and in two of these, he victimized a child. He has also been charged with cruelty to animals, no driver’s license, resisting without violence, assault on a law enforcement officer, violation of probation, warrant arrest, reckless driving, and leaving the scene of a crash with property damage.

Towns has been to prison three times for a total of approximately 10 years, according to police.