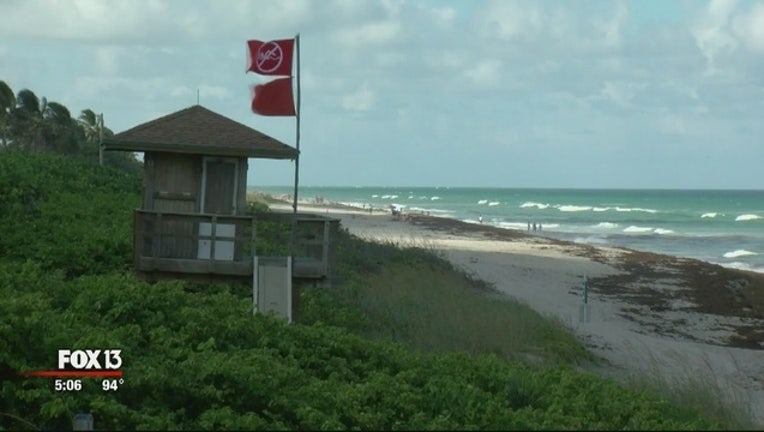 WEST PALM BEACH (FOX 13) - It didn't take long for Richard Gonzalez to notice something was wrong along his East Coast beach.  He's one of more than a dozen people who reported itchy throats and watery eyes in Martin and Palm Beach counties over the weekend.

"I took my shades off and it immediately affected by eyes,” he recalled. "I stopped here and then the police were clearing the park and the beach, warning people about the allergy and the red tide."

The FWC collected water samples to find out what's happening on the East Coast.  Late Monday, they conformed “low to medium concentrations of naturally-occurring red tide” in samples taken off the coast of Palm Beach County on Sunday.

Red tide is an algae bloom that depletes oxygen in the water. The organism is often naturally present in the Gulf of Mexico but has been especially persistent in high concentrations off Southwest Florida for the last year.  It's caused a headache for beachgoers from Venice to Clearwater, and killed marine life along the coast.

Now, scientists say, the conditions are right for it to move.

“We’ve seen this happen in the past,” explained professor Robert Weisberg with the University of South Florida’s College of Marine Science.  “It usually happens when we are in a period of retracted upwelling which means the water at the surface is moving offshore and the water along the bottom is moving towards the shore."

Weisberg explained that high concentrations of red tide cells at the beach can be transported offshore and get into the Gulf of Mexico loop current.

"Sometimes it goes as far as North Carolina,” Weisberg continued.  “Once that red tide is generated here, gets somewhere else, it can find conditions that can enable it to be sustained for a period of time."

Since the 1950's, the FWC reports, red tide has been documented on the East Coast eight times.   In 2007, a bloom was pushed to South Carolina, and the agency says in the past, red tide has been reported all the way up to Delaware.

Red tides on the East Coast are typically of shorter duration and lower concentrations than those on the Gulf Coast, though.