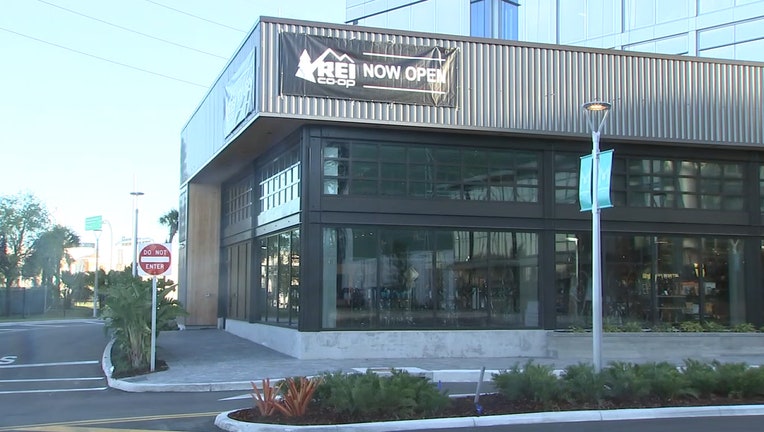 TAMPA, Fla. - The Midtown District has been in the works for a long time, but on Friday morning, the district officially welcomes its first shop as REI opened its doors to the public. REI is the first of 27 retailers to open in the Midtown District.

Midtown Tampa has been in the works for over 20 years, but now that vision is finally taking shape. Not only will this be a milestone as the first retailer to open in the district, but REI was also part of the inspiration for the district’s design. With the district’s theme focusing on health and wellness, the retailer seems to be an ideal fit.

REI occupies 23,000 square feet in the Midtown District, and with good reason. The Seattle-based company offers everything from outdoor clothing to camping gear and travel equipment. However, there will also be an educational element to the store, with group classes for those interested in learning about the outdoors.

The developer of Midtown said Shake Shack has signed a deal for 3,200 square feet at the district's main entrance. Midtown is set to open in early 2021.

Its location was also chosen specifically for REI as it is connected to multiple different walking trails and boasts a three-acre warter retention pond behind the store.

The grand vision of what the Midtown District could be is slowly inching towards completion. Over the next few months, it is scheduled to all come together. The brand-new residential building with apartments is slated to open on April 1, followed by Shake Shack coming in May and Whole Foods in June. Crews are also putting the finishing touches on the office buildings sitting above the REI location.

Behind the scenes at Whole Foods' big-time bakery

The nondescript building in a South Florida industrial park is deceiving. There is no telling from the outside that there’s a nearly non-stop feeding frenzy underway inside.