What is salmonella infection and what are the symptoms?

People can get infected by eating contaminated food or drinking water, as well as by touching infected animals or their environment.

The federal government on Monday announced proposed new regulations that would force food processors to reduce the amount of salmonella bacteria found in some raw chicken products or risk being shut down.

The proposed U.S. Department of Agriculture rules would declare salmonella an adulterant — a contaminant that can cause food-borne illness — in breaded and stuffed raw chicken products. That includes many frozen foods found in grocery stores, including chicken cordon bleu and chicken Kyiv products that appear to be cooked through but are only heat-treated to set the batter or breading.

The agency notified producers of the proposed changes on Friday.

USDA Deputy Under Secretary for Food Safety Sandra Eskin said it marks the beginning of a broader agency effort to curtail illnesses caused by the salmonella bacteria, which sickens 1.3 million Americans each year. It sends more than 26,000 of them to hospitals and causes 420 deaths, according to Centers for Disease Control and Prevention data.

Food is the source for most of those illnesses. 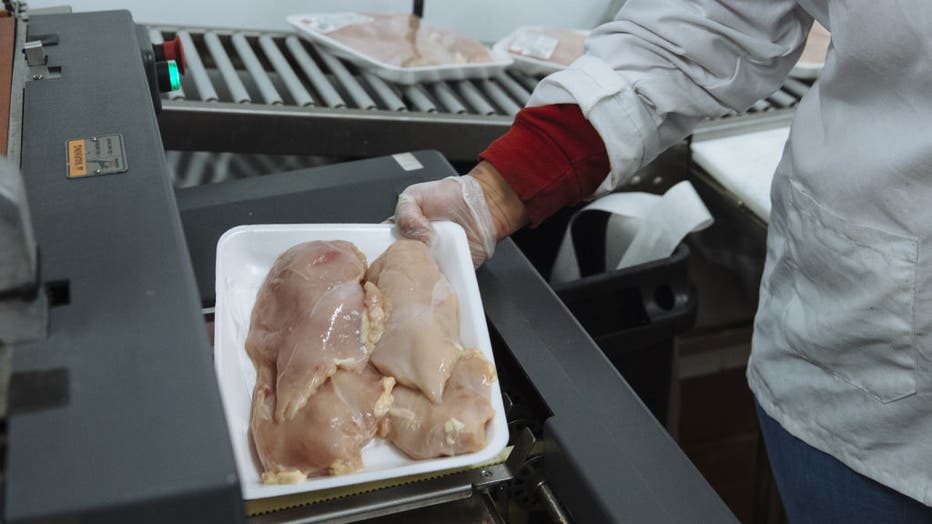 FILE - A worker places chicken breasts in a machine to be weighed and packaged in Paramus, New Jersey, on May 12, 2020. Photographer: Angus Mordant/Bloomberg via Getty Images

The CDC says approximately one in every 25 packages of chicken sold at grocery stores contains salmonella bacteria.

The USDA currently has performance standards that poultry processing plants have to meet to reduce contamination, but the agency cannot stop products from being sold. There is also no adequate testing system to determine levels of salmonella in meat, Eskin said.

The proposed new rules require routine testing at chicken processing plants. Products would be considered adulterated when they exceed a very low level of salmonella contamination and would be subject to regulatory action, including shuttering plants that fail to reduce salmonella bacteria levels in their products, Eskin said.

"This action and our overall salmonella initiative underscore our view that our job is to ensure that consumers don’t get sick from meat and poultry products," she said. "They shouldn’t be sold if they’re contaminated to the degree that people get sick."

In 1994, the USDA’s Food Safety and Inspection Service took a similar step by declaring some strains of E. coli a contaminant in ground beef and launched a testing program for the pathogen.

Eskin said the agency met with food safety experts and poultry processors for ideas on how to reduce contamination in processing.

Representatives of the National Chicken Council, a trade group, and Tyson Foods said they would withhold comment until they received details of the new USDA rule.

Diana Souder, a spokeswoman for Maryland-based Perdue Farms, also declined to comment but pointed out that the company belongs to the Coalition for Poultry Safety Reform, a group formed last year to work with USDA and others to reduce foodborne illnesses from salmonella contamination.

The new rules will be published in the Federal Register this fall and the USDA’s Food Safety and Inspection Service will seek public comment before finalizing the rules and setting a date for implementation.