NOKOMIS, Fla. - As soon as the light flashes to signal the end of the day at Laurel Nokomis School in Sarasota, the worry begins for parent Matthew Center.

"It's chaos out here," he said while walking to meet his children. Center has watched close calls and students dodging cars on the busy roadway beside the school and says it's a matter of time before someone gets hurt.

"The amount of students being picked up by their parents in cars is being compounded by traffic that’s obstructing the intersection to the school, as well as all the cars that are parked on the shoulder," he said.

Since last year, the Sarasota County School District said more than 200 additional students have enrolled at the school, increasing activity within – and the overall usage of – the car rider loop.

"I have to constantly be on the side of the road, trying not to get hit," said Tabytha Nei, a 6th-grade student. 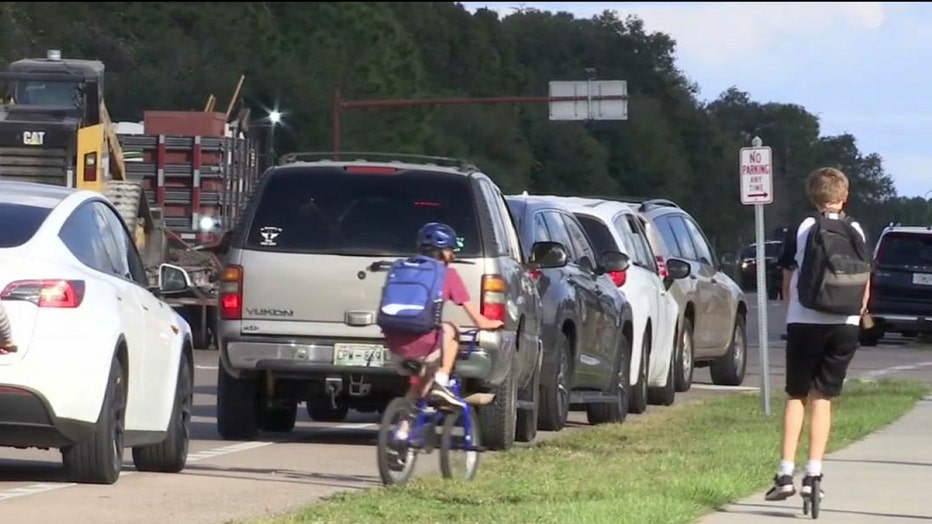 Some parents are parking in areas marked ‘no parking.’ They pick up their students where others should be walking.

"Usually they fill the entire bike line. They block the crosswalk," said Bryan Nei, who has tried to get their attention. "I'll knock on a widow and say, ‘Excuse me, hey, tomorrow maybe not in the bike lane.’"

The Sarasota County School District said in a statement:

"The school district is working with Laurel Nokomis to explore an array of possible adjustments to the drop-off/pick-up area and processes, like bumping out the sidewalk area. While the Florida Highway Patrol and Sarasota County Sheriff's Office works to get the attention of drivers with tickets and warnings, immediate ways that families could help would be to carpool or utilize the school bus for a few days a week, even if it’s just in the mornings or afternoons for a few days."

Florida Highway Patrol Trooper Ken Watson said drivers and pedestrians are going to have to use some common sense until then.

"Let's think about the children, let’s think about safety. If you are parking on the side of the road, you are taking up the sidewalk, you are literally pushing those kids into the roadway that are traveling by foot or on a bicycle. Now we are taking an already dangerous situation and making it only worse," Watson said

Sometimes it works. Other times it doesn't.

Last week, a child was hit half a mile down the road. They are expected to survive.