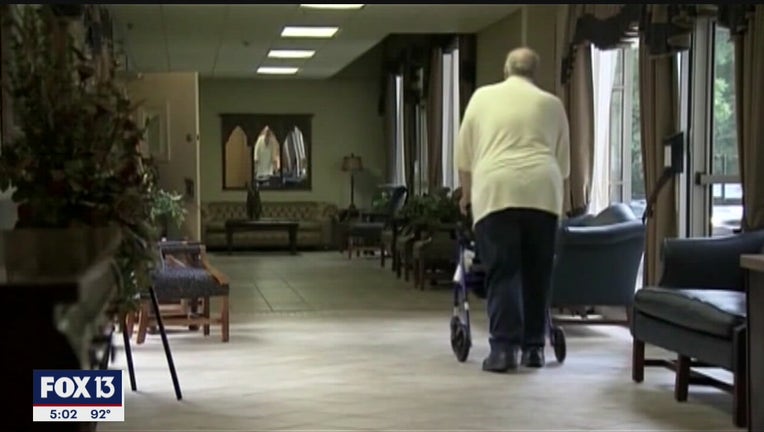 TALLAHASSEE, Fla. - Florida on Thursday ramped up plans to vaccinate seniors for COVID-19 by publishing two emergency rules that require nursing homes and assisted living facilities to allow representatives from the state health department, CVS and Walgreens into the facilities.

The emergency rules from Gov. Ron DeSantis’ administration also gave nursing homes and assisted living facilities until the end of Thursday to sign up on state-supported websites to participate in what’s known as the Pharmacy Partnership for Long-term Care  Program.

Announced by President Donald Trump’s administration as part of “Operation Warp Speed,” the government signed agreements in the program with CVS and Walgreens to coordinate efforts to bring vaccines to long-term care centers free of charge

The pair of emergency rules will remain in effect for 90 days but can be extended. Facilities that fail to follow the rules can have their licenses suspended, revoked or face administrative fines.

An expert in the spread of infectious diseases hopes to guide the way for Bay Area residents through what could be the final months of the coronavirus pandemic.

While facilities will be required to allow representatives of the health department and the pharmacy companies to enter and provide vaccinations, the rules say receiving the shots will be voluntary for residents and staff members.

“We are excited about this opportunity,” said Gail Matillo, president of the Florida Senior Living Association, told The News Service of Florida on Thursday.

Matillo, who serves on a Florida Department of Health vaccine advisory task force, said more than 90 percent of the 110,668 licensed assisted living facilities had already signed up to participate in the Pharmacy Partnership for Long-Term Care Program through a federal site.

“They want 100 percent (participation) so that’s why they (state officials) passed the emergency rules,” Matillo said.

The rules follow U.S. Department of Health and Human Services Secretary Alex Azar’s announcement Wednesday that 20 million Americans could receive COVID-19 vaccinations by the end of December. The administration maintains that 100 million could be vaccinated by March.

Meanwhile, the federal Centers for Disease Control and Prevention’s Advisory Committee on Immunization Practices agreed Monday that the first doses of the vaccines should be given to health-care personnel treating patients, workers and residents in long-term care facilities.

As of Wednesday, Florida reported 1,018,160 COVID-19 cases since the start of the pandemic, an increase of nearly 10,000 cases from the previous day. A Department of Health report also showed that 5,279 nursing home residents had COVID-19.

The Department of Health has until Friday to submit its final COVID-19 vaccine distribution plans to the federal government, but a draft version of the plan released in October made residents and staff at long-term care facilities and health care personnel a top priority for vaccinations.

Florida's governor says the state's plan for distributing the COVID-19 vaccine is similar to the CDC's strategy, with one added group.

DeSantis reiterated that sentiment on social media this week by posting to his Facebook account that “vaccinating long term residents first will reduce mortality with COVID significantly and will allow these facilities to return to normal operations, thereby reducing loneliness, despair, and the failure to thrive.” DeSantis added, “The goal should be to protect life and to make life for our (long term care) residents a life worth living.”

The governor followed up those comments by releasing a video late Wednesday in which he outlined the state’s priorities .

“The top priority will be our residents of our long-term care facilities. They are at the greatest risk and this vaccine could have a tremendously positive impact on them,” he said, adding that the second priority will be health care workers who are in high-risk and high-contact environments.

“To the extent we have enough, we want to start getting it out into the broader, 65 and over community, as well as those who have significant comorbidities” as a third priority, the governor noted.

Those comments were met with praise from the Florida Health Care Association, the state's largest nursing-home lobby.

“We all recognize how challenging the pandemic has been for our long term caregivers, residents, and their families. We also know that a vaccine is the best path for returning to some sense of normalcy,” the association’s executive director, Emmett Reed, said in a prepared statement. “We are optimistic about the plans to distribute and administer the vaccine quickly to our residents and staff. Nothing like this has ever been done before, but we believe the partnership that has been developed among our federal and state governments, CVS and Walgreens to vaccinate long term care residents and staff is the best approach to limit the spread of COVID and prevent further tragedies.”