Mason Dixon is a longtime morning host for Q105

"That's what radio does,” he told FOX 13. “You reach right through that speaker to those folks and let them know I'm here for you.”

For more than four decades, he's commanded the microphone on Tampa Bay-area radio, and sometimes the stage with legendary music artists.

"I actually had a chance at the Sun Dome to sit in and play guitar on a couple of songs with the Beach Boys. We broke 'Kokomo' for the Beach Boys and they always give Q105 credit for that when they're on stage. I took Rod Stewart on his first blimp ride,” Dixon said. “A lot of the stars that I've interviewed throughout the years, the reason they keep coming back and love doing interviews with me is because I talk to them like a human being and not like I'm grilling them.”

Dixon feels grateful that he's been able to do what he loves for as long as he has. A near-fatal car accident in 2005 gave him new purpose and perspective.

"I felt like there was something special going on there. God was sending me a message,” said Dixon. 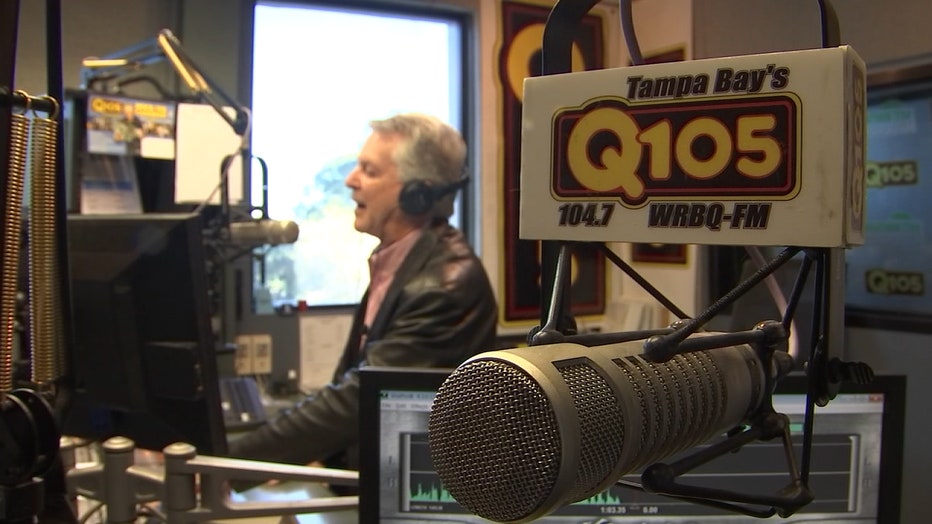 He created his Christmas Wish Fund to help families all across Tampa Bay.

"We've raised almost two million dollars and donated that back out to families in need," said Dixon.

His own family was part of that effort.

He said he wants to be the friend that the Tampa Bay-area has always been to him.

"Gave back to a community that opened a door and gave so much to us. That's the legacy that I want to leave behind. I'm still having fun, I'm still enjoying this," he said.

- Radio host Jack Harris reflects on career, life in Tampa
- Tampa Bay-area radio host Mason Dixon shares his most memorable moments
- Local radio host Ann Kelly has been on airwaves for decades
- Ron Diaz, the ‘Godfather’ of local radio, started in Tampa Bay four decades ago
- Starting off as an intern, radio host Mike Calta has risen through the ranks