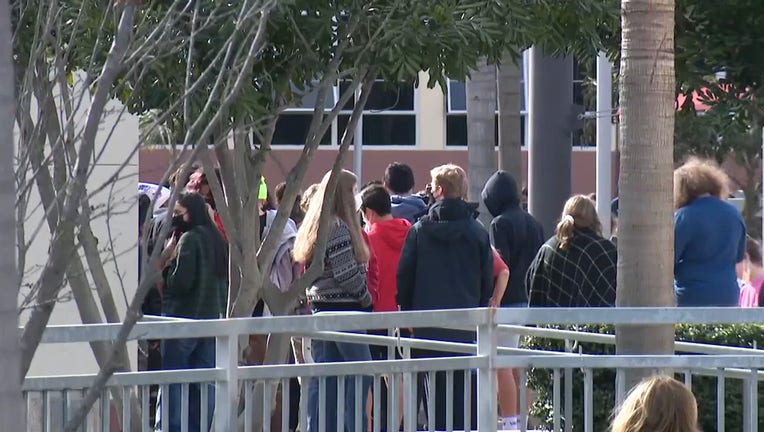 Students in various school districts across the U.S. have held walkout protests this week over safety concerns about in-person learning due to the current surge of COVID-19 cases in the country.

Many of the participants are lobbying for remote learning options or more stringent testing procedures in their district amid the spread of the highly contagious omicron variant, which is already causing teacher shortages and lower attendance among students.

Some of the country's biggest school systems have reported absentee rates around 20% or slightly more, with other individual schools seeing far higher percentages of missing students.

Some districts have already shifted temporarily to remote learning. Out of the roughly 100,000 public schools in the U.S., nearly 4,200 were closed to in-person learning as of Jan. 10, according to the community event website Burbio, which tracks K-12 school closures in all 50 states.

President Joe Biden on Jan. 13, 2022, directed his team to double its procurement of rapid COVID-19 tests to be delivered for free to Americans -- now totaling 1 billion at-home kits.

Meanwhile, the White House pledged to send an additional 10 million COVID-19 tests to K-12 schools each month, with the first shipments being delivered in late January.

Here are some of the walkout protests that have been planned or already held this week:

In Boston, students across the public school system walked out of class at 10:30 a.m. local time on Friday to demand remote learning options and stronger COVID-19 safety measures, according to the Boston Globe.

The Boston Student Advisory Council, which is made up of elected student leaders from Boston Public School (BPS), shared information about the "peaceful demonstration" prior to the walkout.

The study advisory council wrote a letter address to state officials that described teachers receiving expired antigen testing kits and two KN95 masks instead of the 30 that were initially promised, the Boston Globe reported.

"All across the city and state of Massachusetts students, teachers and staff are feeling vulnerable in their own schools," BSAC said in the letter, according to the newspaper. "Not due to gun violence, fights, etc… but due to the ongoing COVID-19 pandemic and the lack of protection that they were supposed to receive."

Meanwhile, Massachusetts Gov. Charlie Baker announced Tuesday that the state has placed an order for 26 million rapid antigen tests to be distributed over the next three months with priority to K-12 schools and other childcare facilities.

In Chicago, where the public school system already made headlines for canceling five days of classes amid negotiations with the teachers’ union, students also held a walkout on Friday.

"Chicago’s students are glad to announce that we will be walking out of our schools friday, january 14th [sic] at 12:30pm," read a message from Chi-RADS, a youth organization short for Chicago Public School's Radical Youth Alliance. "We stand with ourselves, our own safety, our own health. we keep us safe, we keep us loved."

Videos and photos shared on social media showed many groups of students staging walkouts at area schools, including at Senn High School on the city’s North Side and Solorio Academy High School on the Southwest side. Some students were also gathered outside the school district’s headquarters.

Chicago, the nation’s third-largest school district, faced a disagreement with the teachers’ union over COVID-19 safety protocols. Students finally returned to class on Wednesday after the full membership of the Chicago Teachers Union narrowly gave their approval to the hard-fought safety plan, which includes expanded testing and metrics to shut down individual schools during outbreaks. It passed with roughly 56% of the vote.

For parents and students in Chicago, the return to schools brought mixed emotions, along with staffing and attendance issues due to infections.

"We demand that our voices are not only listened to or heard but the voice of our concerns are implemented within structures," the Chi-RADS statement read.

In New York City, students already made headlines this week after videos on social media showed swaths of students walking out of Brooklyn Technical High School, a prestigious magnet school that specializes in science, technology, engineering and mathematics.

The walkout was in an effort to lobby for remote learning options and more stringent COVID-19 testing procedures, according to the New York Post.

"We don’t feel safe at school," a Brooklyn Tech junior told the outlet on Tuesday. "It’s pretty much that simple. There are so many cases going around and we think more should be done."

In Southern California, some students at Redondo Union High School (RUHS) demanded to make their opinions known by holding a walkout on Wednesday to advocate for virtual learning.

"These guidelines are fine, but what's the point if they're not being enforced," Michael Lee Chang, a senior at Redondo Union High School, told FOX 11 Los Angeles. "The largest clubs are still meeting at lunch indoors. You know, we're afraid."

"I'm seeing eight through 18 students missing from each of my classes right now. Mostly because they're out from COVID, but some because they're not comfortable dealing with the current problem of students who test positive for COVID or were exposed to it still attending school," Chang added.

The school told FOX News in a statement this week that "all concerns brought forth via social media, in regards to COVID protocols and safety, are addressed directly with the concerned student(s)."

In Northern California, a student petition was circulating that calls for the Oakland Unified School District to implement a number of measures, including the distribution of KN95/N95 masks, weekly PCR testing and more outdoor spaces to eat.

The petition, signed by a number of "concerned students," says if demands are not met by Jan. 17 the students planned to strike on Jan. 18 "by not going to school."

"Friday, January 21st, we will strike outside the OUSD Building and it will last until the demands are met," the petition says.

This story was reported from Cincinnati. FOX News contributed.