Investigators say a woman shot and killed one of two men who broke into her house on Old Welcome Road.

LITHIA, Fla. - The tables were turned on a pair of home invaders during a break-in Wednesday night in Lithia.

Investigators say a woman shot and killed one of two men who broke into her house on Old Welcome Road.

“It’s a little bit scary knowing it’s so close to home because they're on my same easement,” said neighbor Ginger Akins.

Just before 9 p.m., Akins’ neighbors called 911 to report someone breaking in next door.

Deputies say two men broke in, made demands to the man and woman inside, and then attacked.  Investigators say while the man was being beaten up, the woman took matters into her own hands.

“During that incident, the female homeowner retrieved a firearm which was in the house legally and fired one round which struck the male victim...that was deceased in the ditch behind me,” said Frank Losat, with the Hillsborough County Sheriff’s Office. 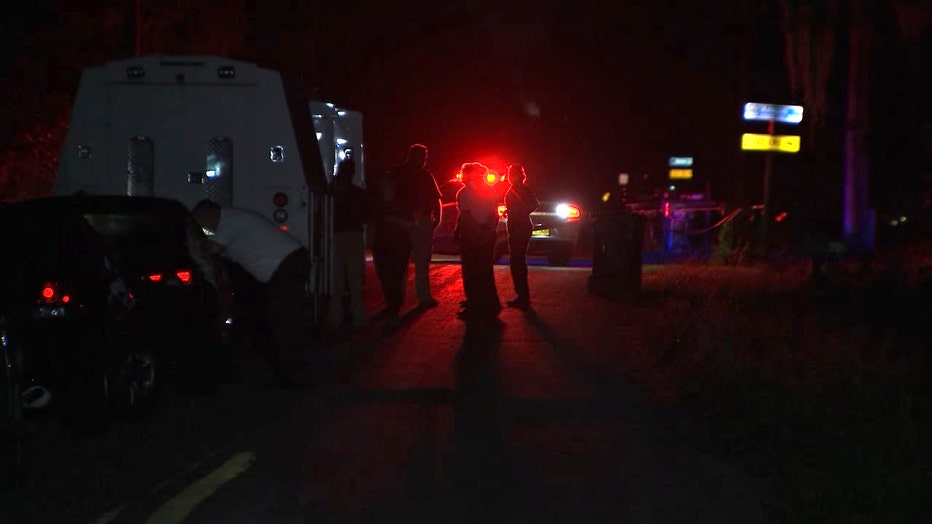 The crime scene of the deadly home invasion in Lithia, Florida. (FOX 13 News)

The other intruder got out and took off, and has yet to be arrested. The man who owns the home is in the hospital and in stable condition.

Meanwhile, deputies are focusing part of their investigation on the relationship between the victims and suspects. They say this was not a random attack, meaning the family was targeted for some reason.

“I would encourage, if any of the neighbors see any suspicious vehicles or anybody walking in the neighborhood that they do not recognize, to please call 911 do not approach this person as they may be armed,” said Losat.

On this Halloween day, a day based on make-believe scares, Akins and her neighbors are dealing with a real scare right in their backyards.

Anyone with information is asked to call Hillsborough County Sheriff's Office at 813-247-8200.