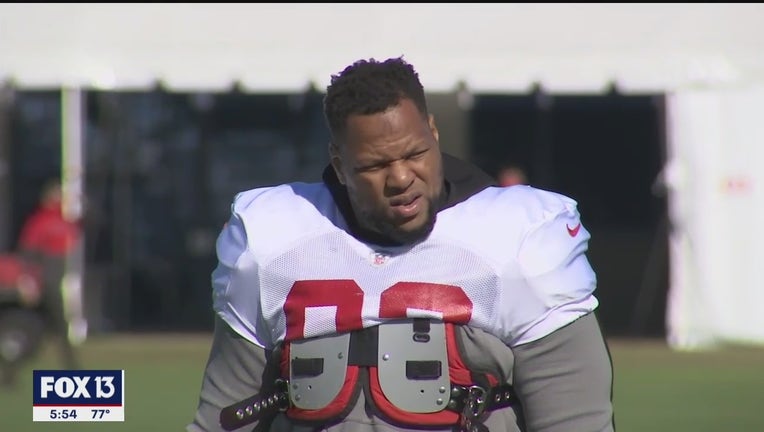 TAMPA, Fla. - During his 11 years in the NFL, Ndamukong Suh has had a journeyman career -- but in Tampa, Suh has found his home. It's where he's reached his pinnacle, and despite offers from other playoff-caliber teams during free agency, this is where Suh wants to be.

"Tampa was my first choice," said Suh. "It was always the ultimate goal to come back. I feel comfortable in that city. I have a great relationship with that staff. Like I said before and I’ve said many times before, I love playing in Coach Bowles’ defense."

Suh has done just about everything in his career from Pro Bowls to Super Bowls -- though 2021 just might be the best. Suh and his wife Katya just became first-time parents of twin boys just a few days ago.

"Life has been good, I'll say that without question," Suh said of his twins, Kingston and Khari. "They're actually amazing. They like to sleep, eat and poop and keep that on repeat. So they're fairly pretty easy."

Suh is coming off his best year of production with the Bucs with six sacks with another one and a half in the Super Bowl.

He prides himself on his work ethic and durability. He's never missed a game due to injury in his career. His 147 consecutive starts are the most among all active players and he leads all front-seven defensive players in snaps.

"Because everybody knows the NFL has a 100% injury rate as we call it," Suh said. "Really, I call it a boo-boo rate. Because if you're smart and know how to take care of yourself and have a great team, then you're always going to be available. I've always prided myself on that."

Suh is looking forward to going for two this season and getting back to normal, even if that includes Bruce Arians' promise for a rough training camp.

"Well I hope he doesn't kick the stuff out of us during training camp," laughed Suh. "But I know it's part of the gig and that's where you really get into football shape. So I look forward to it."

He added, "I'm excited for it and getting back to sort of a normalcy... I think it's always going to evolve and change every single year. I think there are better ways that we can find, as teams and individually, but also as a league to get better and keep that longevity."