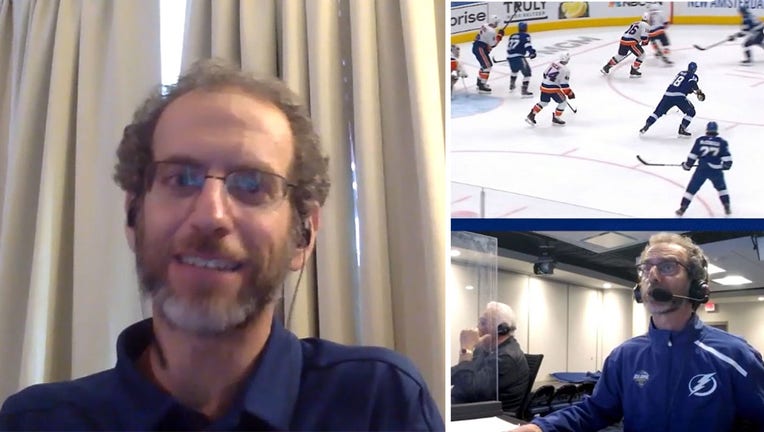 TAMPA, Fla. - The Tampa Bay Lightning are in the middle of a pursuit of their second Stanley Cup in franchise history.

The typical ways to digest a Bolts' matchup is either on television or on Lightning Radio, WFLA 970-AM. Until recently, radio only painted half the picture when it comes to their play by play announcer.

Those behind the team's social media decided: Why not take both forms of media and put them together?

So, they installed a camera next to Dave Mishkin, a play-by-play broadcaster on the radio station.

What viewers and fans learned was how dialed-in Mishkin to the Lightning -- and how animated he can be at the most pivotal times of the game.

Mishkin started his radio career while at Yale University, and said it was early on he knew what type of broadcaster he wanted to be.

"I made two palpable decisions on how I was going to call games," he explained. "I wanted to paint as clear of a picture as I could. The second conscience decision I made was that I really liked it as a kid hearing the announcers from my teams be emotional and show emotion and be passionate."

Tim Taylor, the former captain of the Tampa Bay Lightning, was also the assistant captain when the team won its Stanley Cup in 2004. He discusses both the physical and mental parts of playing the game during a Stanley Cup run.

In those social media videos, followers are able to see his partner, radio color commentator Phil Esposito, who is not phased one bit.

"He's used to me. I confess, I have no idea, or should I say had no idea, how he'd react," Mishkin said. "He'll definitely get animated and emotional but I was generally unaware, like many folk, that he tends to sit there and let me wind down before he chimes in."

Mishkin has about 30 years behind the microphone and roughly 17 of those are with the Lightning. He says it's all because he found three things in life.

You can find Dave not only on the radio but on the Lightning website where he contributes articles and other content.