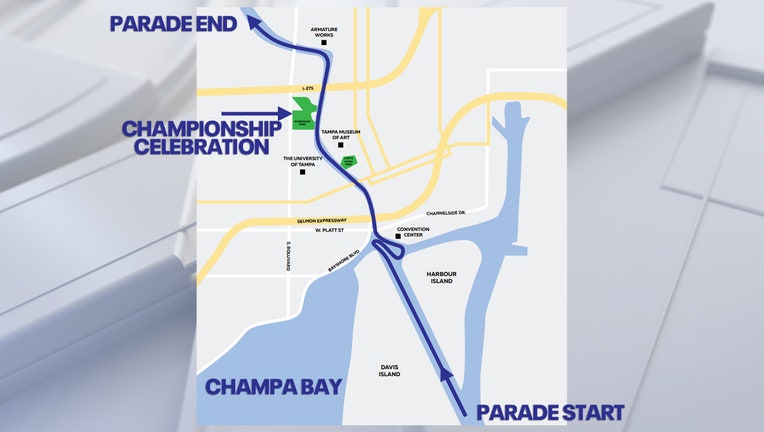 TAMPA, Fla. - Tens of thousands of Bolts fans will hit the Tampa Riverwalk Monday to celebrate the home team’s back-to-back Stanley Cup wins. It will be followed by a championship celebration after the parade.
Players will begin assembling for the parade around 10 a.m. Monday at Marjorie Park.

FOX 13's traffic reporter Mariah Harrison says fans can park in Ybor City and take a streetcar to the festivities. Otherwise, they can take their chances with downtown parking. The city suggests the Tampa Convention Center Garage, the William F. Poe Garage, or the Pam Iorio Parking Garage.

At 11 a.m., the boat parade will kick off from the Davis Island Yacht Club heading north towards the Tampa Riverwalk. The route follows last year’s route heading past Harbor Island, the Convention Center, the Riverwalk, Curtis Hixon Park, Julian B. Lane Park, Water Works Park, and Armature Works. Then, they will dock at Rick’s on the River between noon and 1 p.m.
No outside boats will be allowed to participate in the parade as fans are invited to watch via land.

While boaters can be in the water during the parade, the Tampa Police Department is asking everyone to follow directions from law enforcement and create a buffer zone. Alex Killorn was known for jumping on a jet ski during the NHL hiatus in 2020 and visiting other players to create "Dock Talk." He brought his jet ski to last year's Stanley Cup boat parade, and he did it again today.

Tampa police said they have divers on hand in case anyone tries to repeat Tom Brady’s viral boat-to-boat trophy-tossing moment from the Buccaneers' Super Bowl parade earlier this year. The Lombardi Trophy, safely hauled in by the sure hands of Rob Gronkowski, weighs in at 7 pounds. However, Lord Stanley’s iconic cup is almost 35 pounds.

"We have divers. If Stanley takes a swim, we'll get him back in short order," Mayor Jane Castor quipped.

Police are also asking everyone to come early and have a plan in place. Don’t drink and boat – instead, have a designated driver.

As far as the forecast, storms shouldn't impact the boat parade, but conditions could change for the after-party, says FOX 13’s meteorologist Dave Osterberg.

"Now once the parade is over and we start the whole ceremony process at 2 p.m. that’s when you need to keep an eye out," he said. "Once we get to about 3 p.m., all bets are off in terms of showers and thunderstorms. Until then, we should be OK." 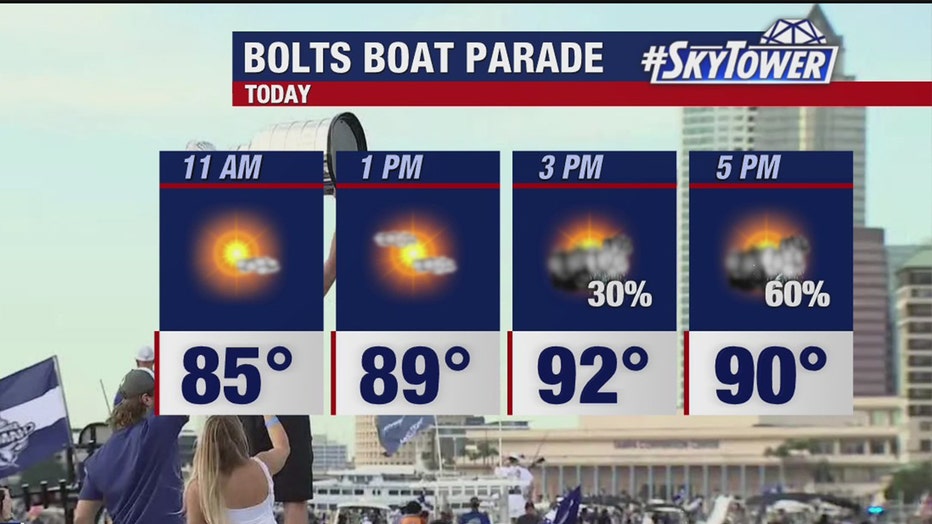 After arriving at Rick’s on the River, the players will board trolleys with their families and drive over to Julian B. Lane Park where the after-party will take place at Julian B. Lane Park around 2 p.m. The team will continue their celebration here.

The park will open to fans at 9 a.m. No coolers or chairs will be allowed but there will be plenty of food trucks and entertainment

Bars and restaurants along the Riverwalk are preparing for huge crowds, so much so, they’re even setting up extra bars along the water.

Over at Jackson’s Bar and Bistro, they’re opening up early and preparing to see as many as 50,000 people in and around downtown to celebrate.

There will be special performances by Vo Williams and Big Boi.

If you can’t be there in-person, the boat parade and celebration will also be streamed on FOX13News.com starting at 11 a.m.