This is exactly the time of the year that Tom Brady was brought here for - a December postseason rush. The Bucs haven't qualified for the playoffs in the last dozen years, so is too much being expected from one guy to get them there?

TAMPA, Fla. - Bruce Arians finds it laughable that anyone would suggest his Tampa Bay Buccaneers are entering an easy portion of their schedule, a four-game stretch with playoff implications that begins against the Minnesota Vikings.

A trio of teams that currently have non-winning records might stand between the Bucs (7-5) and their first postseason berth in 13 years. The surging Vikings (6-6) are nipping at their heels in a crowded NFC race.

After losing three of four to division title contenders entering last week’s bye, Arians said the Bucs certainly aren’t in a position to take any opponent for granted. Especially the Vikings, who’ve won five of six following a 1-5 start.

“Minnesota is one game behind us, and they’ll have the tie-breaker,” the coach said. “This is a huge game. We’re not looking by anybody, that’s for sure.”

The Bucs haven’t made the playoffs since 2007, the second-longest drought in the league behind Cleveland, which hasn’t earned a berth since 2002. Tom Brady was brought in this season to change Tampa Bay’s fortunes. The six-time Super Bowl champion said the focus down the stretch has to be on getting better each week and peaking at the right time as a team.

After facing the Vikings on Sunday, the Bucs will finish the regular season with road games against Atlanta and Detroit, as well as a home date against the NFC South-rival Falcons.

“What you’ve got to do is have competitive stamina. You’ve got to have the ability to compete every day through whatever the situation might be. ... I know we all wish we were 12-0 at this point. It’s not the reality. We haven’t deserved it. We haven’t played to that level,” Brady said.

“But what we have had is an opportunity to learn about each other, what things we’re productive at, what we haven’t been productive at,” the quarterback added. “Hopefully now, having a week off, understanding how we need to approach these things going forward, we can play really our best football. That’s what December is all about.” 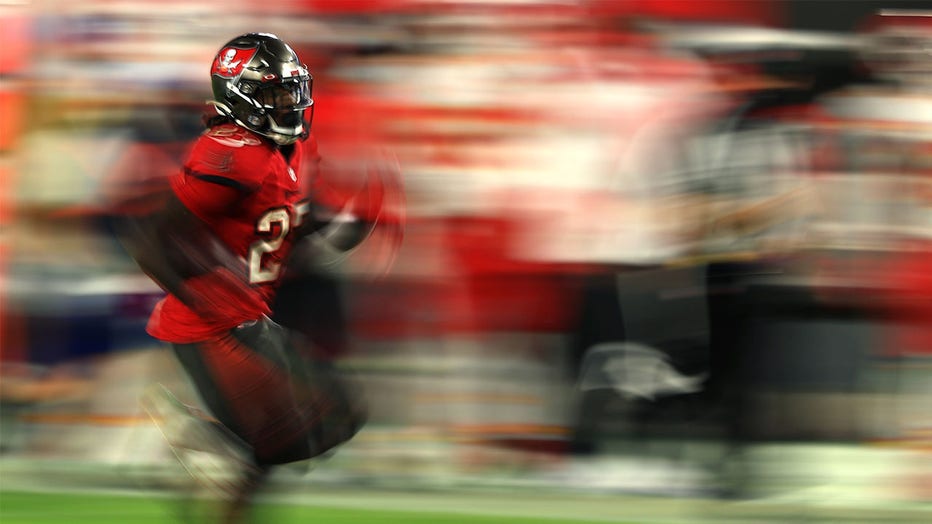 Ronald Jones II #27 of the Tampa Bay Buccaneers carries the ball in the third quarter during their game against the Kansas City Chiefs at Raymond James Stadium on November 29, 2020 in Tampa, Florida. (Photo by Mike Ehrmann/Getty Images)

If the playoffs started this week, the Bucs would hold the sixth seed in the NFC. The Vikings are in the seventh — and final — spot, with games against remaining against Chicago, New Orleans and Detroit after Sunday.

While Arians has openly talked to his team about the playoffs and the urgency to treat each outing down the stretch as if it were a postseason game, Minnesota coach Mike Zimmer has refrained from taking that approach with his players.

“Honestly, we’ve had to fight back so hard from where we started out to get in position to even mention the word playoffs. I’ve always kind of approached it like ‘You know what, let’s go out and put all our emphasis on this one particular game, and let’s count them all up at the end and see how that goes,’” Zimmer said.

“For a young football team like us,” Zimmer added, “I don’t think it’s the way to go when we’re talking about a stretch of four games when if we don’t win a lot of these then it doesn’t matter anyways.”

Like the Bucs, though, the Vikings relish being in position to control their chances in the race. Win every game, and they’re in.

The Vikings have been breaking in an especially young group of cornerbacks on the fly, with measured improvement after some rough performances earlier. Rookie Cameron Dantzler had his first interception last week, plus a forced and recovered fumble. Rookie Jeff Gladney and second-year player Kris Boyd are the two other regulars, mere kindergarteners when Brady won his first of six Super Bowl rings with New England, the last three with Rob Gronkowski.

“These guys are just so focused on trying to do their job. They can’t worry too much about the aura of the great players that they have,” Vikings coach Mike Zimmer said. “I think all of our guys, whether it be young guys or old guys, they like to compete. They like to play, and I think that’s what we’re going to have to focus on, and not how many Super Bowls Brady and Gronkowski have won.”

CAN YOU BELIEVE IT?

Bucs rookie safety Antoine Winfield Jr. starred at the University of Minnesota and is the son of Antoine Sr., who played the last nine seasons of a 14-year NFL career with the Vikings. The dad had an interception off Brady as a young cornerback playing for the Buffalo Bills.

Antoine Jr., a second-round draft pick, was watching film with his dad early in the week when the reality out what’s about to happen hit him.

“I was like, ‘Isn’t it crazy that I’m playing against the Vikings?’” Antoine Jr. said. “We laughed about it. I grew up a Vikings fan, watching my dad play up there. I’ve always loved the Vikings. I I watched pretty much all of their games ... so it’s going to be a cool experience.”

Vikings running back Dalvin Cook will play his first NFL game in his home state. The Miami native, who’s in his fourth year out of Florida State, is second in the league in rushing and first in total touches, yards and touchdowns from scrimmage.

“I just wish it was normal so I could be able to see my people and interact with them and catch up with them. It’s going to have to be a little brief conversation,” Cook said. “It’s always fun going back to that weather.”