Local sports bars were busy with fans showing their support for the Bucs. FOX 13's Jordan Bowen has more tonight on what this team means to the community.

TAMPA, Fla. - One thing Tom Brady certainly recognizes as he takes time to ponder his future: The Buccaneers roster next season figures to look a lot different — with or without the seven-time Super Bowl winner.

Unlike last spring when the Bucs defied the odds by retaining every starter from a star-laden lineup that won the franchise’s second NFL championship, general manager Jason Licht and coach Bruce Arians are not in a position to replicate that.

First of all, there’s the 44-year-old Brady and his impending decision whether he will retire or return for a 23rd overall and third season with Tampa Bay, whose bid to become the first team in nearly two decades to repeat as Super Bowl champs ended with a 30-27 loss to Los Angeles Rams in the divisional round of the playoffs.

Brady has one year remaining on his contract and has said in the past he’d like to play until he’s at least 45, maybe even beyond.

But after leading the NFL this season in completions, attempts, passing yards, and touchdowns — while also guiding the Bucs to the most successful regular season in club history — he’s not ready to say which way he may be leaning for 2022.

"I haven’t put a lot of thought into it, so you know, we will just take it day by day and kind of see where we are at," Brady said after Sunday’s loss. 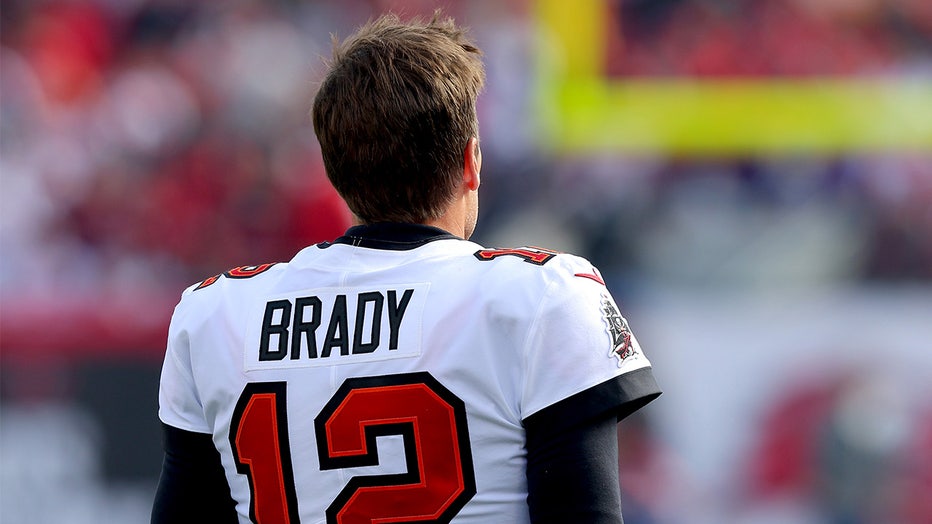 TAMPA, FLORIDA - JANUARY 23: Tom Brady #12 of the Tampa Bay Buccaneers looks on before the game against the Los Angeles Rams in the NFC Divisional Playoff game at Raymond James Stadium on January 23, 2022 in Tampa, Florida. (Photo by Kevin C. Cox/Get

Coach Bruce Arians reiterated Monday there’s no timetable for a decision from Brady.

"I haven’t talked to him yet," Arians said. "Take all the time he needs. We’ll see."

In the meantime, there’s plenty of other planning to do.

Arians said the goal as usual is to "reload" rather than rebuild, with an emphasis on re-signing as many of their own free agents as possible.

"We’ll see how many we can get back and then build the team from there. ... Each year is so different and so new," the coach said. "Last year, to get everybody back was amazing. Doubt we can do it all again this year, but we’re sure going to give it our best."

Like Brady, the 32-year-old Gronkowski is not rushing a decision about his future. The quarterback’s favorite target from their days with the New England Patriots was lured out of retirement when Brady signed the Bucs in free agency in 2020.

He has no regrets about rejoining the only starting quarterback he’s played with during an 11-year career, and shrugged off questions whether his decision would in any way be tied to what Brady does.

"It’s been an unbelievable ride. There’s no doubt about it. My decision of coming back was definitely solidified. ... I was very happy that I came back to play football, just being part of this organization," Gronkowski said.

And, is there a chance he might consider returning to the Bucs, even if Brady doesn’t?

"There could be a scenario like that. I’ll never throw anything off the board because you never know how anything’s ever going to play out. It’s the NFL. It’s one of the craziest businesses out there," Gronkowski said. "You see organizations just totally flip year in and year out sometimes. I’m really basically going to do, obviously, what’s best for myself in terms of the football world."

The Bucs (14-5) set a franchise record for regular-season wins with 13, won the NFC South for the first time since 2017 and defeated Philadelphia in the opening round of the playoffs. Nevertheless, they finished three wins shy of their goal of becoming the first repeat Super Bowl champions since the Brady-led 2004 Patriots.

"It’s never a success unless you’re putting rings on your finger and confetti’s (falling) on your head. But that only happens for one team," Arians said. "But I’m very, very proud of this team. We did not reach our goal, but I liked the way we fought to get there."

The finality of losing in the playoffs, especially after rallying from a 24-point deficit only to fall to the Rams on a last-second field goal, hit hard.

"A lot of these guys are on the last year of their contracts. I was the last one to walk in (the locker room). Seeing the look in everybody’s eyes, it was like: ‘This is a tough one.’ You hate to go out in such a manner," linebacker Lavonte David said.

"At the end of the day, you know that locker room isn’t going to be the same next year," David added. "You build relationships with guys, and to see them go out the way we did — some people are going to have to move on to certain places. It’s going to be tough because this is the most tight locker room I have ever been around."