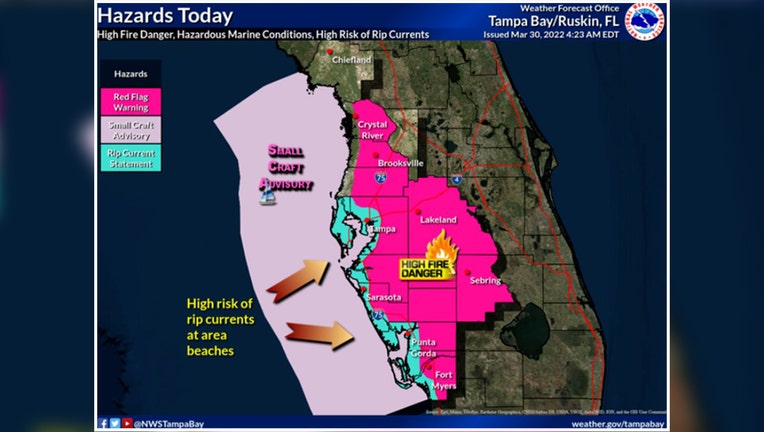 The National Weather Service in Ruskin has issued Red Flag Warnings from Crystal River to Sebring to Fort Myers, saying "critically low humidity" and gusty winds elevate the risk for spreading fires. The Red Flag Warnings are in effect from 2 p.m. to 7 p.m.

Additionally, temperatures Wednesday could reach 90 in some inland areas according to FOX 13 Meteorologist Dave Osterberg.

The relative humidity will be below 35%, especially in Polk, Highlands, DeSoto, and Hardee counties. Inland areas of Hillsborough, Sarasota, Manatee, Hernando, Pasco, and Citrus counties are also at risk.

Winds could add fuel to potential fires. A Small Craft Advisory and Rip Current Statement have been issued in coastal areas, pushing inland from the Gulf of Mexico.

NWS says any fires that develop will likely spread rapidly and outdoor burning is not recommended.

There is a chance for rain Thursday into Friday as a system moves southeast from the Panhandle, however, it does not appear to be a big rainmaker.