BRADENTON, Fla. - In Manatee County, the county administrator’s job is back on the chopping block.

Just last month, commissioners voted not to fire Cheri Coryea, but at Tuesday’s meeting, fingers were once again pointed at the longtime county employee.

The Manatee Board of County Commission meeting focused on many topics that were not on the agenda Tuesday. There were concerns about a meeting last week between commissioners Carol Whitmore and George Kruse possibly violating state law.

"I was surprised other commissioners were not told the meeting was taking place," said county attorney William Clague.

For the sake of being transparent, Kruse publicly admitted to an extramarital affair.

"Late last year I did the absolute worst thing that a person could do to someone they love," said Kruse.

He made the admission and added an accusation, that Whitmore had incriminating photos and tried to use them against him. 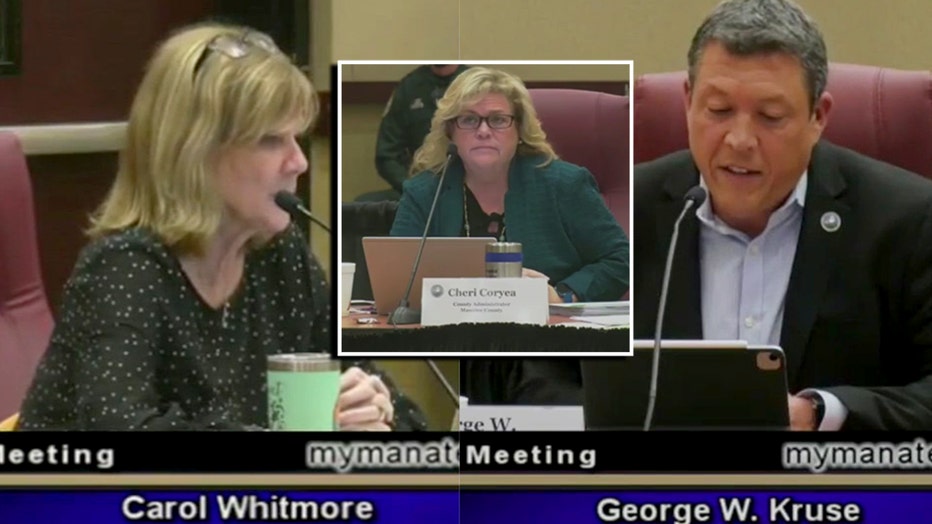 Commissioners Whitmore and Kruse apparently had a private meeting that involved photos regarding an affair, with Cheryl Coryea's knowledge

"I believe her intention for obtaining the pictures was to use them to manipulate votes on this board," Kruse explained.

Whitmore denied that, saying someone sent the images to her.

But Kruse also blamed County Administrator Sheri Coryea for her role in what he calls a deep-seated toxic culture and called for her to be terminated.

"This meeting last Friday reaffirmed my suspicions this administration focuses internally to friends and connections and not externally to those that matter most, you, the citizens of Manatee County," said Kruse.

However, not all board members felt the same way about the 30-year employee.

"Cheri has seven bosses, and if a boss asked her to set a meeting up or orchestrate setting a meeting up, that’s not a fire-able offense," Whitmore said.

In the end, the commissioners voted four to three to put Coryea's employment up for a vote in the future.

Kruse was one of three new board members who pushed for Coryea to be fired back in November. However, last month the commission voted unanimously for her to stay on as county administrator.