TALLAHASSEE, Fla. - Saying that “nothing in the emergency order requires any teacher or any student to return to the classroom,” a state appeals court Friday overturned a ruling that said Education Commissioner Richard Corcoran violated the Florida Constitution when he issued a July order aimed at reopening schools amid the COVID-19 pandemic.

A three-judge panel of the 1st District Court of Appeal, in a 31-page decision, flatly rejected the conclusions of Leon County Circuit Judge Charles Dodson, who in August sided with teachers unions that challenged Corcoran’s order. The unions argued, at least in part, that the order violated a constitutional guarantee of “safe” and “secure” public education.

The appeals court said the plaintiffs in the case lacked legal standing and were asking courts to decide “non-justiciable political questions.” Also the panel said the union’s arguments would require courts to violate the constitutional separation of powers and that they failed to show Corcoran’s order was “arbitrary and capricious.”

In addressing the standing issue, the appeals court said the plaintiffs “have not shown a causal connection between their alleged injury and implementation of the emergency order.”

Rowe also wrote that Dodson’s ruling “reveals the perils of judicial decision-making in this policy-laden arena.”

“To measure whether the public school system is ‘safe’ and ‘secure,’ the trial court would need to identify standards to make that measurement --- beginning by evaluating the risks posed by COVID-19,” Friday’s decision said. “And even if the trial court were qualified to isolate and weigh the safety risks posed by the virus, whether it is safe enough to reopen schools is not a binary question answered with a simple yes or no based on the latest public health metrics on COVID-19. The court would still need to consider many other factors to determine whether the state met its obligation to provide for safe and secure schools.” 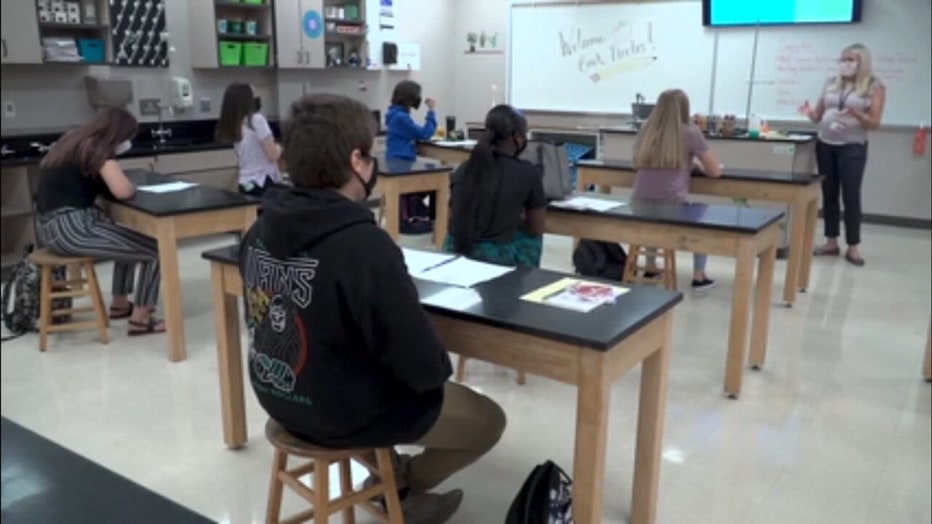 Corcoran issued the order as he and Gov. Ron DeSantis pushed for schools to reopen after being shuttered in March because of the pandemic. Students in the spring were shifted to online learning, but Corcoran and DeSantis argued that students and families should have a choice of in-person or online learning during the 2020-2021 school year.

The Florida Education Association statewide union and other plaintiffs, however, argued that teachers could be placed in unsafe situations if required to return to classrooms. Plaintiffs filed two lawsuits, which were subsequently consolidated, that challenged the constitutionality of the order.

A key issue in the dispute involved part of the order that dealt with the way public schools are funded. The order effectively conditioned a portion of money on school districts submitting reopening plans that included the use of brick-and-mortar classrooms, in addition to offering online alternatives.

In his Aug. 24 ruling granting a temporary injunction, Dodson said the order left school districts with “no meaningful alternative” about reopening classrooms.

“An injunction in this case will allow local school boards to make safety determinations for the reopening of schools without financial penalty,” Dodson wrote. “This is what the local school boards were elected to do. Every witness testified that any decision to reopen schools should be based on local conditions. Reasoned and data-driven decisions based on local conditions will minimize further community spread of COVID-19, severe illness, and possible death of children, teachers and school staff, their families, and the community at large. Such local decisions unequivocally serve the public interest.”

Some school districts in Florida say their county health officials were placed under state order not to offer recommendations on reopening schools, and that's making their job more difficult.

But Rowe in Friday’s decision wrote that the state “presented multiple rational reasons for reopening schools, including evidence that many students would suffer educational, mental, and physical harms if they were unable to return to the classroom.” Also, the decision backed Corcoran on the financing issue.

“The offer to provide increased state funding to school districts that reopen for in-person instruction is also rational,” Rowe wrote. “Without action by the Legislature or statutory waivers under an executive order, school districts would receive funding under existing statutes and rules that tie funding to student enrollment and offer lower reimbursement for online classes. But because the commissioner exercised his discretion to provide waivers from the funding statutes and rules, school districts were eligible to receive increased funding. Even if student enrollment decreased and the number of students enrolling in online classes increased.”

RELATED: State of Florida ordered health directors not to give yes-or-no input on school reopenings

Amid the legal battle, classrooms have opened at schools throughout the state, while many families have opted to have their children learn online because of the pandemic. The appeals court decision said Corcoran’s order gave school districts discretion about how to handle the situation.