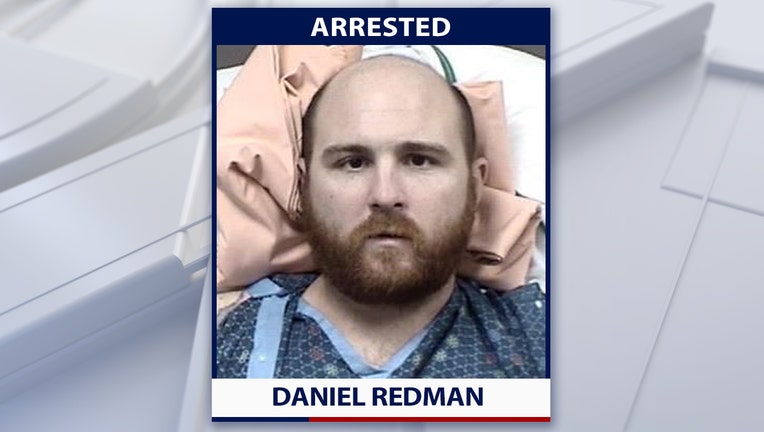 INVERNESS, Fla. - Deputies have arrested Daniel Arthur Redman, 29, of Inverness, on several charges, including premeditated murder after they say he shot and killed his 19-year-old brother, fled the scene and was shot by deputies after barricading himself in a nearby motor home with a hostage.

According to the Citrus County Sheriff’s Office, deputies responding to the area of East Dawson Drive on January 14 to investigate reports of a shooting found Brenden Redman, 19, lying in a driveway with gunshot wounds. He was taken to an area hospital where he died from his injuries.

Witnesses told deputies the suspected shooter, quickly identified as Daniel Redman, tried to break into their home before he fled on foot. Daniel Redman had been released from prison five days earlier.

With the help of a K-9 unit, deputies began searching for Daniel Redman and quickly located him at a motor home about a quarter of a mile away.

Deputies say when they made contact, they saw Daniel Redman holding another victim, with obvious injuries, hostage. Daniel Redman released the hostage after deputies ordered him to do so. However, when told to show his hands, Daniel Redman refused to comply and reached back toward his waistband. That’s when deputies shot him once, secured him and rendered first aid, until he was transported to the hospital for medical treatment.

On Friday, Daniel Redman was officially arrested and charged with possession of a firearm by a convicted felon, shooting/throwing a deadly missile into dwelling/conveyance, burglary with battery, premeditated murder and kidnapping with intent to commit/commission any felony.

"The immediate action and quick thinking our deputies demonstrated in this grisly situation speaks volumes to the rigorous training they undergo to serve our citizens," said Sheriff Mike Prendergast. "In this situation, every second counted, where our deputies were able to respond immediately and save the life of another victim.  I commend our outstanding team of professionals for their dedication and thoroughness during this difficult case."