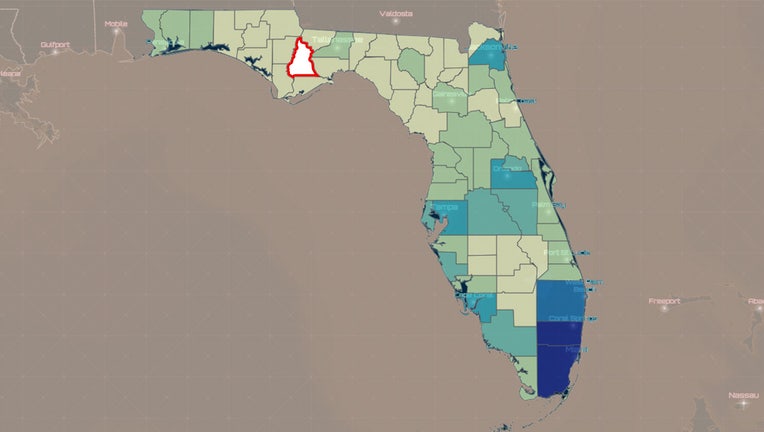 TALLAHASSEE, Fla. - Florida’s outbreak of the coronavirus has now infected more than 16,300 people, touching every county in the state but one: Liberty County, a rural enclave of 8,300 residents in the state’s panhandle.

As of Thursday, Florida had recorded more than 370 deaths, with about 2,300 currently hospitalized for COVID-19. Thursday’s latest statistics included about 1,000 additional infections and 50 new deaths.

The infections remain concentrated in South Florida, with the epicenter focused on Miami-Dade and Broward counties.

Gov. Ron DeSantis said during a Thursday press briefing at the state Capitol that he was working to further expand testing, including widening the criteria for who can get tested at government-run testing sites.

Priority has been given to health care workers, emergency first responders and seniors. The governor, however, did not elaborate on who might become eligible under the expansion.

DeSantis said he wants to test people who have had repeated close contact with somebody who contracted COVID-19 but never developed symptoms themselves.

“This idea of an asymptomatic carrier and then how they would interact with the public, I think that’s important to know now as we continue to work to slow the spread,” DeSantis said. “But beyond this period, people that are asymptomatic, how much are they spreading it? How many of them have it? I think those are going to be good answers to have.”

READ: How many in Florida have recovered from coronavirus?

Florida’s attempts to flatten the curve may be working

Experts are cautiously optimistic about how Florida's curve is shaping up.

The Florida Department of Emergency Management sent out one of the biggest shipments of supplies in the department’s history on Thursday, DeSantis said. The state of Florida was shipping 2 million surgical masks, 300,000 face shields, more than 50,000 containers of hand sanitizer, 500,000 shoe covers, more than 100,000 gowns and 350,000 gloves. That brings the total supplies sent out by the state to 5.2 million masks, 500,000 face shields, 4.75 million gloves and 275,000 gowns.

The outbreak has forced bars, restaurants and schools to close and has kept much of the state’s population at home as health officials attempted to slow the spread of the virus and asked Floridians to keep their distance from one another.

Social distancing guidelines have forced schools to shutter — and they will remain closed until the end of the month amid uncertainty over when the 2.9 million children who attend public schools can return to their classrooms.

While some states have suspended classes for the rest of the year, Education Commissioner Richard Corcoran and the governor say they have not yet come to a decision whether they will be following suit.

“If it’s safe we want kids to be in school,” DeSantis said during his press briefing.

“If we get to a point where people think that we’re on the other side of this, and we can get kids back in just for a couple of weeks, we think there would be some value in that,” the governor said. “It would be a return to normalcy for a little bit.”

Meanwhile, travails continued for the state’s jobless as Florida’s unemployment system remained overwhelmed by a deluge of claims for benefits.

The U.S. Department of Labor reported Thursday that the number of initial claims in Florida for the week ending April 4 fell by 58,599 to 169,885, even as state officials continue to work on adding servers and beefing up phone banks to help with unemployment claims.

However, Vause has been unable to say when applicants would begin receiving their benefit checks.

Despite those efforts, many of the state’s newly jobless continued to report problems with filing applications or getting help from hotlines.

The Department for Economic Opportunity unveiled a mobile app to help with applications, but it, too, was adding to frustrations among some benefit seekers who could not log in.

Universal Orlando Resort and Universal Studios Hollywood are extending their closures through May 31, the company announced Thursday. This includes the theme parks and Universal CityWalk in Florida and California.

Full-time employees will be paid at 100% through April 19, but pay and workload for most workers will reduce to 80% after that, according to a Universal statement. The company plans to furlough part-time hourly workers beginning May 3. Universal said it will continue to cover benefit plans for employees who have them.