Hillsborough County deputies say a woman picking up a child got into an argument with the bus driver and then rammed the bus.

RIVERVIEW, Fla. - A dispute at the bus stop pickup landed a Hillsborough County woman in jail after deputies say she rammed the school bus with her car. 34-year-old Ashley Moore is charged with Aggravated Assault with a Motor Vehicle and Culpable Negligence.

It was Tuesday afternoon in the area of Herons Path Place and Early Run Lane in Riverview. A veteran driver, subbing on this particular route, had one student left, a kindergartener from Collins Elementary. Because students in this grade are new to riding the bus, the policy with them is more strict.

"When any kindergarten student is on a bus, when we get to the bus stop in the afternoon, a parent or adult must be there for that child before a bus driver can release that child to them," said Tanya Arja, spokesperson for Hillsborough County Schools. "If there is no adult or parent for that child, then, they return the child back to the school and they will then contact the parent at the school."

Moore was parked at the bus stop. She is the maternal guardian of the child on the bus and, biologically, the child's aunt. According to district policy, the driver must be out of their vehicle to meet the child before they can be let off the bus.

The driver yelled out to Moore that she needed to exit her vehicle. In bus surveillance video, you can hear the driver say, "I need you out the car, I can't have you in the car, I don't know who you are."

When Moore didn't get out, the driver yelled, "Well, then, you’re going to have to go to the school to get him. I can't be yelling at you, baby. I'm not going to yell at you out here." 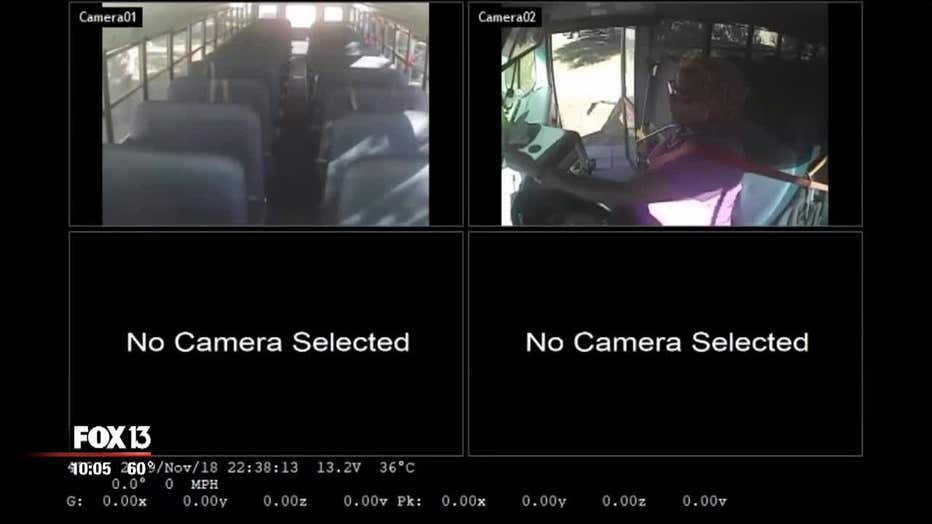 Bus surveillance video shows the driver trying to talk to the woman who was picking up a child. (Hillsborough County Schools)

The bus driver closed the door. Seconds later, as the bus began to move, deputies say Moore drove into the bus' path and intentionally rammed it with her car.

The bus driver immediately stopped and called dispatch, saying, "I need police at Herons Path and Early Run. I just had a parent literally run into my bus to prevent me from taking her child back to the school because she did not want to get out of her car."

Arja said the bus driver did everything by the book. "It's a shock that anyone would purposefully ram into one of our buses when their child is on the bus," Arja said, "when the driver is just doing what she can do for the safety of that child."

Neither the driver nor the student was hurt. When deputies arrived, they arrested Moore and took to her off jail.

"We understand that a parent or guardian could get upset but we would rather a parent be upset than make a mistake and leave a child with somebody that is not known to the child," Arja said.

According to arrest records, Moore has bonded out of jail. We've made several attempts, but so far, have been unable to reach her for comment.

The Florida Abuse Hotline and School Resource Section have been notified of the incident.

"We value the safety of our children in Hillsborough County more than anything, and we will not stand for someone putting a child's life at risk," said Sheriff Chad Chronister. "This woman's actions were irresponsible and completely uncalled for, since the bus driver was simply doing her job to protect the child on board. Aggressive behavior like this on the roadway is unacceptable."